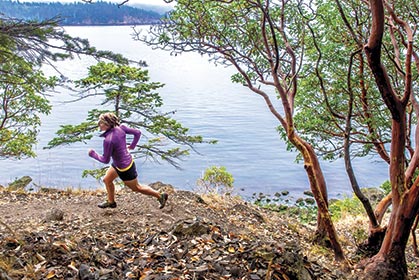 Many trails on Orcas Island offer expansive views of the surrounding waterways and mountains. Photo by Austin Lottimer.

This article appeared in our December 2014 issue. Want more? Subscribe to Trail Runner.

Off the coast of Washington State lies Orcas Island, the largest among a cluster of lush, rain-forested islands known as the San Juans. Their jutted, rocky shores pierce into the dark water of the Salish Sea, a winding network of intercoastal waterways that curl between British Columbia and northwest Washington.

An archipelago of over 400 islands makes up the San Juans, but Orcas Island is perhaps the best hidden gem for trail runners. While it’s true that trail mileage is limited (it’s an island after all), you can happily pound out more than 100 miles on Orcas. A third of that can be completed on the trails that weave through Moran State Park.

“You feel isolated on the trails here without ever actually being far from help,” says Randall Gaylord, president of the Orcas Island Trail Runners, a small handful of folks who meet for casual runs as often as they can. “I’m always looking for runners, so if anyone calls me I try to run with them.” 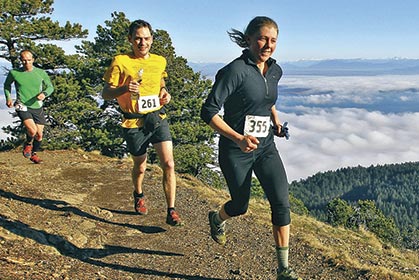 Runners in the Orcas island 25K/50K. Photo by Glenn Tachiyama.

After just one visit to Orcas in 1978, Gaylord and his wife moved there to raise their kids. He works as a prosecuting attorney on neighboring island Friday Harbor, an eight-mile motorboat commute every morning and evening, but has no interest in moving to be closer to work.

“I live here because of the running,” says Gaylord. “We have wonderful state parks with great trail systems, excellent climbs, technical and nontechnical terrain and landscape diversity.”

Like much of the Northwest, it’s cool on Orcas Island. Summer temps rarely exceed low 70s in the warmest months (July and August). In the winter, the mercury might creep down to the mid-30s, but most often remains in the 40s. Due to the rain-shadow effect of the Olympic Mountains, the islands lock in 240-plus days of sunshine, unlike Seattle, their neighbor 65 miles to the south; the rainy city receives upward of 150 days of annual rainfall and over 200 cloudy days.

The summit of Mount Constitution, the highest point in the San Juans (2,398 feet), lies within Moran State Park. It can be reached by trail or paved road, so you may not have it all to yourself, but the courtyard-like viewpoint offers the most expansive views of Puget Sound. Deep, blue water, speckled with green and rock, stretches endlessly. Far in the distance, white, glaciated peaks pierce the horizon and offer sharp contrast to the calm, rolling water.

On the opposite end of the island from Mount Constitution, Turtleback Mountain sits within a 1,576-acre nature preserve that has about seven miles of trails. Dozens of other, little-traveled dirt roads hidden below forest canopies offer even more reprieve from the pavement.

“What makes running there so great is that the trails weave their way through old-growth forest, by mountain lakes and below waterfalls,” says James Varner, a Pacific Northwest trail-running icon who directs over a dozen area races under the moniker Rainshadow Running. Among those are 25K and 50K races on Orcas.

Much like Gaylord, it only took one visit for Varner to grow enamored with the island’s trails: “I went there to visit my sister who was working at the Rosario Resort for a week. I went for a different five-to-10-mile run every day and was blown away by how fun, hard and scenic the trails were. … I just couldn’t believe a place as cool as Orcas didn’t already have a trail race.” 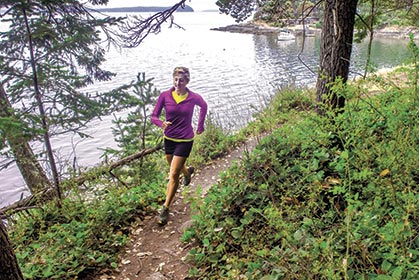 The author enjoys a stretch of pristine singletrack. Photo by Austin Lottimer.

As we drove off the ferry and down the main artery that meanders through the main town, Eastsound, we marveled at its colorful boutiques, coffee shops, art galleries and restaurants. We continued down a two-lane highway, passing through Moran State Park and by pedal boaters in a sparkling lake adjacent to the road.

All around us, a bright blanket of moss crawled through the thick, lush woods. Small, spotted white-tailed deer casually grazed throughout the misty hillsides. Towering Douglas fir trees and vines curled around fences beneath a sun-spattered sky.

Forty minutes later, we reached our accommodations for the week. A glorified camping retreat tucked close to the shore in a private cove, the Doe Bay Retreat is complete with cabins, yurts, geodesic domes, campsites, a hostel, organic garden and cafe, and, best of all, soaking tubs and saunas (clothing-optional) with views of the bay offer quiet, meditative reprieve.

The next morning, I ascended the Mount Constitution trail slowly, stopping often to snap photos. Stepping lightly on the soft trails, I inhaled the sweet decay of the old-growth forest floor.

Some 2,400 feet of elevation gain and about five miles later, I stood on the summit. Morning fog was lifting and the waters of Puget Sound were glassy. I could see a ferry in the distance, a fishing boat and a few sea kayakers. I sat down to soak it all in: the morning breeze, the smell of the sea and the sound of boat motors humming in the distance.

Whether it’s Puget Sound’s misty-morning waters, the miles and miles of soft trails, the mountain or sea access, the 250 species of birds, the whale-watching opportunities or simply the relaxed pace of life that a water-locked place provides … whatever it is, Orcas Island is no doubt a must-visit stop on your trail-running vacay list. Trust me.

>Seasons: While the mild climate allows for year-round running, spring and fall offer the sunniest days and least amount of ferry and trail traffic. Peak season lasts from July to September, when daily highs average in the low 70s.

>Getting there: Both car and passenger ferries run daily (round-trip cost is about $50 per vehicle, depending on where you travel from). A car is recommended, although biking, or even hitchhiking, are options.

>Accommodations: Doe Bay Retreat offers everything from furnished cabins to primitive campsites at a reasonable price. Guests can take advantage of yoga classes, massage, kayaks and an on-site restaurant filled with fresh produce from the Doe Bay Garden. Ask about volunteer exchange opportunities.

Or, for truly luxurious digs, check out the Rosario Resort and Spa adjacent to Moran State Park. rosarioresort.com

>Good eats: Finish a morning long run with an egg sandwich at Mia’s Café in Eastsound, which Gaylord calls “the best breakfast joint on
the island.”

>Amenities: Take a dip in one of the island’s many lakes before grabbing a brew at the Island Hoppin’ Brewery, just outside of Eastsound’s city center. Enjoy microbrews in their cozy tasting room, or take home a growler.

>Mount Picket. This old logging road boasts a smooth, nontechnical reprieve from technical terrain. According to Gaylord: “It’s in a very mature forest so there is little understory. Its mossy softness is unmatched.”

>Mount Constitution. Since it is the most famous mountain in the San Juan chain, it can be crowded late in the day, so head up to the summit early. With over 30 miles of trails in the Moran State Park network, it’s easy to tailor varying loops. Trails are wide and well maintained. parks.wa.gov/DocumentCenter/Home/View/1910

The Wildest Kind of Trail Running You’ve Never Heard Of