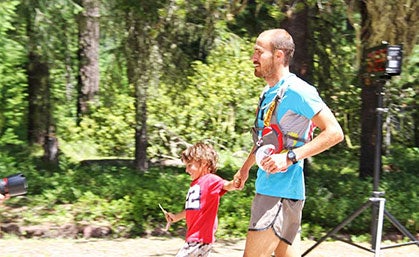 The author is led by his son, Cairo, to the finish line of Oregon’s Mt. Hood 50. Photo by Katie Hendrickson.

Editor’s Note: The original version of this piece appeared at Columbia Corridor Corredor and is our top pick among entries into the October Trail Runner Blog Symposium: “Should kids be allowed to run ultras?” To read other readers’ opinions  on the subject, see our October 2013 Symposium Highlights.

Each year, more and more people of all ages, abilities and experience levels want to challenge themselves to do something beyond the traditional marathon distance. The recent growth in popularity of ultrarunning has to do, in part, with the fact that many ultras are run off-road in wild, often remote places. John Muir observed, “Thousands of tired, nerve-shaken, over-civilized people are beginning to find out going to the mountains is going home; the wilderness is a necessity.”

As the majority of communities continue to grow around population centers, it is only natural that counter-communities grow up in defiance of the trend toward centering our lives on urban life. One such community is the ultra community. Those who take to the trails find a welcome reprieve with others that intentionally try not to bring with them the fast paced craze of the work world–leading to a much less egotistical, much more egalitarian community that embraces others who enjoy hours in nature with tasty treats and drinks.

Naturally, such an inclusive counter-community would want to avoid the historical institutional prohibitions and discrimination of its shorter distance predecessors. As a matter of principle, people of all ages, genders, races, education & income levels should be allowed to participate in ultras. Unfortunately, simply because something is right or popular does not mean that allowing everyone that wants to participate can reasonably be done without some challenges. Fortunately, as ultrarunners we embrace challenges, so I’ll list a few of them and we can figure out how to overcome them.

One of the challenges of the growth of the sport is that races, particularly remote trail races, fill up quickly. By opening the races to an ever-growing segment of interested young individuals that means the problem of races filling up within minutes will continue to grow worse. This might be one reason some don’t want kids to participate in ultras.

Another reason some may feel concerned over the desire of some youngsters running ultras could be the fact that by allowing some of these “kids” to participate, the level of competition increases and for a sport that has long been dominated by middle-agers, it is humbling to admit that a “kid” half your age has the ability and audacity to hang with the likes of oneself. Humility, even in ultrarunning, is not always easy to embrace.

The most common reason I hear for excluding kids from ultras is that it is not good for them. This is the same argument that has been disseminated by overweight medical professionals since time immemorial. I hear it all the time about my own running and about athletes I coach. I agree that it can take years to develop the stamina and strength to endure even a modest 50K, however, I don’t believe that only adults are capable of safely covering such distances. As a general rule, running is generally better than not running, and running more, through a gradual build-up, is generally better than running less or not running at all. The risks of muscular, skeletal, cardiac or pulmonary stress are no worse for those running ultra distances at young ages than the far more common practice of ultrasedentary lives of ultragaming.

If I have a choice between staying inside seated in front of a computer all day or being outside, upright and moving I will always choose the latter. Shouldn’t kids have the same choices? Society needs more and more kids constructively dealing with ADHD, depression, anxiety, obesity, diabetes and all of our other self-imposed maladies through activity in the outdoors, not fewer.

Despite the great benefits of ultrarunning, we must remember that ultrarunning is unique in its ethos. We do not want to lose the healthy vibe of the sport with the influx of kids who really don’t want to do it whose parents push them into it prematurely. Nothing is less motivating than being forced to do something innately optional to fulfill another’s ambitions. The intrinsic rewards for participating in ultras will be greatly diminished if personal drive and communion with fellow runners and volunteers are limited by the overbearing ambitions of parents.

If kids want to run ultras and they can figure out how to safely prepare for and complete them they should be permitted and encouraged to do so. But if kids aren’t ready or don’t want to they should not be coerced, manipulated or incentivized into doing them. It will ruin their relationship with parents, ruin the sport and ruin the potential fulfillment they could ultimately find in an activity and community that is socially, mentally, physically, emotionally and spiritually healthy.

Jacob Puzey is a high school teacher & coach in Hermiston, Oregon. When not training with his high school XC/track athletes he is usually exploring wild places with his family and friends. Find his blog at columbiacorredor.com.