An excerpt from Beyond the Marathon: Insights into the longest footrace in the world 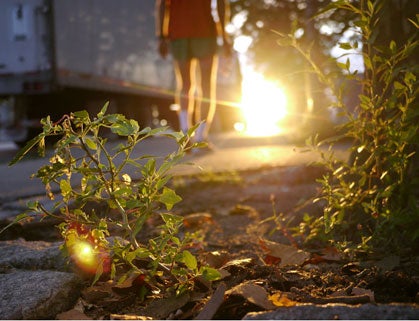 Founded in 1997 to exemplify the endless possibilities of the human spirit, the Self-Transcendence 3100-Mile Race is held every year around a city block in Queens, New York. Founded by spiritual leader Sri Chinmoy and heralded as the “Mount Everest of Ultramarathons,” the Self-Transcendence ultra requires runners to complete 5649 laps around the block, averaging a minimum of 60 miles a day for 51 days.

Four-time finisher Grahak Cunningham recently released an ebook meditating on his experiences. Below is an excerpt from the chapter “Achieving Your Goals”, available at www.grahakcunningham.com.

“A cheerful mind has always been a perfect guide to a healthy body.”
—Sri Chinmoy

The 3100-mile race is a microcosm of our normal lives. None of us function well under excessive worry and stress. It is pointless, achieves nothing and takes away energy. But in the beginning I got stressed all the time, and it was the most damaging thing in the race. Physical stress on the body was causing all sorts of problems. My immune system was battling. I had cold sores on the inside of my mouth, ulcers on my tongue and boils across my back and chest. This physical stress was tolerable: the mental stress was worse.

If I was behind in my laps I would become particularly tense. It was like having a pile of work building in front of me, getting bigger and bigger. Sometimes I would confuse numbers in my head while I was going around and then worry that a counter had missed a lap. I insisted they check again and again—but it was always me who was making the mistake.

Working out how far I had come and how long I had remaining added to the burden. Until the last day the home stretch isn’t visible in the 3100. It’s always an incomprehensible, upsetting distance to go. I was better off not thinking about it. I ended up hardly looking at the leader board in the counting area. I don’t think anybody did. There is a movie of us on YouTube that former news anchorman, Utpal Marshall, put together. On day 22 he asked all the runners how far they’ve gone. It makes us all look stupid. No one actually knows their exact mileage, umming and arghing before making an educated guess.

I learned the value of simplicity in the race. Someone once told me you can tell how complex your life is by the number of keys on your key ring. For the race I had two, one for my apartment and one for my bike lock. For more than seven weeks I didn’t have to worry about cooking or laundry or everyday chores. All I had to do was run. In his 2004 race, Arpan DeAngelo, a 70-time, sub-three-hour marathoner and one-time finisher of the 3100, told me he’d given cash to someone to make a shoe purchase. “At the time it felt really strange to touch money,” he said. Such is the 3100: it is like another world.

I found it hard to do anything complex, not just because it wasted time but it took too much mental effort. I didn’t change my playlists on my mp3 player once. A couple of times I tried. After finishing a day’s running I stared at a computer screen in a sleepy, dopey daze and gave up. To fill in time, Ashprihanal Aalto, the champion Finnish runner and multiple winner of the event, started telling riddles. I was so impatient I switched off as soon as he sidled up to me and launched into one. I hated them. I lasted about 30 seconds before I got a headache and begged him to tell me the answer.

Despite acing high-school calculus, when I got within range of finishing I had to get someone to work out the days remaining, I couldn’t do it. I had shut off all my calculating, mental faculties and given myself mathematical dyslexia but it was the best way to be.

Racing or competing against myself meant leaving my ego behind. In shorter races, I can say to myself, “I am going to run myself into the ground and pass as many people as I can.” In the 3100-mile race, if I had gone out with this attitude, I wouldn’t have lasted the first day.

I realized in essence happiness did not depend on my placing or my outer circumstances. It did not require owning the biggest house, the nicest car or the most fashionable  wardrobe—I was spending 18 hours a day clad only in running shorts and a T-shirt. I was not earning money or building my career. In fact, I was spending a fair chunk of my savings just to keep a sufficient layer of shoe rubber between the soles of my feet and the footpath. Despite the inconveniences, I was joyful. I was running and inspired: ordinary things were strikingly beautiful.

A Ukrainian and a Russian Are Currently Running 3,100 Miles Around a New York City Block for Peace