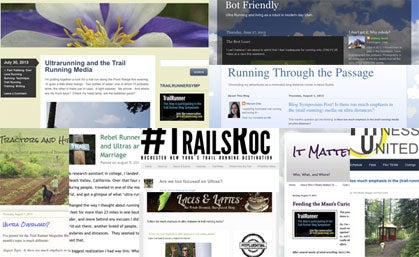 The August 2013 Trail Runner Blog Symposium topic of discussion was: Is there too much emphasis in the (trail-running) media on ultra distances?

Here, you’ll find a smattering of opinions from those who contributed to the Symposium, in which runners express a broad spectrum of feelings about media coverage of ultras—ranging from inspired to inadequate.

In our Editor’s Choice this month, Jenni Hulburt, reflects on what exactly it is about ultramarathons that’s so compelling.

Next month’s topic is: To be announced in mid-August. See here for directions on how to participate.

***Editor’s Choice
… Marcus Aurelius said it well: ‘The object of life is not to be on the side of the majority, but to escape finding oneself in the ranks of the insane.’ Ultrarunning isn’t typical. In fact, in a sedentary and overweight society, running itself isn’t really typical. The way I see it, we all need more insane, escape and adventure in our lives.
—Jenni Hulburt

Shorter distances attract faster runners by and large. There is an entire racing world dedicated to speed, but when I think of trail running, the essence of the sport is distance to me. Not everyone can run fast, but I think that almost anyone can run an ultramarathon with the right training, both mental and physical, and that is something that needs to be celebrated.
—Jessica Kuepfer, Laces and Lattes

Crossing that same finish line will be trail runners completing their first ever 5k with their legs aching and a wide proud grin lighting their fatigued faces.  They know that they too have just fought through the elements.  They too have pushed their physical and mental limits beyond their normal capabilities. They too have earned their bragging rights with the same energy, sweat and burning quads as the ultrarunners.
—Chantal Chala, Fitness United

We no longer satisfy ourselves with mediocre. We live for extreme. Extreme Home Makeover, Biggest Loser, the new reality survival show currently on network TV.  Vegan diets, Paleo diets, no-carb diets … We want faster results, faster phones, faster cars, faster finish times. Winning an Ultra is EPIC. Breaking a record at an Ultra—you are an Immortal. Where does that leave us mere mortals?
—Christy Bohon, Tractors and Hippies

Speed is important, but never as important as the story.  Distance can happen anywhere, but its not that impressive if its nothing much more than an odometer ticking away miles … Adding the word “ultra” to a piece of writing and expecting it to shine only works for cleaning detergents.
—Matt Thyer, Feet for Brains

I think the media likes to put emphasis on the ultra-distances because they have the elements of what a good news story should have; an interesting narrative, in overcoming personal or technical obstacles, unforeseen circumstances (blisters, a fall, weather), maybe a personal revelation and a mighty victory over all hardships at the end. Who doesn’t want to read about that?
—Sarah Young-McDonald, Running the Passage

I don’t know when my life evolved into this fantasy where every hobby I had needed to be some extreme endurance event, or some fringe society’s idea of ridiculous fun, some extreme challenge that “normies” don’t do. I can’t even remember what I used to do for fun before I was into running ultras.
—Lindsay Lauck, Bot Friendly

Our next event will be fun – Ready, Set, Glow! A night time trail run with the trail lit with glow sticks and a black light party at the end. It’s “only” five miles.  But it’s five miles of fun—five miles of single track—five miles of laughing and jumping rocks and logs with your friends while wearing a headlamp. Those five miles deserve as much attention as the winner of  Leadville. Why? Because those five miles might be someone’s Leadville.
—Eric Eagan, TrailsRoc

Through this increase in media awareness, I have been able to connect into the ultra distance world of trail running.  I found that there were races just above me that have been going on for years!  These weren’t figments of imaginations, they were real, and they were being run on the peaks above me.
—Christel Grange-Hicks, It Matters To …