Note: The TR Blog Symposium has been formally retired! Thanks to everyone who’s participated in it over the past two years. 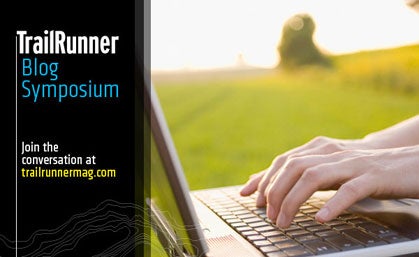 We’re on the lookout for the best and brightest ideas from the worldwide trail-running community, and we want to hear your voice.

Here’s how the Symposium works:
Each month, we’ll announce a topic of conversation for the trail-running community to hash out. You will have a couple weeks to write about the topic on your own blog and email us a link to it. We’ll review all entries, choose our favorite, publish it on trailrunnermag.com (with a link to your blog) and feature it in our Inside Dirt e-newsletter. All blog entries may be considered for print publication as well.

Why a Blog Symposium?

What if I don’t have a blog?

What are the rules?

What topics have been discussed in the past?

October 2014: Are lotteries a good way to manage admittance into popular trail races?

March 2014: What would you nominate for the best “old-school” trail race?

February 2014: Are tech gadgets more help or hindrance on the trails?

January 2014: Should there be drug testing at trail races?

December 2013: Is there too much emphasis on competitive results in the sport?

November 2013: Do trail races do unnecessary harm to the environment?

October 2013: Should kids be allowed to run ultras?

September 2013: As trail running grows in popularity, how should races adapt to prevent overcrowding on the trails?

August 2013: Is there too much emphasis in the (trail-running) media on ultra distances?

July 2013: What constitutes an “unfair advantage” in a trail race, and what—if anything—should be done to even the playing field?

June 2013: Tell about someone awesome you’ve met through trail running.

May 2013: Social media—boon or bane to trail running?

April 2013: Can trail running develop into an unhealthy addiction?