Take an ultralight rod on your next jaunt into the mountains, and you’ll see your favorite trails in a whole new way 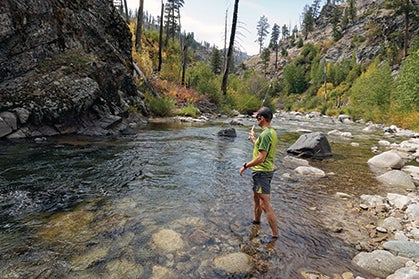 The author wets a (tenkara) line on the North Fork of the Boise River, Idaho. Photo by Steve Graepel

Water billowing around his calves, Jeff Flaker carefully wades out over mossy rocks into deeper water. He hunkers down, gently pulls back on his line and then releases it, slinging the amber braid and the trailing elk-hair hopper across the current, dropping it precisely at the head of the pool. The babbling brook seems to fade to silence as I watch his fly drift downstream with anticipation. Then, the surface erupts, the rod bows, adrenaline rushes and a smile cracks.

“This is going to be a good day,” proclaims Jeff, raising his arm to draw in the fish.

My trail-running partner Jeff, 45, of Boise, Idaho, and I had run seven miles upstream over a broken-granite trail pinched between vertical canyon walls and the North Fork of the Boise River in southwest Idaho, scouting along the way for large pools that would sustain a wild trout population. Eschewing the heavy tackle of western-style fishing, we each carried a tenkara rod, a 12-foot telescoping rod that collapses down to 12 inches and weighs a scant three ounces. We passed a few fishermen casting bait into the lower stream but pressed deeper into the wilderness until we found a series of remote pools that we could follow back toward the trailhead. 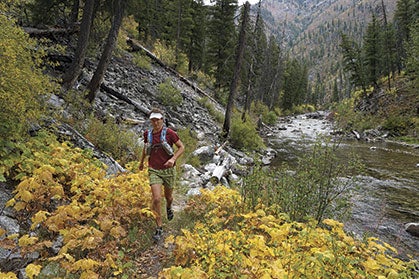 Running back down after a satisfying day along the river. Photo by Steve Graepel

Relatively new to the United States, tenkara is a traditional Japanese style of fly fishing dating back some 250 years. A rod, a line, a fly, no reel: its simple technique is tailor made for fishing tight, mountainous streams—the kind of water courses I often run next to while on an adventure run, like today’s.

Jeff grabs the line and cradles the twitchy rainbow in his hand, then gently removes the hook. At eight inches, it isn’t a lunker, but fish feel bigger on this ultralight kit. With a flick of its tail, the fish darts back into the current and out of sight.

We collapse our rods, spool the line and hopscotch from hole to hole until we both come up empty on a deep emerald pool. “Fish spend 90 percent of their life under water,” Jeff reminds me. “Try a nymph.”

I quickly swap my line, get back in position and flick the nymph—a fly that rides below the water’s surface—below a black basalt wall. Almost immediately, a strong tug yanks the tip of my rod. I instinctively set the hook and work the flash of liquid silver toward shallow water. Heart pumping, I grab the line and pull the 12-inch rainbow into reach. “Nice!” shouts Jeff.

Like the trail, the river sucks you into a place where time disappears. I look at my watch, surprised to see how fast the day has passed. We make our final casts, then pack it up for the run back to the truck.

It was indeed a good day, one of the most memorable we’ve ever had. The line, like the trail, has a rhythm and the excitement of anticipating what’s around the next bend. We agreed we’d soon return with rods tucked in our packs to explore new riverside trails, scouting for fish and future memories.

Tenkara is a natural fit for the trail runner or fastpacker, and, like running, is simple and relatively inexpensive. A complete kit can run between $160 and $260.

To get started, all you need is:
• a tenkara rod
• a tenkara line
• a line spool (to store your line when moving between holes)
• short length of lightweight tippet (suitable tippets come in 4X, 5X and 6X “weights”)
• a small collection of flies in a tin

Dress for tenkara like you would for any mountain run, and come prepared for rapidly changing weather. Because you you’ll be wading the stream, wear a shoe that drains well and has a low-profile tread (better traction on slick rocks). A neoprene sock isn’t a bad idea either.

Lastly, bring an open mind. You won’t pull down the miles like you do on an uninterrupted trail run, but you will see much more. You will become an observer, and learn to read the river like a trail, looking for the bend that flows easily and the pools that teem with fish. It’s a new way to engage with the places you love. And isn’t that what it’s all about?

Steve Graepel is an art director, medical illustrator and instigator. When not shuttling kids to activities, he is honing the art of premeditated leisure. This article originally appeared in our July 2015 issue.