Pro tips for making the most of your next ultra, whether it’s your first or your 50th 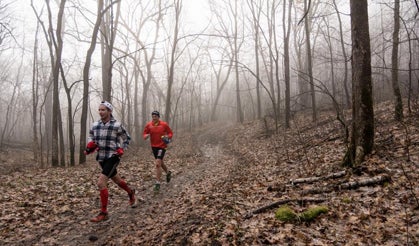 Michael Borst, right, takes it easy in the early stages of the 2015 Zumbro 100 Mile. Photo by Todd Rowe

This is part 1 of a two-part series. Read more tips for racing your best here.

When Michael Borst shot off the line of the 2014 Zumbro 100 Mile, he was going fast—too fast. Borst, then 20, of La Crosse, Wisconsin, was running his first 100-miler, and it wasn’t until halfway—when he broke his own record for the 50-mile course—that he realized his pace was unsustainable. Soon after, he was walking. He dropped from the race around mile 70.

One year wiser (and one second-place 100-mile finish later), Borst ran much of the 2015 Zumbro with two other competitors before breaking away late; he was rewarded for his more conservative tactics with the win, in 18:04:00, nearly two and a half hours under the previous course record.

Not everyone will have such a steep learning curve, but by following a few simple tips, newbie ultrarunners can increase the chances that their first ultradistance race—whether a 50K or 200-miler—will go smoothly. (Experienced ultra vets can learn a thing or two, too.)

Trail Runner asked three top trail/ultra athletes for their advice on training, pacing, nutrition and mental preparation. In addition to Borst, we talked to  2014 Western States champ Stephanie Howe, 31, of Bend, Oregon, and Ryan Bak, 33, also of Bend, an elite track athlete who, since transitioning to trail ultras less than one year ago, has earned runner-up finishes at the USA Track & Field Trail 50K Championship, the Way Too Cool 50K and the Lake Sonoma 50 Mile.

Sometimes, less is more. “Ultrarunners can get crazy with running mileage, usually at the expense of recovery and quality work,” Howe says. “Some can get away with a lot of volume and not get injured, but they will not have that upper gear [when they race]. Think ‘quality over quantity’.”

>Related: 3 Reasons to Consider a Low-Mileage Training Plan for Your Next Ultra

Bak now rarely runs doubles or seven consecutive days, and his easy runs have gotten shorter. He focuses instead on quality long runs of 20 to 35 miles, alternating between longer, easier long runs and shorter ones with a threshold workout or steady faster pace.

Don’t be a slave to the schedule. “Listen to your body and back off or take a day off if you are tired, even if you don’t have a scheduled day off from training,” Bak says. “It is not uncommon for me to have two-to-three-day stretches where I don’t run because I am busy with work and family. I try to avoid having consecutive weeks with unplanned breaks, but overall I just don’t fret it.”

If you can, get a coach.“I am a coach and I still use a coach,” says Howe. “A coach can help you with so much more than just a training plan. A coach can be there to help motivate you, build your confidence, answer questions and pull in the reins when necessary.”

Taper. This sounds obvious, but Howe says too many runners neglect it. “It’s hard to sit around and twiddle your thumbs going into a race, but it works,” she adds. “I usually run 70 to 90 miles a week, but drop it down to 20 to 30 the week before a race [and] usually take one to two days totally off. I usually go into the race feeling a little sluggish, but as soon as I get going it’s like magic.”

>Related: Lessons Learned by Elites in Their First 50-Milers

Don’t fear the distance. Racing 50 miles when your training runs top out at 30 miles, as ultrarunners often do, might seem absurd. But Bak points out that the same goes for any distance; first-time half-marathoners and marathoners don’t typically build up to the full race distance in training, either.

Relax. “So many runners get anxious and crazy pre-race,” says Howe. Remember, she advises, “It’s just a race. The hard work is behind you, and now it’s time to enjoy.”

Race by feel, not pace. This is a big one—just ask Borst. Don’t obsess too much about hitting certain splits; the terrain and duration of ultra races require that you downshift to a pace you can sustain for several hours to a day, or even longer.

“Instead of trying to maintain an even pace, you should focus on maintaining an even perceived effort,” Bak says. “Avoid spiking your heart rate on steep climbs and alternate running and power hiking during long, steep stretches … You body will be much better off in the later stages of the race if you don’t crush that climb in mile five.”

Eat early and often. This might sound simple, but, like tapering, but it’s easy to forget when it counts. “No one really likes to force down three gels an hour while racing, but those who do gain an advantage,” says Howe, who is also a Ph.D. candidate in nutrition and exercise physiology. “Can you get away with less? Sure, but you are limiting yourself by not optimizing your nutrition.”

Figure out what works for you. Experiment on long runs to figure out how many calories your body needs. “Ultra nutrition is like a balancing act: the amount that is just right for your body is often a very thin line between too much and too little,” says Bak. “When you aren’t feeling good, try to assess the situation to read what your body needs or doesn’t need to keep you going.”

In addition to quantity, pay attention to the types of food your body can handle. “I can’t do GUs or anything like it, so I stick with more whole foods like fruit, soup, avocado and nuts,” says Borst. Make sure you arrange to have those foods available on race day, so you don’t end up taking a risk on aid-station foods you haven’t tested in training.

5. Last but not Least

Keep it simple. “A crew, drop bag, pacer, et cetera, are nice, but so is just toeing the line without all the extras,” says Howe. “I like to have a crew when possible, but I keep it simple. They hand me a new bottle and a couple gels and I keep going. I have seen crews out there with suitcases full of gear [and] 99 percent of the time it’s not needed.”

Part 2 has even more tips for racing like an ultra veteran. Read it here!

Increasing Carb Intake Before And During Races May Improve Endurance Performance

Can Tech Help You Hack Your Nutrition—and Supercharge Running Performance?