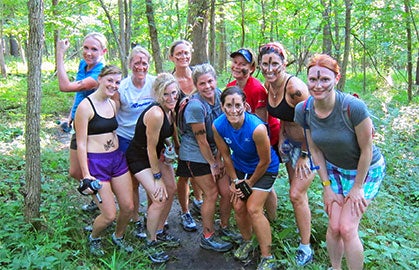 All is quiet in the mountainous forest 20 miles east of Seattle—when suddenly, a brigade of women clad in sparkly cocktail dresses, leopard-print tank tops and a hot-pink leotard burst through the trees. Chatter drowns out their footfalls on singletrack. It’s the annual High Heels Running Group’s (HHRG) Sexy Shirt Run, and the ladies are in full regalia.

A women’s trail-running group that runs together every Saturday, the HHRG has only been around for about two years, and boasts a membership of roughly 350. Group weekend getaways have included fastpacking in the beautiful, high-alpine basin of Washington’s Enchantments and renting a riverside cabin and hot tub for the annual Sunflower Trail Relay in the Methow Valley.

The HHRG is one among dozens of women’s trail-running groups worldwide that aim to provide a supportive space to shed insecurities, seek challenges, meet new friends and laugh a lot.

“The thing  that kept me  from joining coed groups was the fear of being left behind by faster runners,” says Megan Kogut, founder of HHRG. “We set expectations for a social pace.”

The women range in age from mid-20s to mid-60s and run everything from 5Ks to hundreds. Most juggle many responsibilities, so the group offers “a dependable venue to get exercise, nature and social time—triple the bang for their buck,” says Kogut.

On Saturday mornings halfway around the world, another group—WOOT, Women on Okinawan Trails—meets to share the trails. Mainly composed of American women who’ve come to Japan because of their husbands’ careers, WOOT offers what founder Anna Boom describes as “something fun with other women who experience the same feelings and challenges of life overseas.”

WOOT’s favorite trails include one near ruins of the Nakagusuku Castle, built around 1440, that often affords spectacular sunrise views over the Pacific Ocean, and one over the ancient Yamada stone bridge.

“Running over it,” says Boom, “I think of all the women who have crossed it before. Maybe it was where they came to gather fresh water and find out what was happening in each other’s lives—much like we do every week.”

In the Kansas City area, Sophia Wharton heads up the Monday Mud Babes, an offshoot of the Trail Nerds, focused on helping women excel as leaders while working toward their race goals.

“We turn Mondays into Fridays,” says Wharton. “My favorite part is hearing conversations bubbling along the trail with bouts of laughter.”

All the groups occasionally invite men to tag along. For the HHRG, it’s at their annual “Menvitational;” for WOOT, it’s their semi-regular FOOT (Family and Friends on Okinawa Trails) Runs, which Boom says are typically “less social;” the Mud Babes’ signature co-ed event is their Big Buck Night, in which male “Mud Babe groupies” are invited to don antlers and “chase the does.”

Back in the Pacific Northwest, Rachael Jamison, co-race director  at Guerilla Running, says she wanted to create the kind of group she wishes she’d had when she began running 20 years ago—“a noncompetitive place where the focus was on getting to know people, not just split times and races won.”

Her group, Run like a Grrrl, often sees upward of 50 runners at its Wednesday night runs in Olympia, Washington. The booming membership of around 1,300, says Jamison, is filled with enthusiastic women who credit the group with transforming their lives with positive messages of empowerment, community involvement and joy.

Says Jamison, “We say we are a running revolution, changing the world one runner at a time.”

“It took me at least a year to feel confident enough to join. I never thought I could keep up or actually run three miles. Now I crave Wednesday nights like I used to crave dessert. I just finished my first trail half-marathon!”
–Stefanie Ramsay-Werts of Run Like a Grrrl

“Ultrarunning encourages confidence and allows women to break the chains of perceived societal barriers. Some days I go to work and I think: ‘Man, it’s  a rough day, but I can do this because I ran 50 miles on Saturday. I’m tough. I can do this.'”
–Angel Mathis of HHRG

“So often it seems society at large likes to get women into the comparison game—who’s thinner, prettier, faster, more successful. At HHRG, we all hit the trail together, and, though we may run at different paces, no one runs alone.”
–Lisa Keith of HHRG

“Runners tend to be upbeat, so spending time with female running friends almost always results in rejuvenated spirits. Every WOOT member I’ve run with has a story to tell, and they’re stories that make me want to be a better person.”
–Jannine Myers of WOOT