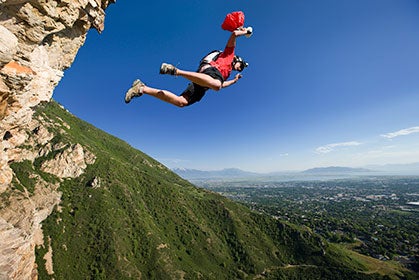 A new spin-off of the Skyrunner World Series will combine mountain running and speed climbing with a variety of other extreme activities, including BASE jumping off cliffs (pictured above). Photo: iStockPhoto.com.

LAUSANNE, Switzerland – At a raucous and slightly chaotic press conference held earlier today at International Olympic Committee headquarters, Kilian Jornet, a record-breaking mountain runner, and Ueli Steck, a world-class speed climber, announced that they have signed on to promote a series of races dubbed Extreme Sky. Organized by the International Skyrunning Federation, the events will merge ultra-distance mountain running with technical mountaineering and a variety of more offbeat activities, including parachuting from cliffs, also known as BASE jumping.

Using aerial photos on which proposed routes had been superimposed, the exuberant I.S.F. president Marino Giacometti breezily outlined the course for a trial race this August. “We start in Chamonix,” said Giacometti. “World capital of alpinism! From there, we run to the summit of Mont Blanc! Hard? Of course!”

Members of the press darted their eyes back and forth as they tried to keep pace with the course description, which included ascents of some of the region’s most technically demanding peaks, including the Petit Dru, a classic rock climb in the Alps with a reputation for frequent, dangerous rockfall.

Giacommetti had more. “Slacklining to the Brévent peak! Mountain bikes down a vertical kilometer to the village. Or paraglide. You choose!

A correspondent for a North American trail-running blog threw a pad of paper in the air and was the first to express consternation. “I’m lost. How are we supposed to cover this? Does anyone else understand this?”

“There will be no support stations,” Giacometti continued. “Instead … drones!” He then pulled back a curtain to reveal a hovering, lightweight drone with a small net full of supplies, including rehydration salts, energy bars and a block of Gruyère cheese.

Holding a remote control, Steck stepped forward to demonstrate how volunteers would pilot the support drone. The drone dipped, then swerved into Jornet, slicing the stunned mountain runner in his left thigh. “We are still perfecting the system,” apologized Giacometti, as he coolly handed the bewildered Jornet a handkerchief.

Unperturbed, Steck told the shocked audience that he and Jornet have been training together for the first Extreme Sky event, which will be run in pairs. “Kilian pulls me when we run. When we get to a climb, I haul him up,” explained Steck, demonstrating the technique by attaching a lightweight harness to Jornet’s compression shorts. Jornet winced, as blood oozed from his injury.

“The discipline requires technical skills, which we will teach!” Giacometti added, referring to pre-race training camps the I.S.F. will organize. “Technical climbing. Trail-running skills. Also, orienteering, fire-building, foraging …” His voice trailed off as he double-checked a long list taped to the podium. “Hunting. Fishing. Field surgery. And BASE jumping, too.”

A nervous Jornet was overheard whispering to Giacometti, “I thought we said no BASE jumping? I don’t want to BA—“

“Kilian will be an excellent BASE jumper,” Giacometti interrupted, heartily slapping the international champion on the back.

According to an I.S.F. press release, the entry requirements for Extreme Sky will be rigorous. Participants must undergo a screening for vertigo, and present a legally binding will during the application process. They must also carry rescue insurance, and submit to a videotaped waiver prior to the start of each race. The I.S.F. has already lined up a number of sponsors for Extreme Sky, including Squirrel Wingsuits, Winchester Rifles and, unsurprisingly, Red Bull.

Will Extreme Sky come to the U.S.? “We are analyzing some routes for 2017,” said Steck at the press conference, “but the number of lawyers in the United States presents a unique challenge.”

“The Grand Teton presents a beautiful route,” added Jornet. “I will provide snacks at the summit. No drones!” After a pause, he added, “And no BASE jumping, either.”

Doug Mayer is a Contributing Editor with Trail Runner and founder of Run the Alps, a trail-running tour company that will under no circumstances ever participate in the new I.S.F. Extreme Sky series. He lives in Randolph, New Hampshire.

This is a satirical April Fool’s Day article. The events depicted in this article, and the Extreme Sky race series, is fictional. Trail Runner in no way encourages its readers to BASE jump or perform surgery during trail runs.