A pacer can make or break your next ultra

I had my work cut out for me when the runner, Eva, I paced at last summer’s Western States 100-miler showed up … 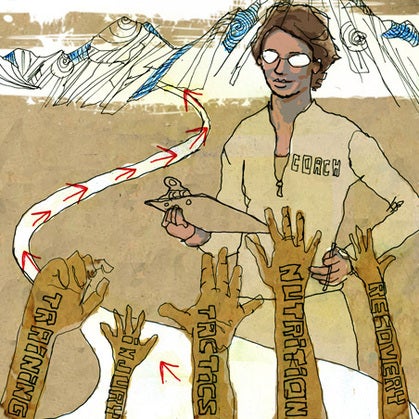 I had my work cut out for me when the runner, Eva, I paced at last summer’s Western States 100-miler showed up nearly an hour later than hoped at Mile 60, at Bath Road just before our planned rendezvous at Foresthill Aid Station.

“Therese! I knew you’d be here!” Eva chirped when she spotted me through the darkness at 9:30 p.m. Apparently she’d been sick, had taken a bad spill and hadn’t eaten in hours. My job now was to help her through another 40 miles and a very long night.

Pacing isn’t just a jolly jog. Pacers run alongside a racer for a section of an ultramarathon, usually in the second half, to keep the tiring runner safe and moving efficiently. A pacer is a mix of friend, motivator, shrink, coach, mother, nag and nurse. It’s complex work to help along an otherwise friendly ultrarunner buddy who can morph into a needy, cranky creature. But the satisfaction you earn will make every step worthwhile.

If you can’t pre-run the course to get acquainted with the terrain, distance between aid stations, river crossings and other obstacles, study topographic maps and trail guidebooks, talk to past finishers and review course descriptions. When approaching a slippery or difficult trail section, run ahead and scout out the best route. The course, as well as the runner’s time goals, health and state of mind, dictate how hard you should push the pace.

Be familiar with the race’s rules to avoid getting your runner disqualified. Know where on the course you are allowed to be with your runner, what you can do for them at aid stations and if “muling” (carrying his gear and food, which some races forbid) is permitted.

Do some long training runs together before the ultramarathon to observe your runner’s reactions to fatigue and pain and understand what motivates him. Don’t assume what motivates you will kick your runner into overdrive. Silence or stories? Being nice or being a bully? Running in front or behind him?

And just when you think you’ve got it figured out, things could flip 180 degrees and you’ll have to do the opposite of what you’d planned. At Western States, we overheard one pacer subjecting his runner, who was pale and in a death-march shuffle, to one bad joke after another … with no response.

I discovered at our first aid-station stop that my runner was a social butterfly who wasted precious minutes in her sleep-deprived state trying to say “hi” to everybody. From then on, about 10 minutes before arriving at an aid station, I planned our strategy, asking her what she would need and sometimes deciding for her. I’d then tell her what she would do for herself and what I would fetch for her. Consequently, we were able to move swiftly through the remaining aid stations.

To save more time, retrieve items from your runner’s pack as he walks instead of stopping. At aid stations, fill the runner’s bottle while he grabs a cup of soup and encourage the runner to leave the aid station as soon as possible, even if it’s only at a slow shuffle.

Know When to be Bossy

Late in a 100-mile race, when upset stomachs are common and low blood sugar impairs judgment, many runners don’t want to eat and may turn down sodium/electrolyte tablets and food. It’s your job to make your runner eat and drink even when he doesn’t want to. You may need to be domineering and become your runner’s decision-maker as fatigue inhibits his ability to properly look after himself. Inquire about water intake, when he last ate, or if a blister needs tending. Avoid open-ended questions like, “How do you feel?” and instead ask pointed ones such as, “Are you nauseated?” and “Should we stop and fix that shoelace?”

It Isn’t About You

Tuck your ego into your pocket because you are out there for the competing runner, but don’t neglect your own needs. Take care of your own hydration, fuel and foot care.

Understand that after hours of running together, seeing your runner through thick and thin (and possibly embarrassing moments, too) once you reach the finish line, you’ll be cast aside when he is engulfed in cheers, family and friends. Realize your runner is very grateful—and smile for a deed well-done.