Excerpts from features in our special April issue 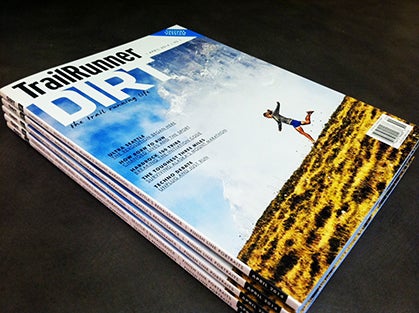 DIRT is here! A 108-page “coffee-table” edition printed on archival paper and jam-packed with stunning photos and in-depth stories, our special April issue is out on newsstands now. (All current subscribers should have received this issue as part of their Trail Runner subscription.)

DIRT hit newsstands on March 13, with a retail price of $9.95—just under half of what a regular one-year, eight-issue subscription to Trail Runner costs. It’s not too late to subscribe to receive DIRT as part of your subscription at no additional cost!

Want to get a taste for what’s inside our inaugural edition of DIRT? Read on for a few excerpts …

My Summer at Camp Hardrock
A Northwesterner wrangles her 1975 vintage motor home to Silverton, Colorado, to join the Hardrock 100’s eclectic tribe 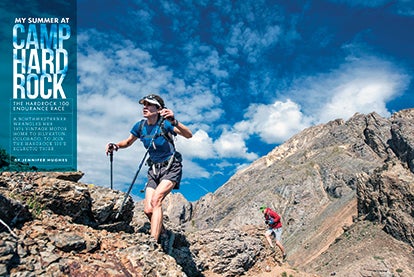 A week had passed since my first visit to the Avon Hotel and I knew it was time to try again. I took a deep breath and poked my head in, expecting the same uninterested reception as on my first attempt. But, this time, I found three shirtless guys, still sweaty and grinning from their afternoon adventure. Two were teenagers and talking to each other, while the eldest welcomed me with a hearty southern, “Hey, there!” and launched right into a recap of how fast and proficiently his sons had run the Kamm Traverse section of the Hardrock course in training for their upcoming pacing gig of Dad. His enthusiasm and fatherly pride were infectious, and I knew I’d found a friend at the Avon. We made our introductions and Billy Simpson, 58 from Memphis, invited me to chat on the porch upstairs.

Perched above town with a view of Anvil Mountain in the distance, the back deck is a haven, removed from worldly concerns, where time slows. Mismatched pop-up camp chairs were strewn about and we grabbed two, sank in and began to talk.

I discovered this year would be Billy’s eighth running of Hardrock. Each summer he comes out three weeks early, sleeping in his truck for 10 days before moving into the Avon.

“What is it about Hardrock?” I asked him. “What is it that gets in your blood and brings you back every year?”

“It’s the mountains, it’s the people, it’s the yin and yang of beauty and pain. After other races, it’s like going from Bud Light to heroin.”

I snorted with laughter.

“This race is old school, and [the organizers] are very careful to guard that,” he went on. “They don’t want this to become ‘Silverton Salomon.’ There are no helicopters here. These people show up in their Hokas and calf sleeves and the old guys say, this is not Leadville, this is our race. It’s the triathlonification of ultrarunning out there, but it ain’t gonna happen here. Silverton is just a dirt-road town. It’s not perfect but it’s pure and we come here to be free.” 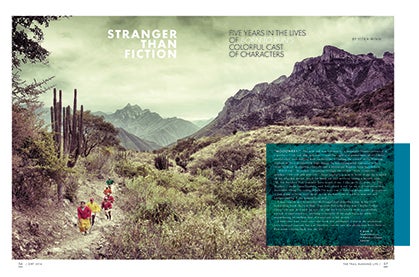 I’d been a frontline witness to the phenomenon, having worked in the footwear department of Seattle’s REI flagship store from mid-2009 to mid-2011. For several years, the store was the only local carrier of the Vibram Fivefingers, the minimalist shoes that Barefoot Ted was described as sometimes wearing in Born to Run. During those years, the words on every approaching customer’s tongue were, “Do you have those shoes with the toes?” followed by, “See, I read this book … ”

My job morphed from shoebox slinger to barefoot-running philosophizer, running-form advisor and in-house Born to Run expert. Everyone wanted to talk about the book. People would show up to the store, announce they’d chucked all their running shoes out the window, signed up for an ultramarathon and were ready to buy some Fivefingers, please.

Had it been McDougall’s intention to ignite the so-called “barefoot-running debate” that continues to rage five years later? Not really. His goal, he says, was simply to get people to consider the possibility that running could be enjoyable—and, in his case, losing the shoes helped him do that.

“Most of the time when you see running depicted,” he says, “it’s punishment. It’s this awful thing you have to do in order to accomplish something else. Yet I know the experience is the exact opposite—it’s fun—and there wasn’t anything out there that portrayed running that way.”

And who better to paint that picture than the oddball protagonists who found their way into the pages of Born to Run? In many ways, the characters seem like caricatures of themselves—in the words of the Denver Post, “so mind-blowing as to be the stuff of legend.”

Perhaps they were grounded in some truth, but it seemed to many readers they’d been exaggerated to their extremes, like political-cartoon renderings: the peaceful, corn-beer-chugging Tarahumara, the eccentric Barefoot Ted, the young party animals Jenn Shelton and Billy “Bonehead” Barnett, the humble ultrarunner phenom Scott Jurek and, of course, the mystical, larger-than-life figure of Caballo Blanco, a gringo runner who’d run away to the Copper Canyon to live and run free amongst the Tarahumara.

I couldn’t help but wonder, are they really all like that?

Through their involvement in the book Born to Run, these characters—who were, in fact, real people, and not really “characters” at all—had become instruments in a movement far bigger than themselves. I wanted to know, how did they feel about that? How had the book and its blockbuster success affected their lives? And, above all, I wanted to know …

Where are they now? 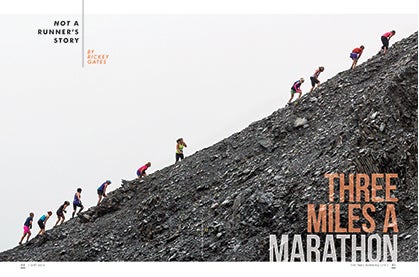 In the summer of 1981, as Bill Spencer was absorbing the weight of his record-setting performance, several thousand miles away, Patricia was nursing her third of five children—me—who would pass that yellowed photograph on the wall every day for the better part of two decades.

I grew up a proud son knowing that my mom had come in second in a running race once. It didn’t matter too much to me that she didn’t win or that there were only two women in the race. What mattered showed in the photograph—she had given it everything.

As my appreciation for running and racing grew from a dirt-track mile in middle school to golf-course cross-country in high school to trail and mountain races across the country and beyond, the race that had always existed as a black-and-white photograph began to take on more form.

In 2008 I had been racing my way around the Alps, chasing meager purses that would allow me to keep traveling. British fell runners, chasing the same purses, would inquire longingly about Mount Marathon.

Brad Precosky, otherwise known as the Downhill Demon, had once run the 3,000 vertical feet from the top of the mountain to the finish line in 10 minutes to capture a win. He and Barney Griffith worked tirelessly, raising money and designing a course to bring the world’s best mountain runners to Alaska for the World Mountain Running Championships that year.

And then there was Birdman—the zany alter-ego of Brian Stoecker, best known for his race-day attire of a leather skirt, feather headdress and a race bib fastened securely to his nipple rings. Written in large, bold type across his chest was his mantra: “FOR THE INDOMITABLE.”

Anne talked of them like distant cousins, separated by an ocean.

I would come to realize that Alaskan mountain runners and British fell runners are more similar than different. Both tribes possess pockets of great talent. Both have agreed that their immediate surroundings provide them with ample inspiration. And both have agreed that a brew pub is a great place to stretch after a run.

When I returned from Europe that fall, my minor obsession with Mount Marathon began.

A quick Internet search provided me with static-y news reels of men, women and children scratching their way up the mountain, sliding down snowfields and jumping off cliffs. I strained to watch a woman tumbling like a rag doll over boulders and small cliffs before springing straight back up, hardly missing a stride. Then I’d watch it again.

The Finish Line
Racer portraits after crossing the line 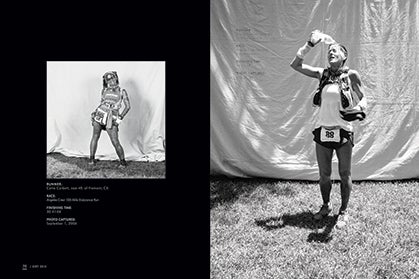