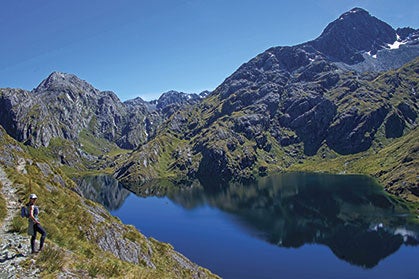 The most surprising thing about my first trail race in New Zealand, five years ago, was not the steep, lush, fern-filled mountainside or the barely navigable riverbed we followed.

What blew me away was the middle-of-the-pack competition. I knew this country produces world-class trail runners. But who were these unassuming, somewhat hefty older ladies politely shouldering past me? While I hopscotched laterally and lost momentum, they flowed over rocks and roots like water in a stream.

Some chirped to me, “That’s the way, brilliant!” When I hesitated, one said, “Yep, let’s have a go!”

I returned to New Zealand in February to run the Tarawera Ultra 100K and explore more of the country, but I had an ulterior motive: to discover and emulate whatever makes New Zealanders great trail runners.

I bought Hillary Cereal on our first day and studied Sir Edmund’s photo on the box. New Zealand’s number-one hero was a mountaineer.

“Get out and walk!” scream pamphlets distributed everywhere by New Zealand’s Department of Conservation. National parks cover nearly a 10th of the land, and the country celebrates tramping (hiking) and leverages it for tourism the way America glorifies the NFL. Surely the trail-running talent arises from this culture and environment.

Having traveled throughout New Zealand, I noticed how Kiwi parents expect their kids to feed the chooks (chickens), bring in laundry from the clothesline and go outside to play in spite of the crud (bad weather). They might spend a Saturday eating scroggin (trail mix) and bedding down in a trailside hut.

American parents like me, by contrast, tend to spend family time driving their kids to faraway sports fields to participate in supervised, competitive team games.

Two days after my arrival, the Tarawera Ultra tested my skills on a lakeside trail that cut through a dense forest of beech trees and crown ferns. Trunks and limbs, fuzzy with green moss, sprouted oversized mushroom caps like lips. Low-lying branches, tangled vines and rivulets of water dripping off boulders grazed my head. Dappled light filtering through the canopy cast shadows on roots that randomly and relentlessly intersected the trail, creating an obstacle course that tricked my eyes and feet.

I kept staring at the ground and trying not to trip, frustration building as more runners passed. Suddenly, with a thud muted by the loamy, damp soil, my face hit the ground and a twinge shot up from my ankle. I swore out loud.

Walking off the pain, I recognized the contrast between my overwrought mind and the peaceful forest. Perhaps this inability to navigate the trail had as much to do with attitude as upbringing.

A few days after the race, on the southern end of the country, I met another quintessentially rugged Kiwi trail runner. Mike Stone has started a business called Trackhopper that involves driving people’s cars from one end of a long trail (usually the 20-mile Routeburn Track) to the other, so the client has a car waiting at the end of the hike.

After Mike parks the car, he runs the trail home. He has run the Routeburn more than 150 times, and it takes him less than three and a half hours. Most trampers take at least nine.

I asked imploringly, “How do you run so well?”

The secret, he said, is to look up and ahead, and over time, the brain attunes to planting the feet. “As soon as you start looking down, you’ve lost it,” he said. “Let your feet do a dance. I never think about the consequences of a mistake.”

After Mike dropped my husband and me off at the trailhead, we tramped along, eyes up. Occasionally we broke into a jog that I tried to believe was a dance. We gazed at emerald treetops and aquamarine river water, swayed on swinging bridges, picnicked at a hut and studied reflections in an alpine lake.

I quit worrying about time, tripping or how well I was or wasn’t doing. I got better on the trails because I got out and played, the Kiwi way.