Highlights from the January Blog Symposium 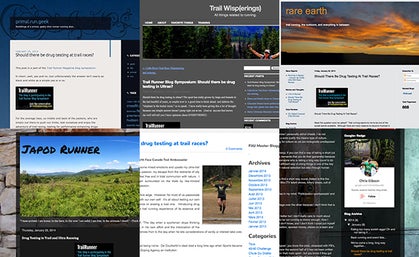 The January 2014 Trail Runner Blog Symposium topic was: Should there be drug testing at trail races?

Our Editors’ Choice, “Drug Testing at Trail Races—Maybe for Some,” by Jake Wyatt, takes a look at several aspects of the issue, from how and why cheaters cheat with to begin with, as well who should pay for drug tests at certain races.

Stay tuned to Inside Dirt for next month’s topic!

***Editors’ Choice
Testing comes with a financial cost, and I suspect that most race directors wouldn’t be able to bear this cost out of their own pockets or current budgets. Nor am I confident that we racers would be particularly happy if (as would likely be the case) those testing costs were tacked on to our entry fees. Furthermore, widespread drug testing would also come with a stigma and an admission of failure within the trail running community — namely the idea that testing needs to be done at all.
—Jacob Wyatt, Sometimes I Run

Trail running is not easy.  We do it in part because it is hard, because we are unsure of our own ability to complete something so monumental.  We put in lots of hours . . . lots.  Performance enhancing drugs, on the other hand, are a shortcut to excellence.  These two personality traits (dedication and apathy) are in conflict with one another.
—Gregg Lemkau, Rare Earth

Bottom line, there are a whole lot of people in this study who admitted to doping (probably more that didn’t admit it). 1 in 7 admitted to some form of illegal doping and those surveyed were not part of the pro-field; they were all recreational triathletes.
—Rachel Kelley, Trail Wisp(erings)

Maybe drug testing is part of a sport hitting the big time and gaining legitimacy in the wider eyes of the world. I just feel personally that when trail running reaches that stage a little bit of the soul of our sport will have been lost, and we may never get that back.
—Chris Gibson, You Ridiculous Man

It seems like almost every day there is a news story about an athlete that has failed a drug test. And we all jump in shock, and say “How could he/she? That is cheating?” We all want to believe that our athlete or our sport is immune, but the truth is, it is not.
—Emir Dedic, Japod Runner

No matter how you slice it, it’s a sad day when a grassroots sport such as trail running has to consider the implications of drug testing. Luckily for me I’m too slow to have to worry about it.
—Geoff Spakes, Primal Run Geek

If you’re hoping to recoup costs [of blood doping] by winning your next trail race, you’re going to be sad holding that $250 check, a box of energy drink in a flavor that no one likes, and a six pack of beer from the local brewery when you’re standing on the winner’s podium.
—Matt Thyer, Feet for Brains

Pierre De Courbertin said it well: “The day when a sportsman stops thinking above all else of the happiness in his own effort and the intoxication of the power and physical balance he derives from it, the day when he lets considerations of vanity or interest take over, on this day his ideal will die.”
—Eric Baudouy, Fitness United