Highlights from the May 2014 Trail Runner Blog Symposium 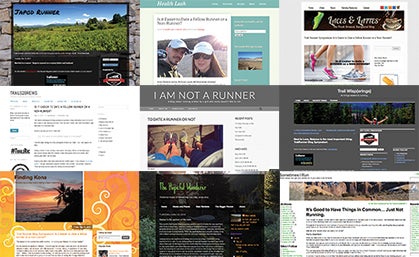 The May 2014 Trail Runner Blog Symposium topic of discussion was: Is it easier to date a non-runner or a fellow runner?

Here, you’ll find a few highlights from the entries we received this month. In our Editors’ Choice, “CrossFitter Meets Runner,” Sarahanne Blake of I Am Not a Runner shares her thoughts on why complementary passions are just as good, if not better, than identical ones.

Next month’s topic is: To be announced soon. See here for directions on how to participate.

***Editors’ Choice
In our case, it has less to do with what we do and more to do with us actually doing something.  The Boyfriend doesn’t love me because I run, he loves me because I made up my mind to do something and I keep doing it.
—Sarahanne Blake, I Am Not a Runner

I don’t think its strictly a question of dating a runner or a non runner, but being with someone who understands our drive, but also balances out our strong tendencies to get lost in our training.
—Rachel Kelley, Trail (Wisp)erings

Ultrarunning quickly forces us to accept that we’re not perfect and we’ll eventually see each other when we’re not at our best. Instead of taking away from the relationship though, this has only enhanced the love and compassion I feel for my wife.
—Drew Kelley, Guest Post on Trail (Wisp)erings

It doesn’t matter if they run or not. Instead what matters is if they are willing to support you as a runner.
—Doug Hay, Rock Creek Runner

Let me begin the conversation by saying that if you are a serious runner and you are dating a non-runner, it is important for them to be equally obsessed with something to balance out the equation, otherwise it will suddenly be all about your races, training and refueling.
—Jessica Kuepfer, Laces and Lattes

Bloggers Who Say It’s Easier to Date a Non-Runner

When you date a non-runner, they’re more likely to be genuinely impressed with your running accomplishments than another runner would.
—Jacob Wyatt, Sometimes I Run

Bloggers Who Say It’s Easier to Date a Fellow Runner

When you meet a person who just gets that aspect of your nature without having to really talk about it, it’s hard to resist wanting to be with them.
—Allisa Linfield, The Hopeful Wanderer

If my partner smoked cigarettes, played video games, and ate Doritos could she understand my passion for pushing my body to its physical limitations?
—Joe Granat, Health Lush

We’ve both had to compromise and move our long runs to Friday, Monday, super early in the morning, or later at night. While getting those runs in is important, having a happy environment trumps all that.
—Emir Dedic, Japod Runner

It’s priceless for me to walk into my house after a run and have Emir “just know” how I feel and also be exhilarated that I just completed a really long/tough training run instead of being annoyed that he had to take care of the kids by himself for hours.
—Amy Dedic, Running Marathon Mom

Life is an adventure, and adventures are meant to be shared. I don’t want to experience the world while the love of my life sits at home on the couch. That wouldn’t work for us.
—Eric Eagan, Trails2Brews

Personally, I find that dating a fellow fitness enthusiast and runner has just made it so much simpler for both of us to give and receive.  A non-runner would never agree to fartlek with me or let me rub my upper thighs with Vaseline in public! 😉
—Eric Baudouy, Fitness United

Without him I’d still be passionate about running, but it’s soooo much better to have someone to share it with, someone who gets it.
—Mary, Runner Chick/Finding Kona