How running can help fight depression and anxiety 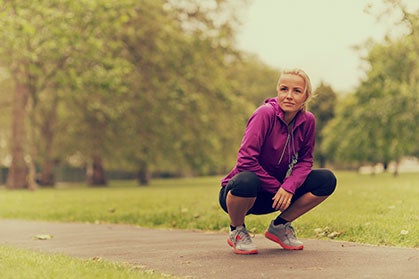 You’ve heard it before: “Running is my drug of choice.” Or, “I run to stay sane.” Most people who run, even if they took their first steps with visions of shapely thighs in mind, will tell you that they do it because it makes them feel good. Which begs the question: what exactly is going on in your brain when you run?

Brain imaging technology has shown that the neurochemical activity resulting from running is what gives us that famous “runner’s high.” For those who suffer from depressive disorders, this chemical activity is ordinarily sluggish. Could running, then, become a viable treatment option for depression or other mental-health disorders?

Happiness on a chemical level

Neurotransmitters, the chemical messengers that carry signals between neurons in the body, play a large role in the sense of pleasure a person derives from running and other activities. Dopamine, serotonin and norepinephrine are a few of the feel-good chemicals that, when fitted neatly into a receptor site on a receiving neuron, trigger the experience of pleasure.

The discovery that low levels of certain neurotransmitters—namely serotonin and norepinephrine—are often seen in depressed individuals led to the creation of a class of anti-depressants known as SSRIs, or Selective Serotonin Reuptake Inhibitors.  These drugs delay the “reuptake,” or absorption, of serotonin into the system, leaving more available to bind to neurons and thereby improve one’s mood.

Similar, and potentially longer-lasting, changes in the dopamine and serotonin systems occur in the brain after exercise. For most of us, those changes are part of the reason something that upsets us before a run just doesn’t seem so important after. For a depressed person, the effects are more profound. A March 2006 article in the Journal of Psychiatry & Neuroscience found evidence that while major depressive disorder is linked to a decrease in neurotransmitter production, exercise actually promotes the growth of tryptophan, one of the building blocks of serotonin.

“Exercise can create a more responsive and balanced system,” says Kirk Erickson, a professor of psychology at the University of Pittsburg. In other words, a physician must assess which class of anti-depressant to prescribe based on whether a client’s symptoms are more consistent with a lack of serotonin or norepinephrine. Exercise, by contrast, affects the entire body, and creates a cascade of feel-good effects, such as decreased stress hormones and increased body temperature—which can lead to feelings of relaxation and reduced muscle tension—as well as increased neurotransmitters.

For some people, it’s possible that running, or a combination of running and treatment, may be just what the doctor ordered. Researchers in a 1999 study in the Archives of Internal Medicine assigned 156 moderately depressed men and women to one of three groups. One group exercised, another took SSRI medication and the third exercised and took the medication. While medication took less time to reduce the symptoms of depression than did exercise, after 16 weeks there were no significant differences between the treatment groups.  Further, at a 10-month follow-up, members of the exercise-only group had significantly lower rates of depression than those who had just taken medication or taken medication in combination with exercise.

A similar study in 2004 compared running and psychotherapy. For 10 weeks, participants were randomly assigned to run for 20 minutes three times a week, attend one 60-minute therapy session every week or do both. All three groups displayed a significant reduction in depression, with no meaningful differences between them, and positive benefits were still present at a four-month follow-up.

It doesn’t stop after one long run

The initial sense of relief that a depressed person feels after exercising may come from heightened neurochemical activity, but a continued commitment to getting out and moving around can have lifelong effects. As the body gets better, so does the brain.

“Exercise influences fatigue, sleep, well-being, cognitive function, strength, gait and balance,” says Erickson. “We also know that exercise alters inflammatory and immune responses, growth and trophic factors and insulin pathways. It’s likely that a combination of all of these changes are what’s contributing to improvements in mood.”

Exercise, of course, offers preventative effects, as poor physical health can often lead to feelings of depression. “A failure to exercise regularly has a significant bearing on the odds of suffering encounters with insidious, lurking villains that we would all prefer to avoid: cardiovascular disease, cancer, strokes, diabetes, to name a few,” the clinical psychologist Keith Johnsgard writes in Conquering Depression and Anxiety through Exercise. “Those villains profoundly affect our mental health.”

As a runner, you already know: it’s hard to stay down while on the trail. For people struggling with depression, anxiety and other mental-health disorders, the benefits to the mind and body alike can be life changing.

>Exercise every day. Even with 15 minutes of exercise, your brain will get a much-needed boost of healthy neurochemical activity. If you can’t run, walk. Any physical activity helps. The same goes if you’re stuck indoors; squats, jumping jacks or even gentle stretching will jump start your neurotransmitters.

>Eat and hydrate well. Poor nutrition or hydration can lead to a negative feedback loop that makes you less likely to run and, in turn, more likely to feel anxious or depressed.

Betsy Welch is a RN who routinely prescribes exercise to her clients. Her own mental-health diet consists of road trips, locally sourced food and many miles on scenic Colorado singletrack.

How Going for a Run May Improve Your Response to Vaccines

What is Runner’s Dystonia?