Six weeks before the Chicago Marathon, 2012 Olympic Marathon Trials hopeful Benjamin Gailey ran the mountainous, 170-mile Colorado Relay. “The idea was to give me easy downhill relay legs, since I would be running the Chicago Marathon in six weeks,” he says. “My first leg started at 11,200 feet and dropped 1900 feet in 6.8 miles. I ran the first four miles in 18:55. I knew I was cruising, but had no idea gravity was pulling me down that quickly. Warming up for my next leg—nine miles with an 1800-foot descent—was quite painful. My last leg was five miles that dropped ‘only’ 600 feet. After the race, I took a nap in the rental van for two hours. When I awoke and put one leg out of the van, I nearly fell to the ground. I couldn’t even walk. Needless to say, I didn’t do well at Chicago that year.” 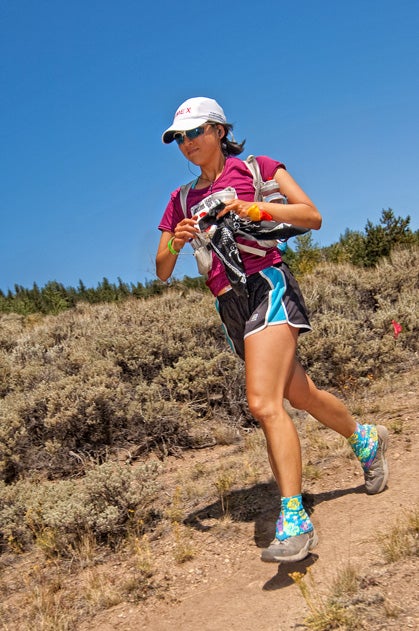 Caroline Soong puts her downhill training to the test during the 2009 Leadville Trail 100-miler, Colorado. Photo by Rob O’Dea.

This article appeared in our 2010 Race Issue.

If you’ve ever run a race with long or steep downhills—i.e. most trail races—you know how downhill running can destroy your legs. The key to success is training specifically for those quad-burning sections.

Even though uphill running feels harder, downhills cause bigger problems due to the repeated gravity-induced eccentric muscle contractions, during which your muscle fibers are forced to lengthen, causing them to tear. The muscle damage decreases your muscles’ ability to produce force, which slows your pace on the flat and uphill portions of the race and leads to delayed-onset muscle soreness (DOMS), which includes an inflammatory response and lasts for a few days as your muscle fibers heal.

Downhill running also affects running economy, the amount of oxygen you consume to maintain a given pace. A number of studies have shown a significant decrease in running economy for up to one week following a 30-minute downhill run on a 10- to 15-percent grade.

On the upside, damaging muscle fibers with eccentric contractions makes them stronger, protecting them from future damage. A 1985 study published in the Journal of Applied Physiology found that just a single 30-minute run downhill at 10-percent grade had a prophylactic effect on muscle damage and soreness for up to six weeks. Therefore, while you can expect your muscles to be sore after the first time running downhill, subsequent downhill workouts will cause less soreness.

Add downhills to your training a little at a time. Start with a short, gradual slope of about two- to three-percent grade, and progress to steeper and longer descents. Treat downhill workouts as hard sessions, and recover well before your next hard workout. Time has the greatest effect on healing your muscle fibers from downhill eccentric contractions, so back off hills in the final few weeks before a race.

When downhill training, pay attention to your mechanics, since it’s easy to overstride. Instead of focusing on reaching forward for a longer stride—which already happens from the pull of gravity—emphasize a quicker leg turnover, which will keep your momentum going forward. Since downhill running is faster, you won’t have as much time to decide where to place your feet, so look farther ahead.

Avoiding trashed quads during races with long and/or steep downhills requires a keen sense of pace, confidence to stick to your plan when others have taken the pace out too fast and a good dose of self-restraint. Ideally, you want to feel the same when racing downhill as when you’re on flat ground.

Momentum, however, will make your goal pace feel easier. Take the case of Nicole Prause, Ph.D., during her winning run of  2007 Pocatello Marathon in Idaho, which drops 1500 feet in the first 14 miles. “I had a goal pace in mind and a GPS for feedback every quarter mile. I found it extremely difficult to make adjustments to maintain an even pace,” she says. “One quarter was too fast and, although I tried to slow down, the next quarter would have a steeper drop. What felt hard was far under my planned split, and what felt easy was still under split. The downhill needs must be considered in setting your goal pace.”

The best downhill-running skill to develop during training is the ability to run at different exertion levels. For example, learn to simulate 10K race-pace intensity, rather than 10K pace, while running downhill. While your pace will be faster than 10K pace, you’ll develop the awareness and control to differentiate between different paces for different downhill environments.

If you train smart for downhills, you’ll be able to charge up the other side of the hills while your competitors are laboring from the downhill damage.

Dr. Jason R. Karp is owner of RunCoachJason.com, a coaching, personal training, and fitness consulting company. He holds a Ph.D. in exercise physiology, and is director and coach of REVO2LT Running Team, a freelance writer, and competitive runner. Subscribe to his free e-mail newsletter at www.runcoachjason.com/newsletter.