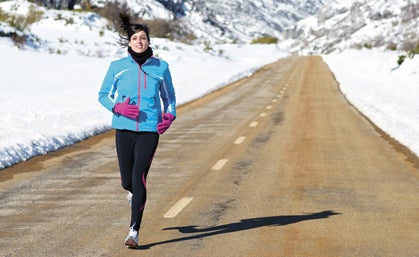 It was somewhere around January, in the dead of winter, when the realization took hold—I was confined to the pavement.

It’s not that my hometown of Minneapolis lacks nearby trail access—quite the opposite. But a flash freeze had turned much of the Twin Cities’ singletrack into icy death chutes. Some hardcore trail junkies toughed it out with screws in their shoes, but faced with limited daylight and a schedule that included grad school and two jobs, I gave into the convenience of the flat, paved trails that start just blocks from my doorstep. Quickly, though, I became bored.

To mix things up, I revisited a ghost from my past: speed work. Fartleks, intervals and tempo runs became a twice-or-thrice weekly undertaking. Soon I was running faster than I had since college, and entering (cold) road races with newfound confidence. When the snow melted and I stepped back onto the trails, I still dedicated two days a week to a tempo effort on the pavement adjacent to the Mississippi River, or a 1000s session on the University of Minnesota track.

After a brief readjustment to the varying tempo and more challenging terrain, I was running trails better than ever before—all because I spent the winter running on roads.

A Simple Matter of Improving Fitness

My confinement to pavement was a blessing in disguise, but it doesn’t take an accident to rejuvenate your trail running. If you are trying to be competitive or set a PR, consider dedicating a training segment to the roads—or simply adding a couple of speed-oriented workouts each week.

Glenn Randall, a member of the 2013 U.S. Mountain Running Team, regularly trains for serious efforts on the roads: He ran a 2:20:56 at the 2013 Boston Marathon and a 1:07:33 at the U.S. Half Marathon Championships in June. The Tempe, Arizona, resident (recently relocated from Colorado) says training variety helps his performances on every surface.

“Doing the same exact training all the time isn’t the best,” says Randall. He adds that road races build strength and leg speed that translate well to running in the mountains.

Chris Lundstrom, a 2:17 marathoner, has leveraged his road-running know-how to build a stellar trail resumé: he placed third in the 2009 North Face Endurance Challenge 50 Mile in San Francisco, and fourth in the 2012 American River 50 Mile in Sacramento. “Everyone can benefit from speed or interval work regardless of what distance and terrain they intend to race on. It’s a simple matter of improving your fitness,” says the Minneapolis-based, USATF-certified coach, who helped me design my winter running plan. “If you can do a long race at 70 percent of your VO2max, you will be able to do it considerably faster if you improve your VO2max through training. Short, fast intervals are a good way to improve your muscular strength, [which] becomes really important the longer the race is.”

If you do decide to pursue speed workouts, proceed carefully. Both Randall and Lundstrom note that harder, strength- and speed-focused efforts should only come after a period of base building. Forcing the body to adjust simultaneously to both higher mileage and higher intensity increases the risk of injury.

Randall’s workouts vary depending on the race he is training for. Whereas road-racing season brings intervals on the track and long runs on the road, his “trail-season” workouts consist of hill repeats (up and down), fartleks on a gradual uphill and long trail runs.

“I subscribe to the philosophy that long, slow distance leads to long, slow races,” he continues. “Running on roads and getting in that kind of speed puts something special in your legs.”

Read on for sample workouts to keep your speed up in the winter.

Lundstrom suggests different workouts for different race distances. Aerobic strength and lactate threshold are key for ultras, while shorter trail races require a tolerance for sustained, high-intensity running. He also notes that workouts of varying intensities work different muscle groups, potentially aiding in recovery and allowing you to squeeze in more workouts. However, he reminds, “It’s important not to ignore fatigue. You still need recovery days and time off after hard efforts.”

Short speed session
Useful for: Races of any distance. Spinning your wheels can be a primer for a long training period, or provide a final tune-up before a short race that will require quick leg turnover.

How it helps: Running fast forces your neuromuscular system to fire at its peak and shore up any inefficiencies; in other words, you’ll improve your running economy and form.

3-4 miles of total effort, below 5K pace
Useful for: Short trail races, up to half marathon or 25K

How it helps: A fast trail race hurts. Building a tolerance for sustained, intense efforts makes the pain more bearable and helps you stay in mental control of your race.

How to do it: 6-8 x 800 meters at 5K pace or faster with two to three minutes of recovery. “Start a training phase on a track, road or other relatively flat surface,” Lundstrom says, “and then over the last few weeks shift the workouts to trails that are similar to those you will be racing on.”

How it helps: Improves lactate threshold and aerobic strength. “This workout is long enough that you have to get somewhat comfortable at this faster pace, which means that running slower will feel quite easy,” says Lundstrom.

How to do it: 4 x 2-mile repeats with two to three minutes of recovery in between.

How to Master the Long Run