And why you should, too 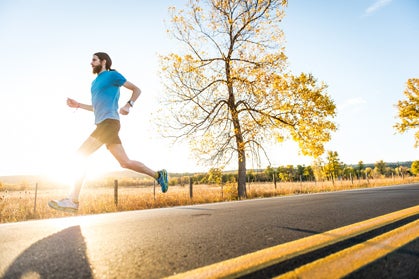 Mike Wardian has run six road marathons already in 2015, but hasn’t slowed on the trails. Photo by Matt Trappe

Max King, Sage Canaday and Mike Wardian are all top trail runners. So it was a little surprising to see them making headlines in early 2015 for feats on the road or treadmill.

The fact that elite runners can run a fast marathon is not terribly newsworthy, but all three of them seem to have done so without sacrificing their proven prowess on trails. Only months prior, in December, Canaday won the stacked North Face 50 Mile in San Francisco, and Wardian and King finished eighth and ninth, respectively, at April’s competitive Lake Sonoma 50 Mile.

Why do athletes like King, Canaday and Wardian train and race on a variety of surfaces, over a variety of distances? How do they succeed at both? In their answers lies a litany of useful information for the rest of us who aren’t necessarily aiming to win a road marathon or trail ultra this year, but who want to run decently at both.

King says your body and mind will tire of anything if you do it all the time. Not even trail running, with its varied terrain and ever-changing scenery, is an exception.

“I switch surfaces because it keeps everything fresh,” he says. “I can stay more motivated to train hard if I have a different type of race coming up.” While he typically prefers running on trails, he adds, “I really enjoy running fast, and that’s easier done on the roads.”

King also credits road running as an important component of his training for trail races. “You can work on pure turnover and efficiency,” he says, which come into play during trail races but are “not something you can work on very well just running trails.”

To Wardian, alternating between trails and roads makes him a stronger runner on both. “When I switch surfaces, I bring strength and mental clarity and focus from the trails to the roads,” he says. “When I switch from roads to trails, I can bring leg speed, turnover and pacing to the trails.”

Maximize your performance on every surface

You don’t have to be an elite-caliber athlete to reap the benefits of multi-surface running. Here’s some advice from the pros on how to switch quickly between road and trail.

You’ll run at least decently on any surface or terrain if you’re in good shape. “In general, having a high aerobic mileage base and general strength goes a long way,” says Canaday.

So run a lot, and a lot of hills. Long, gradual, strength-building hills will serve you well, whether or not your upcoming race has a lot of climbing.

Don’t expect to set a road half-marathon PR one month and be in peak condition for a trail 50-miler the next. “You can’t be 100-percent fit for all types of mountain-ultra-trail and road events all at the same time,” Canaday says. “Something has to give.”

He admits that even his standout performances on trails and roads are compromised a bit when he attempts to train for a diverse array of races. “In an ideal training environment,” he says, “one has focused on course-specific workouts for several weeks or months at a time.”

This doesn’t mean you should ditch a road race you’re looking forward to if it’s followed by a goal trail race. Just be aware that, to race your best, you will likely have to prioritize one or the other in your training.

3. Run fast, even if you’re training for an ultra.

Even if your focus is a trail race, working out on the road can be a beneficial addition to your training.

“Use the road or track for your speed work and efficiency work, like threshold runs,” King says. “That’s going to train specific physiology you’ll need during any race,” on any surface.

Similarly, says King, the strength and agility gleaned from climbing and descending on technical trails pays dividends on the road. “Learning how to climb hills easily during your trail runs will pay huge benefits at the end of a road marathon when your body is starting to give out,” he says.

Here are a few types of road workouts to incorporate into your trail-running routine. Be sure to properly warm up and cool down before and after each.

>VO2-max intervals. These are done at around 5K race pace (or at least 5K race effort, since you won’t be in peak 5K shape all of the time). Expect them to hurt. VO2-max intervals increase your pain tolerance, give you huge fitness gains relative to the distance covered and make you a more efficient runner.

>Tempo runs and cruise intervals. These are run “comfortably hard,” at the pace you can sustain for about one hour—for most runners, this means close to 10K race pace. Running at this pace increases your lactate threshold (the exercise intensity at which lactic acid pools in your blood, bringing on fatigue and pain) and helps you stay strong late in a race. Because lactate-threshold pace is faster than marathon or ultra race pace, tempo runs can also help longer races feel more comfortable.

>Hills. Sometimes called “speedwork in disguise,” hill work pushes your body’s systems much like an interval session would, but at lower speed and impact. Running hills will make you a stronger racer, even on flats or downhills.

>Short sprints and strides. It might seem unnecessary, if you’re training for a 50- or 100-miler, to run 200 meters all-out. But short sprints will shore up your neuromuscular inefficiencies, turning you into a smoother, more efficient runner, no matter the pace or distance.

How to Master the Long Run

Everything You Need To Know About Tempo Runs