When you’re racing long, how far should you run in training? 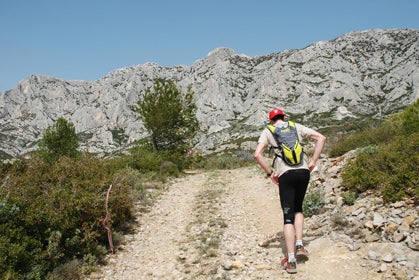 The weekly long run is a staple of any good training plan. Marathoners typically work up to a run of 20 or more miles in preparation for the distance, and even middle-distance track stars regularly put in double-digit miles.

But when the distances you’re training for are unprecedented for your body – 50K, 50 miles, 100K or even 100 miles – how far, exactly, should your longest runs be?

The marathon model of very nearly approaching your race distance – running a 90-mile long run in preparation for a 100-miler, for instance – will more likely break your body down than make it stronger and prepared to run farther. Here’s how to you train your body for the battle ahead without completely wasting yourself before race day.

Long runs increase endurance and build capillaries – the small blood vessels surrounding your cells – which allows more oxygen to be delivered to your muscles. Perhaps most importantly, they build the mental fortitude to push through, or even avoid, low points.

There is no fool-proof formula for long runs, and they need to be tailored to individual athletes, says Christopher Lundstrom, 39, of Minneapolis, Minnesota, a USA Track & Field-certified coach with PRs of 3:23 in the 50K, 6:48 in the 50-mile and 2:17 in the marathon. “How you respond to longer runs on specific terrain is going to determine how much you can and should do.

“Some runners are going to feel pretty worn out from a four-hour run,” he continues, “while others might feel great two days later as long as they don’t push the pace too much. The key is to time the long runs in order to continue to gain fitness, rather than to continually overload and actually become worn out – overtrained, injured, or just plain sick of running.”

All of that, he says, makes a difference in determining how frequent and far your long runs should be.

The 50K distance can be approached like a marathon – it’s only about five miles longer – and Lundstrom says runners aiming to be competitive can do a couple of long runs approaching the 50K/31-mile distance. Otherwise, he says, “having done 23 to 25 miles on trails is enough, especially for someone who has done some road marathons and has a few years of running under their belt.”

He suggests breaking your longest runs into progression-type efforts: “The run is divided into quarters and the first part is nice and relaxed, the second part is just a touch quicker, the third part is a moderate effort and the final part of the run is moderately hard, the effort you expect to feel toward the end of the 50K.”

If you’re not a 50K rookie, you may be able to get away with even less. “If you raced another 50K two or three months ago, you probably don’t need to worry about trying to replicate that in training as you have the physiological and mental benefit of having done the same distance very recently,” Lundstrom says. “Oftentimes, I would do my first 50K of the year on no more than a 22-mile long run. But maybe I ran a 50-mile and a few 50Ks the previous year, plus a road marathon, so the idea of covering the distance was not a big concern.”

Lundstrom says that for these longer distances, a long run of 33 to 35 miles might be necessary, but that going much longer than that – say 40 miles or more – risks a long recovery period and yields only minimal additional benefits. He adds that the primary benefits of longer runs at this stage are mental.

“You want to get to the point where you feel like you’ve been out there a long time, and maybe you’ve started to bonk or gotten dehydrated and had to slow and assess what you’re doing,” he says. “For the mental component, I think it’s important to do something a bit longer than 50K, and to do it either on your own or with a training partner or two. The race environment of a 50K is almost too encouraging to really prepare you for some of the potential challenges of the longer distances.”

The longer the distance, the more challenging it is to prescribe an ideal maximum long run. Lundstrom is quick to add that while he has coached and observed the 100-mile distance, he has not run one himself.

Mostly, he notes, runners should emphasize being healthy when they arrive at the starting line. The razor’s edge between peak fitness and injury or illness can be walked in shorter races, but any weaknesses, injuries or other issues are going to be exposed over the course of 100 miles.

“I think it becomes a question of experience and psychology more than physiology,” he says of 100-milers. “Maybe [do] a 50-mile event as a training run, provided you can do it without pushing yourself too hard, and that it is far enough out from the 100-mile that you will be well recovered.

“But if you’ve done several 100-mile races, you probably don’t need to go out and run 100K in order to prepare for the next one,” he adds. “Thirty-five or 40 miles will give your body a reminder of what it’s like to be out there for an extended period of time.”

Additionally, Lundstrom says, if a particular 100-miler has some noteworthy environmental or topographical challenges such as heat or big climbs, you might be better off emphasizing those factors in your training than fretting over mileage.

Ultrarunners have long incorporated into their race prep the back-to-back long run (two long runs in two days), which allows for training on tired legs without all of the risk of injury or burnout from a single mega-mileage day.

“The idea of back-to-back days, or even heavy blocks of three to five days of high mileage, followed by recovery periods of little to no running, can also provide many physiological and mental benefits, provided that the rest periods are sufficient to restore health,” he says. “I suspect that many people do too much too close to race day, and start out feeling less than 100 percent.”