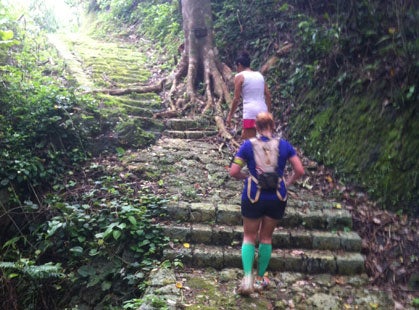 Last weekend our running group, WOOT (Women on Okinawan Trails) met for our Saturday morning trail run. Joining us were three ladies completely new to trail running. I always take it for granted that runners new to the trails will love running them just as much as we do, and as such I often neglect to tell them that experiences on the trails sometimes require a bit of grit and fortitude. Such was the case last weekend.

Starting out from an empty parking lot, we headed south on a busy main road, just a few hundred meters before making our turn towards the trail entrance. The trails were slick from previous days of rain and it wasn’t too long before I demonstrated how to do a butt-slide with quick standup-recovery.

Heading on upwards, the terrain was rather technical, with jagged rocks jutting out and slick, slimy green moss to contend with. At one point, we ran over a short ridgeline so narrow that a slip of the foot would have meant a dangerous slide down one of the slopes on either side.

But onward and upward we went, slowly, carefully, and as always, doing what we do best—chatting and laughing. At the time, it didn’t occur to me that some of the new ladies might not be having as much fun as the rest of us were.

Another mile or so of climbing and we made it to the top. A lookout point stands atop the summit, treating visitors to a spectacular view of the East China Sea to the west and the Pacific Ocean to the east. For a few minutes we stood around admiring the view, and then, not wanting to miss the opportunity for a group shot, we smiled and posed for the camera. 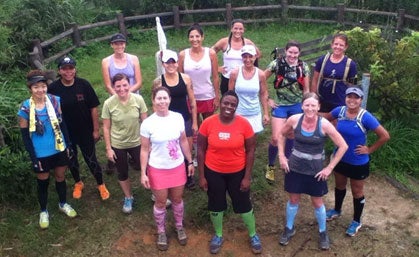 All smiles aside though, some of our ladies must have disturbed a wasp nest, because four of them had been stung, including two of the new runners—one on the back of the head and one on the lips. Jokingly, I told her that she not only got to go trail running for free, but she also got a free “collagen shot”—a workout and beauty treatment all in one.

While we laugh about initiating our new ladies with tough trail runs (and they laugh with us too, after the fact), I wonder if a kinder way to introduce them to trail running would be to invite them first on much easier runs. Am I wrong to assume that runners new to the trails will enjoy running them as much as we do?

To alleviate my concerns, I later sent personal messages to each of the new ladies, asking for honest feedback, fully expecting to hear reservations about returning to the trails.

Instead, here were some of the comments I received:

In their responses, each hinted at a common desire—something a little more fun and adventurous than pavement running. While I accept that not everyone is going to immediately fall in love with the trails, I am going to believe that probably the majority will.

If these three ladies are representative of the type of first-time trail runners we can expect to see turning up on Saturday mornings, then I suspect I should probably only worry if our runs are not tough enough!

Jannine Myers lives in Okinawa, Japan, where she works as a running coach, weight management consultant and freelance writer. She blogs at www.gotheextramilewithwoot.blogspot.com.