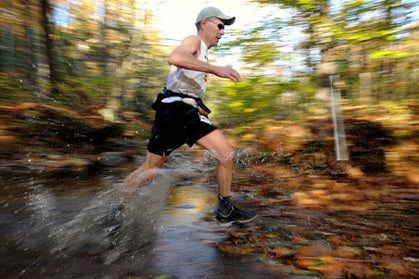 From the time the ancient Greek runner Pheidippides ran from Marathon to Athens to announce the Greeks’ victory over Persia in the Battle of Marathon, humans have been fascinated by endurance. And today’s trail runners have hundreds of race options in which to test their mettle, e.g. the Wissahickon Trail Classic 10K in Philadelphia, Pennsylvania, the Tecumseh Trail Marathon in Bloomington, Indiana, and the Western States 100-Mile Endurance Run in Northern California. The key to racing well is knowing how to train the three main factors affecting endurance performance — VO2max (aerobic power), lactate threshold, and running economy — for your chosen race distance, from 10K to ultramarathon.

VO2max is the maximum volume of oxygen that your muscles can consume per minute. To be a good distance runner, you need a high VO2max. Think of VO2max as your VIP card—a high VO2max alone gains you access into the club. But having that VIP card is not enough. To be a great runner, you need to have other tools in your physiological arsenal.

One of those other tools is the lactate threshold (LT). The LT demarcates the transition between running that is almost purely aerobic and running that includes significant anaerobic metabolism. (All running speeds have an anaerobic contribution, although when running slower than LT pace, that contribution is negligible.) Thus, LT is an important determinant of endurance performance since it represents the fastest speed you can sustain aerobically without a significant anaerobic contribution. Research has shown that LT is the best physiological predictor of distance-running performance.

A third tool is running economy, the volume of oxygen (VO2) used to maintain a given speed. The less oxygen you use to run at a specific speed, the better. For example, if two runners have the same VO2max, but Runner A uses 70 percent and Runner B uses 80 percent of that VO2max while running at eight-minute mile pace, the pace feels easier for Runner A because he is more economical. Therefore, Runner A can run at a faster pace longer before feeling the same amount of fatigue as Runner B. Running economy is influenced by biomechanics, the proportion of slow-twitch muscle fibers, body weight and the density of mitochondria, microscopic structures responsible for aerobic metabolism.

In a marathon, the main difference from shorter races is that you run out of carbohydrate, which is your muscles’ preferred fuel. You have enough stored carbohydrate (glycogen) in your muscles to last slightly more than two hours of sustained running at a moderate intensity. So, unless you plan on running the marathon as fast as Haile Gebrselassie, you’re going to run out of fuel. Glycogen depletion and the accompanying low blood sugar (hypoglycemia) coincide with hitting the infamous wall.

Other issues not encountered in shorter races that affect marathon performance include dehydration, muscle-fiber damage, increased body temperature (hyperthermia) and psychological fatigue. When you sweat a lot, you become dehydrated, which causes a decrease in the plasma volume of the blood, decreasing the heart’s stroke volume and cardiac output. Oxygen flow to your muscles is then compromised, and the pace slows.

The relentless pounding causes muscle-fiber damage, which decreases muscle-force production. Since your muscles produce heat when they contract, running for long periods of time increases body temperature and the resulting hyperthermia decreases blood flow to the active muscles since more blood is directed to the skin to increase convective cooling. Finally, running for so long can cause psychological fatigue, the latter of which is due to changes in the levels of brain neurotransmitters.

While high mileage is important for the 10K, it is especially important for the marathon to maximize your aerobic capacity. This may even require running twice per day to spread out the stress and maximize recovery. In addition, research has shown that runners who perform high volumes of endurance training tend to be more economical, which has led to the suggestion among scientists that running high mileage (greater than 70 miles per week) improves running economy.

Running’s repetitive movements result in improved biomechanics and muscle-fiber recruitment. Additionally, economy may be improved by the weight loss that usually accompanies high mileage (a lighter body needs less oxygen than a heavier body); the growth of slow-twitch skeletal muscle fibers; and the greater ability of tendons to store and use elastic energy with each step.

The main difference between 10K training and marathon training is the inclusion of long runs in your program, with the amount of time spent on your feet being more important than the number of miles you cover. Repeatedly running for more than two hours presents a threat to the muscles’ survival by depleting their store of glycogen. However, the human body responds rather elegantly to situations that threaten or deplete its fuel supply: It synthesizes and stores more than what was previously present, thus increasing endurance for future efforts. Empty a full glass, and you get a refilled larger glass in its place. Much like college fraternity parties. The more glycogen you have packed into your muscles, the greater your ability to hold your marathon pace to the finish.

If you’re training for a trail marathon, do most of your long runs on trails so you get used to the uneven terrain, and run in trail-running shoes. While your long run should not comprise more than about 30 percent of your weekly mileage, this rule can be broken if you are only able to run a few times per week. Run at a comfortable, conversational pace (about two minutes per mile slower than 5K race pace, or about 70 to 75 percent of maximum heart rate). Lengthen your long run by one mile each week for three or four weeks before backing off for a recovery week.

If you run more than about 40 miles per week, or if you run faster than about eight-minute mile pace, you can add two miles at a time to your long run. Keep adding miles until you reach 22 to 24 (or about 3 to 3 ½ hours, whichever comes first), and do your longest run two to three weeks before your marathon.

LT runs are also very important when preparing for the marathon. The longer the race you’re training for, the more important it is to train your LT, because the closer the race pace will be to your LT pace and the more important it becomes to hold a hard pace for an extended time. And for a marathon, you need to extend the duration of your LT runs. To accommodate the increased duration, you can run a bit slower than LT pace (which I call tempo runs). Since optimal marathon pace is only about 15 to 20 seconds per mile slower than LT pace (with the difference in paces getting larger as performance level declines), the goal of marathon training is to raise your LT and to increase your ability to sustain as high of a percentage of your LT as possible.

If you’re experienced with doing many long runs and want to give your marathon performance a boost, try inserting LT-paced running into some medium-long runs (12 to 16 miles). These LT/LSD (long slow distance) combo runs simulate the physiological and psychological fatigue of the marathon. Like long runs, they severely lower muscle glycogen, stimulating its synthesis and storage. You can include LT segments at the beginning, middle and/or end of the run.

After you’ve done a number of these combo runs, try running faster than LT pace for the last mile or two of the final LT segment, which will sharpen you for the marathon. For example, run 9 miles easy + 4 miles at LT pace + 1 to 2 miles faster than LT pace. You may want to run the LT segments on a track, where you can closely monitor your pace. Because these workouts are very tough, alternate the long run with the LT/LSD combo run every other week, and after three or four weeks, don’t do either run for one recovery week.

Program is planned in four-week cycles, beginning with Cycle 3. Cycle 1 should include a gradual increase in mileage and Cycle 2 should include a continued increase in mileage with the inclusion of one LT workout per week. Cycle 5 may continue with more speedwork or go straight to the taper. Numbers represent miles. LT = lactate threshold; vVO2max = velocity at VO2max.

Dr. Jason R. Karp has a Ph.D. in exercise physiology, and is director and coach of REVO2LT Running Team, a freelance writer and competitive runner. He writes for numerous international running, coaching and fitness magazines. He has coached high-school and college cross country and track and field, and currently coaches athletes of all levels and consults with fitness professionals through RunCoachJason.com.