Runners talk about their reasons, challenges and results of running every day 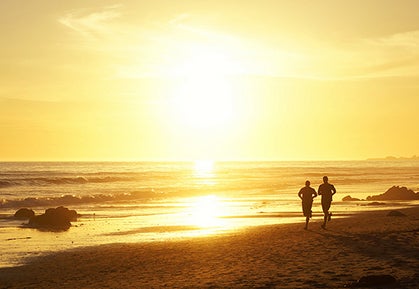 I can’t tell you the last time I logged more than five days in a row of running, but Una Beaudry can. She’s consecutively run more than 1,131 days and has no plan to stop.

Beaudry, 47, an IT Manager living in Ottawa, Ontario, and her husband, Steve, are not unique in their running streak. There’s even an official organization–the United States Running Streak Association–with a consistently updated data list of American Running Streakers. $20 will buy you a yearly membership and your streak can start immediately. However, you won’t be officially recorded as an “Active” member until you’ve run every day for one consecutive year, at a minimum of one mile per day.

The shortest streak currently on record? 399 days. And the longest? Currently Jon Sutherland, 63, of West Hills, California. He’s been running for more than 44 years.

What seems ludicrous to most is simple to Beaudry: “It’s routine now, part of my day.” The idea of running so many days in a row was strange for Beaudry at first, too. She says, “Part of the reason we started the running streak was because I had lost the ‘running love.’” But the streak worked. “I got the love back.”

Others have chosen to commit to running streaks as part of a spiritual practice. Doug Hay, a 28-year-old Washington, DC resident who blogs at RockCreekRunner.com, decided to begin a running streak as part of a pilgrimage. “A few days after I got engaged, I attended a yoga event where the speaker talked about journeys. Inspired by the talk and the fact that I was preparing for this life-long journey with my fiancée, I decided to start a daily pilgrimage where I set aside time to run and reflect every day until my wedding day.”

Hay set himself a minimum of a one-mile run each day.

“Anyone can shuffle for a mile, even if they don’t feel like running,” he says. And sometimes that’s what he did. It was shortly after Hay hit 300 consecutive days that he lost motivation. The novelty wore off, which was where support from his fiancée was especially needed.

“I think that because of the streak, my friends and family knew that it was greater than just a run. Skipping that run would mean so much more than skipping a non-streak run. So even if it was inconvenient for where we were or what we were doing, they were always supportive.” Then there were the days where Hay had to run the day after a 50-mile race.

“The absolute worst day,” says Hay, “was the morning after my bachelor party. I don’t think I have to explain why … ”

“It made it manageable. I think I would have quit sooner if there wasn’t an end.” On Hay’s last consecutive run, the morning of his wedding day, he was joined by 30 of his closest friends and family.

While some find their motivation through a running streak, others prefer to steer clear of logging any more than a few days of consecutive runs, for reasons that relate less to perseverance and more to health.

The United States Running Association, despite being a database for running streaks, has a document, “The Dangers of Streak Running,” that cautions against the very habit they support. John Strumsky, the author, urges no one to begin a running streak until he or she has been regularly running for at least six months. Overuse injuries, such as stress fractures and illiotibial band syndrome, are common concerns, he explains, especially when one hasn’t spent time building up the appropriate mileage slowly.

Holly Miller, a personal trainer, coach and massage therapist in Scottsdale, Arizona, believes moderation was the key in her running streak success–which, for her, meant an injury-free one-year running streak.

“Anyone I know who has streaked has always kept a moderate weekly mileage. The injuries happen when they crank up the mileage higher than their bodies can handle,” says Miller.

Although Miller was careful about not overdoing it, she did set a daily minimum of three miles, including the day after races.

“I had no problem running the following day,” she says. In fact, she claims her running improved and felt more effortless as the year progressed. The only times she experienced a lack of motivation was when she had the flu last February.

For some, like Miller, the running streak was a testament to how taking care of one’s body results in fewer injuries. And for others, like Beaudry, who is still out there running, the streak has improved more than just her physical being.

“It’s made me realize how mentally tough I am. It’s helped me face life’s hurdles.”

The Rule of 10: A Simple Training Tip That Will Change Your Running