Injured? Keep running—in the pool that is 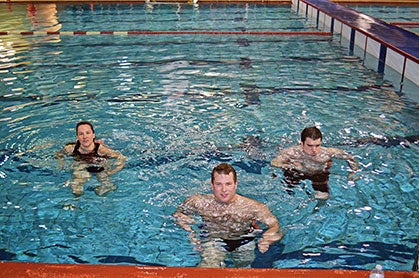 Most trail runners have felt the frustration of training hard only to suffer an injury. The thought of losing hard-won fitness while recovering has sent many runners out on the trails prematurely, sometimes resulting in even more serious injuries. Pool running is an option that allows athletes to complete workouts while injured, or can be a no-impact complement to a regular running program to help prevent injuries.

According to Barry Short, a certified personal trainer, distance runner and coach, pool running is a great fitness tool. “In working with professional athletes, I have found it to be a viable supplement or replacement to hard-surface running, as it maintains neuromuscular-specific conditioning.”

For Gina Spears-Burrows, an elite age-class triathlete, pool running was a key component of her training for the 2011 Kona Ironman. While out on a winter training run she slipped on ice and suffered a severe ankle injury. For the next 10 weeks, she took all her training into the pool. As she started to heal she gradually returned to the roads, blending pool running and running outdoors.

Says Spears-Burrows, “Running in the pool was mentally tiring but I did not lose fitness. In fact, my running form improved.” Spears-Burrows’ resultant triathlon time was 10:52:01, with a very fast marathon time of 3:40:10, the fastest in her age group.

Bryan Gagner, an avid trail runner who competes in the eastern Canadian trail-running circuit, was introduced to pool running while on the NCAA Division 1 university of Colorado cross-country team. Like Spears-Burrows, Gagner used pool running to maintain his fitness while injured. He now lives in rural New Brunswick with no ready access to a pool—but that hasn’t stopped him. He now does his water running in lakes, saying the cold water of the lakes has added therapeutic benefits such as reducing inflammation.

Most pools have waist-belt flotation devices available; alternately, you can straddle a pool noodle. You need to be buoyant enough to float; it is best to run in the deep end of the pool so your feet don’t touch the bottom. Maintain good running posture by keeping your chest forward and over your hips, shoulders back and your eyes forward. Use a complete range of motion, making sure your elbows come back behind your hips with every stride.

The workouts themselves will depend  on your training goals but whatever your dryland training calls for, you can do in the pool. A 5K run could be replaced with 30 minutes of pool running. Even speed work can be incorporated. During high-intensity running, aim for a cadence of 105 leg rotations per minute. You can also simulate uphills and downhills by tipping at the hips so your body is leaning slightly forward or backward a few degrees.

Start with a five-minute, general-movement warm-up in the pool, then 10 minutes of stretching and big movements to limber up. Short often has his athletes include simple exercises like hurdles, tucks, jumps and jumping jacks in the pool.

An aerobic tempo workout would include two to three sets of 10-minute tempo runs with four minutes of easy movement between each set. Adding pickups can make this even more challenging.

Anaerobic repeats in the pool can also simulate track work. One workout is 20 sets of one-minute sprints with 30 seconds rest. Before you get out of the pool, Short recommends concluding with five minutes of core work. Exercises includes front and back rolls in which you hold your knees in a tuck position and simply roll forward and backward. You can also do crunches with your feet on the pool wall. A fast-paced stationary mogul-skiing movement is also a good core workout.

Pool running can be more than just a replacement for dryland running. Since water is more than 700 times denser than air, every movement offers resistance training. Using equipment like webbed gloves, ankle or body weights can add more even more resistance to build strength.

Water running has also been used by people with chronic injuries and others for whom high-impact activity is not advisable—for example, arthritis sufferers and pregnant women. In these cases, all exercise should be approved by your family doctor.

So whether you are nursing an injury, trying to get faster or simply looking for an interesting new workout, pool running is worth a try. Or, like Gagner, you might choose to water run in the local lake, enjoy the scenery and avoid the chlorine.

The Best, Worst Workout I’ve Ever Done: This StairMaster Workout for Runners