Are trail running and pregnancy compatible? 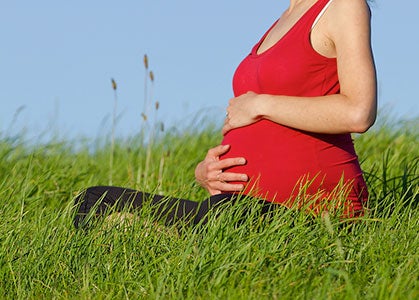 Debbie Livingston has run the grueling Greylock Trail Half-Marathon in Adams, Massachusetts, eight times. The last time she ran it, she was seven months pregnant. At mile eight, she passed a male runner, who said, “My ego just dropped about five notches.”

“I had a streak going there,” says Livingston. “I couldn’t not run it.” That’s how a lot of runners feel about their sport—it’s difficult to imagine not doing it, no matter what comes up. And if what comes up is a perfectly normal, healthy thing like pregnancy, is there any reason to stop running?

As many curious, conscientious runners discover, there’s not a lot of scientific literature out there about the effects of running on pregnancy. What there is, though, suggests that it’s not a bad idea. Anecdotal evidence from running moms-to-be supports that theory too.

When Livingston bounded up Greylock in 90-degree heat last summer, 20 pounds heavier and about 45 minutes slower than she was at her peak, she remembers, “The women were all like, `You go!’ But the guys said, `Are you sure you should be doing this?'”

Why shouldn’t she, she wondered? “There’s a lot of misinformation out there,” says Certified Nurse Midwife Lynn Chapman-Stern. “A lot of feeling of `Put up your feet and rest, Honey,’ instead of `Get out there and move!’ I’m even guilty of it myself sometimes,” she admits. “We all want to be careful around expectant mothers, but in fact, research says resting is useless. It does absolutely nothing to reduce the risk of miscarriage, for example. If a pregnancy is not going to stick around, it is not because you exercised.”

James F. Clapp, III, M.D., former Director of Obstetrical Research at Metro Health Medical Center in Cleveland, conducted a scientific study to determine whether “sustained, weight-bearing activity” (like running, for example) during pregnancy increased the risk of premature labor, and whether the “sudden foot-strike shock or bouncing” associated with running caused the membranes surrounding the baby to burst before they should. The answer was “no” on both counts. His study showed that women could actually continue running even after the cervix had begun to dilate without increasing the chances of membranes bursting before labor. And, he notes, “There is no suggestion that continuing regular exercise during pregnancy increases the incidence of delivering early enough to cause a problem related to prematurity for the baby.”

The study did yield the good news that women who exercised regularly during their pregnancies delivered earlier—after the 37th week, when all was well and safe—than those who didn’t. And, while there was “no increase in the incidence of low-birth-weight babies,” the regular exercisers had smaller babies. The babies’ length and head size were unaffected by their moms’ exercise habits, but they were born with less fat.

Livingston’s baby boy, Shepard, was born on August 15, 2006, at 5 pounds 5 ounces. “The doctors were a little concerned,” she admits, “but I knew it was fine.” The baby’s Apgar scores were eight and then nine. (Apgar is a one-to-10 scale for measuring the health and condition of a newborn, at one and five minutes after birth.) High scores like Shepard’s mean that his breathing, skin color, heart rate, muscle tone and other observable factors were excellent.

Doesn’t a baby inside a trail runner get bounced around an awful lot? “Jostle away,” says Chapman-Stern. “What do you think sex does? Besides, the baby is incredibly well cushioned. The uterus is a thick muscle and the baby has lots of padding.” Kim Boere, a personal trainer and pre-natal specialist from Orlando, Florida, even says some of her clients say the movement seems to rock their babies to sleep.

Or is there a danger of overheating the fetus if you exercise strenuously? One of the most widespread recommendations about exercising while you’re pregnant is that you should not let your heart rate get above 140 beats per minute. But—”Do you know what research that recommendation is based on?” asks Chapman-Stern. “Absolutely nothing!” The American College of Obstetricians and Gynecologists (ACOG) issued that 140 bpm guideline about 20 years ago, but they have since recanted. ACOG’s current guidelines for exercise during pregnancy are much less specific and say things like, “In general, participation in a wide range of recreational activities appears to be safe,” and “Recreational and competitive athletes with uncomplicated pregnancies can remain active during pregnancy and should modify their usual exercise routines as medically indicated.”

“There is no magic heart rate number for normal healthy people,” says Chapman-Stern. “We all start at different rates and there can be a 30-beat difference from one woman to the next.” Most experts now agree that “perceived effort” is the key factor. In other words: How do you feel? If it’s a hot day, run less. If you’re going uphill and feeling overheated, you may want to slow down.

What if you trip? A pregnant woman’s center of gravity shifts upward, from her hip area to her abdomen. Boere advises paying close attention to changes in your balance, especially if you’re a trail runner, but, like many effects of pregnancy, this one is very individual and may not be a problem for you. Livingston, who also teaches yoga, says she monitored herself carefully during yoga poses to keep abreast of any changes in balance and did not notice any. However, roots and rocks on the trail may be harder to see when you have a large belly in your field of vision.

Common sense dictates that you should choose relatively safe routes, pay attention and slow down if you have any concerns about the terrain. Although you obviously do not want to fall while carrying a baby, Livingston points out that it’s very rare to fall smack on your belly, pregnant or not. “When you start to lose your balance, you usually tuck and roll,” she says. Not a pleasant idea, but not usually a serious threat to either of you.

Of course, certain health conditions would preclude running. Anyone with preeclampsia, placenta previa (the positioning of the placenta in a way which blocks the cervix), heart disease, lung disease, persistent bleeding in the second or third trimester or ruptured membranes should not run while pregnant, and seek expert medical advice about any exercise plan. In addition, if you feel pain or persistent discomfort while running, you may be running too much, too fast or too late in your term.

That’s What Trees Are For

One of the biggest sources of discomfort, mentioned by nearly all pregnant runners, is the need for much more frequent urination. “There’s quite a lot of weight pressing on the uterus,” says Chapman-Stern, who advocates ample hydration in spite of the inconvenience. “And the bladder is right there. When I was going through my own pregnancy, I knew every bush in Central Park.” To Livingston, that’s one more reason to be a trail runner: “There are plenty of bushes to hide behind.”

Beyond such real concerns, “[Running while pregnant] is fear of the unknown,” says Boere. In the absence of more scientific research, women are susceptible to their mothers-in-law’s warnings and well-meaning neighbors’ fears. Even ACOG, in its official opinion on the subject concludes, “The information on strenuous exercise is scarce.” Their recommendation? “Women who engage in such activities require close medical supervision.” Never a bad idea. To that, the experienced and the experts add: Know your body, use common sense … and stay close to the bushes.

“It’s not like you have the baby and BOOM!—everything is back to normal again,” says Maryanne McDonnell, a Connecticut OB/GYN who counts several runners among her patients. “The first six weeks after the birth are almost considered part of pregnancy. You are recovering from a major physical and emotional event.”

First, your body needs to recover from any traumas during delivery. A Caesarian section, for example, is considered major abdominal surgery, and you should not be doing any heavy lifting or high-impact exercise for at least six weeks. Sutures need to heal and the incision needs to close. And, Dr. McDonnell warns, you should not assume you’re 100 percent healed just because the incision on the skin surface has closed. Internal incisions don’t necessarily finish healing quite as fast.

In addition, hormone levels remain at their elevated pregnancy level for about six weeks after delivery. Relaxin softens the cervix and ligaments to make delivery possible, but that extra looseness can make injuries more likely, so be extra careful not to twist anything the wrong way. McDonnell advises staging your comeback “like it’s the first time you’ve ever done this. Start off slowly and build gradually.”

Colleen Personett, an optometrist in Fairbanks, Alaska, had her first baby last December. She started walking and cross-country skiing about two weeks after the birth and got back into running within two months. Personett takes her daughter Sage with her on about 90 percent of her runs now, thanks to the Chariot, an adaptable baby stroller she loves, which actually works for jogging, biking and skiing (See www.chariotcarriers.com).

For the last seven years, Personett has been a regular contender in Alaska’s Equinox Marathon. Her pre-pregnancy times hovered around 3:45, earning her four spots in the top five. When she was six months pregnant, she finished in 5:15, and the last time, nine months after the birth of her daughter, she brought that back up to 4:30. “I could have done it faster if I wanted to put the time in,” says Colleen. “But my priorities changed. I’m working part-time and taking care of the family. And when you look back in 20 years, do you want to feel good about your marathon times or about raising well-adjusted kids?”

Should I Go or Should I Stay Home?