3 reasons to lower your mileage before your next ultra 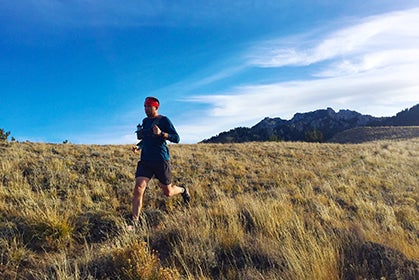 If you follow a lot of athletes on social media, you may feel inundated by photos of local trail-running friends or your favorite pros bagging peaks, soaking up smooth singletrack with big smiles and boasting, “Just tackled 30 miles, and felt great—again!” Your knee-jerk reaction is likely, “I’ve got to get out there. I’m missing all the fun. I need to knock out the miles!”

Not so fast. While it’s easy to put athletes who run 100+ weekly miles on a pedestal, they tend to overshadow the many runners who compete in ultramarathons on training that averages 50 miles per week or less. The benefits of low-mileage training are significant, and should be given a fair shake as an alternative to high-mileage training plans. Here are three reasons why.

Any training session run at a higher intensity or longer distance than the runner is used to brings with it muscle damage that, according to a 2013 study published in The Scientific World Journal, can contribute to delayed onset muscle soreness and strength loss for up to seven days after the workout. If you are running six days per week, chances are the cumulative muscle damage is increasing your risk of injury and burnout.

Kerry Collings, 65, of Midway, Utah, has been running ultras for over 20 years, and has finished 20 100-mile races, including seven at the famed Hardrock Hundred Endurance Run. “I used to run marathons and trained up to 100-mile weeks,” Collings explains.  “It seemed like I was always on the verge of injury.” He now averages 35 miles a week in training, and hasn’t had to take any time off due to running-related injuries since lowering his mileage.

“Although high-volume run training week in and week out will more or less guarantee some level of success during the ultramarathon, it’s hard to avoid the pitfalls of overuse injuries such as plantar fasciitis, IT band syndrome and stress fractures,” says Garrett Peltonen, a PhD candidate in exercise physiology and ultramarathon coach based in Madison, WI. “Runners should find a mileage that ensures a high level of motivation, hitting the start line injury-free and with limited muscle damage.”

Success in ultra races depends on more than just logging miles upon miles: the athletes who show the most improvement are the ones who train smart.  Specificity in a training plan incorporates training on terrain and in conditions that simulate those of race day, and is no less important than mileage.

“I focus more on the elevation or technicality of a run than the overall distance,” says John Brown, 34, of Bluffdale Utah, a nine-time ultramarathon finisher. “I normally only run mountain races, so I focus on climbing as much as possible. During my core training weeks I try to run a minimum of 10,000 feet of elevation [gain]—even in low-mileage weeks of 20-30 miles.”

“The most important aspects [of a race] to match are the topography and footing,” says Bryon Powell, author of Relentless Forward Progress: A Guide to Running Ultramarathons and editor of iRunFar.com. “There’s nothing worse than putting in a ton of miles in training and having a muscle group fail [on race day] for lack of a few training runs on race-appropriate terrain.”  Weather is also key, says Powell: “If you’re focusing on a race that will be a good deal warmer than you would run in [normally] in the months leading up to the race, a few weeks of quality heat training can make or break your race.”

Takeaway:  Specificity trumps mileage.  Rather than targeting a set number of miles, aim for three to four long runs with similar terrain, elevation gain and weather conditions as your target race.

Lower weekly mileage—or time off from running during the off-season—opens up time that runners can use to reap the benefits of cross training.

Scientific research has suggested that strength training can enhance running performance.  A 2008 study published in Medicine and Science in Sports and Exercise found that performing four sets of four half squats at maximum weight three times per week for eight weeks, in addition to normal running training, improved athletes’ running economy and time to exhaustion at maximum aerobic speed.

Cross training can also be a mental refresher. Brown dedicates six months of each year to high-intensity interval training and CrossFit workouts, and the prolonged time off from structured running keeps him excited about the sport. “When the snow is melting, I can’t wait to put my running shoes back on,” he says. “It’s as much of a mental boost as a physical one.”

Some higher-mileage pros also embrace off-season cross training.  Swedish-born Emelie Forsberg and Spanish super star Kilian Jornet spend their winters ski-mountaineering, a sport that combines backcountry skiing and mountaineering. “I can live from [ski-mountaineering] during the winter, and it’s a really nice complement for Skyrunning as well,” Forsberg told CNN.com. By dialing back the running and pursuing another sport come winter, Jornet and Forsberg are able to maintain their strength and aerobic fitness while giving their joints and bones some much-needed time off.

Takeaway: Whether you take up a second sport in the off-season or consistently complete two to three cross-training sessions per week throughout the season, cross training can eliminate muscle imbalances, increase overall strength and power and provide a mental and physical break from running.

Rebecca is a freelance writer and multi-sport endurance coach (www.teambeckcoaching.com) based in Salt Lake City, Utah.