Many of us race too often to race well. Sage Canaday explains why, and how you can structure your training to maximize your trail and ultra race results 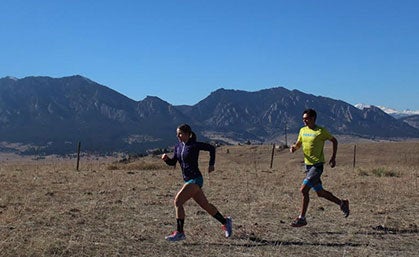 Understanding how to periodize your training allows you to be in peak fitness for your goal races, without burning out, as Sage Canaday (right) and his girlfriend and co-coach Sandy Nypaver teach athletes. Photo courtesy of Sage Canaday

In college, I ran cross-country and track for a coach who had us race as infrequently as possible. “You can’t have it all, all the time,” he would tell us, and the races that mattered were in November and May. Just as pulling carrots from the ground to see how they’re growing is counterproductive, attempting to PR each month of the year means that that PR would remain slower than it could.

A few years later, as I cut my teeth in trail and ultra running, I was astounded at how often people raced distances in excess of a marathon—once a month or more seems commonplace during the peak racing season, even among pros. There are a lot of reasons for that—fun, camaraderie and, increasingly, prize money—but there is no way, I thought, that anyone is racing their best when they race that frequently.

Sage Canaday, 29, of Boulder, Colorado—who was faster than me in college cross-country and remains faster than me on the trails—agrees. “I believe you can be at about 90 percent of your maximum potential and fitness for the majority of the year,” says Canaday, whose 2014 season included wins at the Speedgoat 50K and The North Face Endurance Challenge 50 Mile in San Francisco. “However, if you really want to target a certain race and go for that 100-percent effort and performance, you’re going to have to make sacrifices in your training and racing schedule.”

Periodization is the process of building your running systems one at a time until they accumulate into a peak race performance. Canaday, who with his girlfriend, Sany Nypaver, coaches athletes at SageRunning.com and is the author of the upcoming ebook The Sage Running Secret: A Guide to Speedy Ultras, compares it to making a pizza.

“Periodization comes down to looking at chunks of time in your training schedule and deciding what sequence and type of different workout stimulus you want to induce … with an end result in mind,” he says. “We are following a recipe—your training plan—and then carefully adding in certain amounts of ingredients—your different types of workouts—all in the correct proportion and at the right time.”

In training, as with baking, Canaday says timing is just as important as proportions.

“Do too much of any type of workout or do a workout at the wrong time, or both, and you could end up coming out ‘flat’ and your pizza isn’t going to taste very good,” he says. “If you overtrain and work out at too high of an intensity, you might burn out—much like overbaking a pizza.”

In other words, to really nail a race, you not only have to set aside a few months to train, but you have to structure those months in a way that accumulates fitness, addresses your weaknesses and builds on your strengths, and does so with an eye toward the specific course on which you’ll be racing.

Periodization typically organizes training into phases that focus on different aspects of a runner’s fitness. Photo courtesy of Sage Canaday

The first periodized plan I ever saw—one I still roughly follow today—was written for a marathon by Minneapolis-based coach Chris Lundstrom. It consisted of:

6 weeks: base-building, up to peak mileage, some hill sprints but no speed work

The idea is pretty simple: you first build a base (the “crust” of the pizza), develop your top-end speed and efficiency, hone your race pace and prowess over longer distances, and then rest just the right amount to utilize it all. As a bonus, you try to do long runs on a course that closely resembles the surface and terrain you’ll see on race day. Most marathon plans are a variation of this—some switch the VO2 and tempo phases—and those general principles can be applied to almost any race.

Canaday’s athletes follow a 16-week plan (preceded by some base mileage), and while each phase of the training program emphasizes a certain type of workout and physiological system, every 14 days or so will include one of every workout type: “Basic speed, easy-pace endurance, a long-run stimulus, a lactate-threshold stimulus and maybe even an element of VO2 max/running economy,” he says.

Early on, Canaday introduces some relatively short and easy speedwork: “Something like a 20-minute tempo run at 85% of maximum heart rate or effort, or … four to five 100-meter short ‘stride’ accelerations after their easy runs,” he says. “The key early on in training phases is not to induce too much lactic acid.”

More intense phases of the plan include more high-intensity workouts like VO2 max intervals, “but we work with variables like the duration of the interval, the recovery period and the volume of quality miles in each workout,” says Canaday. “Always working on progression and allowing for adaptation is the real key. We try to develop consistency in all the training phases but at the same time we are constantly introducing slightly new challenges that allow for adaptation and a more fit athlete.”

In other words, if Canaday’s plan is like a pizza, the one I first outlined might be more like a Chipotle burrito, with each ingredient very … distinct. Still, they both get the job done.

This doesn’t necessarily mean you’ll have to choose between racing well and running the races you want to run—it just means you’ll have to plan carefully.

“You can only be at or near 100 percent for a limited time, and that level of fitness and performance is only specific to the demands of a race that you trained for,” says Canaday. He admits he might race too frequently, but says he takes care to pick races that aren’t too drastically different from each other to make the best use of his fitness. “Being in great mountain-running shape and transitioning from racing a very hilly 50K to racing a very hilly 50-miler is a much better plan and build-up in terms of periodization than trying to run a flat and fast road marathon and then trying to do a 100K in the mountains.”

He says specificity in training is key—as is patience. Reining yourself in after the race of your life might be a tough pill to swallow—or even seem counterintuitive—but it will pay off at your next goal race.

“For people who risk overtraining or burnout, I always think, ‘You can’t burn out unless you’ve caught fire,’ ” says Canaday. “Once you catch fire and nail a race, you might want to consider taking a little break and starting your training all over again.”

The Five Most Read Trail Runner Articles in 2022 (So Far)