Transform your running with heart-rate training 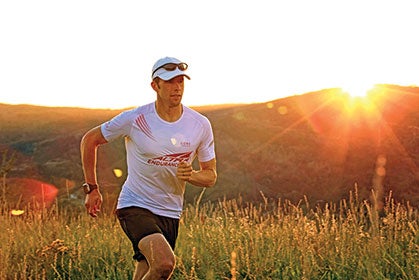 Larisa Dannis was a recreational runner five years ago. When the New Hampshire native ran her first 100-miler, the 2011 Rocky Raccoon, it took her 25 hours. When she returned in 2014, she ran it in 17:10. Several months later, she took second at the Western States 100, besting a competitive field that included previous Western States champions Pam Smith and Nikki Kimball.

Now 27 and living in Mill Valley, California, Dannis attributes her success to a surprisingly simple training method: using a heart-rate monitor to train aerobically—that is, at or below her maximum aerobic heart rate (MAHR)—100 percent of the time.

“For two dedicated years, I didn’t do a lick of speedwork,” says Dannis. “There is a lot of value in taking time to build your aerobic base. Many runners get focused on volume and high intensity, which just leads to major metabolic burnout issues.”

“Between 95 and 99 percent of the energy used for endurance sports, including competition, is derived from the aerobic system,” says Dr. Phil Maffetone, an endurance coach who trained six-time Ironman champion Mark Allen. “This is true for events lasting more than a few minutes, and races from the mile to the marathon, and beyond.”

Many runners, however, spend the majority of their training hours inadvertently running anaerobically—that is, above their MAHR.

According to Maffetone, anaerobic running can actually decrease the number of aerobic muscle fibers. It can also flood the body with damaging levels of lactic acid or the stress hormone cortisol, reducing its ability to recover between workouts and increasing the chances of injury.

Maffetone’s ideas are nothing new. Endurance coaches have sung the praises of aerobic training since the 1960s, when legendary running coach Arthur Lydiard pioneered the “long, slow distance” (LSD) approach. Lydiard encouraged his middle- and long-distance athletes to spend a minimum of three months developing their aerobic capacity before incorporating anaerobic workouts like speedwork, intervals and tempo runs.

After her initial two-year all-aerobic stint, Dannis introduced one weekly anaerobic workout. This simple addition helped her drop her 2:54 marathon time—run after solely training aerobically—to a 2:44. Nevertheless, she still does 90 percent of her training below her MAHR.

Be a Fat-Burning Machine

When running at an anaerobic level, your body relies on glycogen stores in your muscles and liver. During aerobic running, energy is primarily derived from fat stores.

“Most athletes have two to three hours of available glycogen stores,” says Dave Clark, owner and head coach of BMS Multi-Sport in Carbondale, Colorado. Regardless of body type, he says, we all carry fat stores that can fuel more than 100 hours of aerobic activity: “If you can increase your ability to utilize fat for energy, you can go for a much longer period of time without bonking.”

“I used to have to suck down a gel every half hour because my body needed to burn carbs,” says Dannis. “Now I can go for a three-plus-hour run and not need to eat anything. It’s so much easier to have that energy in my legs instead of focused on digesting, and I almost never have stomach issues anymore.”

After determining your MAHR (see below), your task is simple: spend several months running with a monitor and ensuring your heart rate doesn’t exceed your MAHR. Be prepared to run slowly—or even walk—at first.

Liza Howard, 43, of San Antonio, Texas, an avid trail runner and now coach, trained with a heart-rate monitor for several years. At first, she says, “I’d make it about 50 yards down a flat road before I’d have to walk because my heart was already pounding away 20 beats per minute faster than I was supposed to go.”

The next year, at the Rocky Raccoon 100, she shaved nearly six hours off her previous year’s time and handily won the race.

To gauge your progress, Maffetone recommends doing a test once a month—a four-mile run at or just below your MAHR, tracking your mile splits. Over time, you should be able to clock faster miles while staying aerobic.

In his book, Finding Ultra, couch-potato-turned-elite-endurance-athlete Rich Roll writes about the first time he set out with a monitor to run “in Zone 2,” i.e. aerobically. His mile pace was 10:15. Over several months of aerobic training, he watched it drop to 9:30, to 8:30, to 8:00, and so on—all run below his MAHR.

While time-constrained athletes may be tempted to skip this sometimes lengthy aerobic-training period—anywhere from two months to a year, depending on one’s athletic background—Clark warns that doing so greatly increases the risk of injury. Be patient and commit time upfront to dedicated aerobic training, he advises. Incorporate higher-intensity workouts only once your aerobic mile times begin plateauing or as your target event draws near.

At anaerobic training levels—often referred to as Zones 3, 4, 5a, 5b and 5c—a monitor is apt to be less helpful, partly due to technical limitations such as lag time in heart-rate display on short intervals. For these workouts, perceived rate of exertion—how hard an interval feels—is often a better gauge than heart rate.

“There’s no ego attached to heart rate,” says Howard. “Especially if you’re running with a group, it makes it legitimate for you to run slowly enough. It’s really useful for folks who have a hard time backing off pace.”

Dannis uses a monitor not only in training, but also to pace herself at races. Her watch displays nothing but heart rate. At Western States, she slowed down or power-hiked any time her heart rate crept above her MAHR. She finished the race 100-percent aerobically in 18:29, with an average heart rate of 134.

“It’s all about finding that level of effort you can sustain for the whole distance,” says Dannis. “Otherwise it’s easy to go out fast or go too hard on the climbs. Running by heart rate gives you confidence and comfort.”

“I want to be that 80-year-old lady cranking out 100-milers and having a blast,” she adds. “The only way to do that is to find ways of training that are sustainable and good for the body. That’s why I love this heart-rate stuff. It enables me to perform at high levels, but also keeps me healthy.”

Phil Maffetone suggests a formula of 180 minus your age, with several adjustments based on your training history.

1. Complete a thorough warm-up, followed by 30 minutes running at the maximum, consistent effort you can sustain for that duration.

2. At 10 minutes in, click the lap button on your monitor.

3. When you upload your data, find your average heart rate for the remaining 20 minutes.

4. Based on running-specific charts in Friel’s book, Total Heart-Rate Training, multiplying this number by 0.9 will approximate your MAHR.

Yitka Winn is a freelance writer who relishes excuses to run slowly. This article originally appeared in our July 2015 issue.

How To Train Your Breath For Better Performance

How To Use Hill Intervals For Stronger Climbing