A simple way to improve your form, avoid injury and run faster 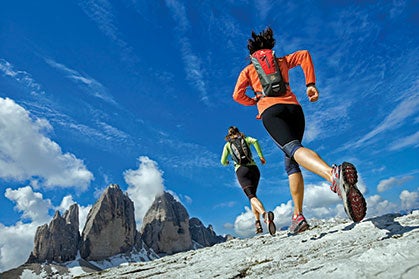 Hit the right tempo—at least 45 strikes per foot in 30 seconds—to improve your running form and injury resistance. Photo by Patitucciphoto.

Trail running isn’t easy. Steep ascents and descents, rocks, roots and mud are all hurdles of the game. It takes lots of energy to do all that dodging, weaving and dancing. What’s more, the trails increase the likelihood of injury from tripping, slipping and charging up and down those quad-crushing slopes.

To increase your running efficiency and resistance to injury, the following simple running form tweaks offer an easy, well, at least simple, answers to a tough sport’s tough questions.

Why is running form important?

Along with the oxygen we need to exercise, our planet has also provided us with gravity, one of the major forces that allow us to run. Due to this unavoidable pull back to the earth’s surface, we hit the ground with one-and-a-half to three times our body weight, depending on our running speed. it’s easy to see that, if we fail to manage these forces, we’ll quickly wind up with all sorts of ailments.

“Optimal form decreases injury rates and increases running efficiency,” says  Jeff Waldberg, owner of Los Angeles- based Ortho Pro Physical Therapy and The Runner’s Clinic, and a physical therapist with a master’s in orthopedic manual therapy. “You become a faster runner by eliminating faults like unnecessary vertical motion, heel striking and improper arm swing. By decreasing these uneconomical movements, you lessen the load on the muscles, tissues and joints doing the work.”

How do we know if our form needs improvement?

The biggest telltale sign indicating faulty form is repetitive injuries on the same side of the body or in the same muscle groups or joints. Common maladies include achilles tendonitis, plantar fasciitis, patellofemoral pain, iliotibial band syndrome, hamstring pulls and stress fractures.

Waldberg suggests, “If you follow a sound training regime or work with a coach but constantly get injured in the same area, it’s time to look at your form.”

What is the easiest way to improve running form?

The easiest home remedy for fixing your gait is to increase your cadence. Count how many times one foot hits the ground in 30 seconds. It should be about 45 times. Waldberg, who’s analyzed the form of more than 3000 runners, has discovered that anything less than this count inevitably leads to form mistakes and injury. “For most runners, it’s eye opening,” says Waldberg. “Once I work with a runner to quicken his cadence, most pains subside and efficiency returns.”

Cadence improvement isn’t entirely easy. Like riding a bike for the first time, you’ll need to get the hang of it. During the initial process of retraining your neuromuscular system, you’ll make previously less-used muscles sore and will need to slow your pace until you feel comfortable with the higher foot-strike count. Your stride may seem short at the beginning, but, as you adapt to a quicker cadence, your stride will naturally lengthen. A metronome (from an app downloaded onto an iPod or clipped to your waist band) set at 180 beats per minute or a cadence foot pod that syncs with a GPS watch are good ways to keep your rhythm steady during this introductory phase. Begin practicing on smooth, flat surfaces, like smooth trails, roads and treadmills, before moving to challenging trails.

The second facet to work on is landing neutrally, i.e. not on your heels. On the website, Biomechanics of Foot Strikes  & Applications to Running Barefoot or in Minimal Footwear, Dr. Daniel Lieberman, an evolutionary biology professor at Harvard, and his collaborators found “… that most forefoot and some mid-foot strikes (shod or barefoot) do not generate the sudden large impact transients that occur when you heel strike (shod or barefoot).” Steve Magness, who has a master’s in exercise science from George Mason University, explains further on his blog The Science of Running: “Initial foot contact should not occur on the heel even when running slow. by hitting forefoot or mid-foot, the braking action is minimized and the initial impact peak is reduced.”

However, this technique can be difficult to accomplish because we can’t watch ourselves run. Often our own perception of what we’re doing is radically different from the reality. In order to better feel the ground, many athletes try minimalist footwear, but these tools have proven risky. In a presentation submitted at the 2013 meeting of the American College of Sports Medicine, Marissa H. Cohler of the Rehabilitation Institute of Chicago and Ellen Casey of Northwestern University Feinberg School of Medicine surveyed 566 runners about their experiences with minimalist running shoes (MRS). They found that a significant 32 percent of respondents “suffered an injury or pain while wearing MRS.” Josh Brimhall, owner of red rock running company in Las Vegas and finisher of more than 60 ultramarathons, explains, “Minimal footwear, by design, lowers the heel height and lessens the amount of midsole cushioning compared to traditional shoes. That accentuates the stresses on the Achilles and calf muscles and increases the landing impact on the lower leg.”

A safer way to evaluate potential form issues is to get an in-person running assessment done by an expert such as Waldberg. Find the nearest form specialist online or by asking for recommendations from local running groups and coaches. At the end of the session, you will typically receive a video with corrective commentary and advice that you should revisit often.

The final component that all runners should invest in is a specific strengthening and flexibility routine. Done two to three times a week, a 10-to-15-minute routine will bolster the muscles, tendons and ligaments against injury and fatigue.

Active isolated stretching, the act of contracting one muscle to allow the opposing muscle to relax and lengthen, increases range of motion and promotes circulation. Target your back, glutes, and legs with double-leg pelvis tilts, bent- and straight-leg hamstring stretches, trunk extensions and hip-adductor and -abductor stretches.

What does this mean when we’re on the trails?

The temptation is great to vary our form  on the trails, especially on technical, steep terrain. However, Waldberg reminds, “Do not alter your cadence. Keep your cadence fixed whether you’re running uphill, downhill or over tricky surfaces.”

A proper cadence while running uphill keeps the major muscle groups (calves, hamstrings and glutes) from fatiguing. A quick and shortened stride allows each muscle to recover between steps.

While running downhill, our tendency is to let gravity do the work, which can lead to over-striding. Maintaining a quick turnover keeps us over our center of gravity, reduces the forces on our quads and knees and allows us to recover from a near fall if we step in a hole or catch a foot on a rock. The same goes for icy and muddy surfaces. Remain over your center of gravity with quick feet to reduce the time spent on these hazardous surfaces and minimize the chance of sliding.

The time is now!

Be proactive instead of reactive. Instead of seeking help after becoming injured, take preventative action. Most of us have inefficiencies that can be identified and worked on, so work toward improving your form today. “Nine times out of 10, the patients I see are already injured when they walk through the door,” says Waldberg. “I’d like to see that trend reversed.”

Veteran trail racer Ian Torrence, 40, of Flagstaff, Arizona, has finished 173 ultras, 24 of which were 100-mile races, and is the lead ultrarunning coach at McMillan Running.

The Science About Tending to Tendon Health