How to regain your trail-running fitness

At some point in their careers, most runners face periods when they’re forced to stop training due to illness, injury, … 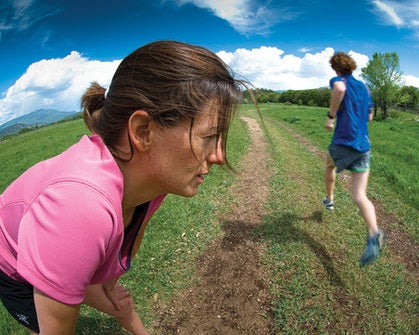 At some point in their careers, most runners face periods when they’re forced to stop training due to illness, injury, travel or overriding life priorities. By the time they return to running, their fitness has been significantly reduced. This is called detraining: the partial or complete loss of training-induced physiological adaptations in response to a cessation of a substantial decrease in training load. The subsequent process of regaining one’s former fitness level is called retraining.

To understand the process of detraining and retraining, let’s study the experiences of two trail runners, Joe and Sharon. Joe is a 45-year-old competitive runner with a marathon time of 2:50 and 10K time of 37 minutes. He’s trained consistently for 10 years with few interruptions, until now. Sick with pneumonia and completely bed ridden for three months, he’s finally recovered and ready to resume training.

Sharon, 30, has been trail running for five years, logging 25 to 50 miles a week, and has finished middle-of-the-pack at several 50K and 50-mile ultramarathons. She just returned from six months of traveling in Asia, during which she did not run but hiked daily.

Both fretted about how much hard-earned fitness they had lost and how they faced a long, hard slog to regain it. A few days’ rest or inactivity would not have impaired Joe or Sharon’s performance, but research has shown that after two to three weeks of inactivity, fitness begins to decrease dramatically.

Matters of the Heart

During detraining, rapid and dramatic changes occur in the heart, which is the engine driving your endurance. After only four to seven days of no running, the heart’s left-ventricle dimensions, wall thickness and mass begin to decrease, contributing to less blood being pushed through the heart.

Equally as dramatic are the associated reductions in maximal oxygen uptake. After two to three weeks of detraining, Sharon’s VO2max, or maximal oxygen uptake (the body’s ability to process oxygen), decreased four percent, causing her race times to slow by about two to five percent. For ultrarunners who take time off, the longer the intended race, the more noticeable the drop in endurance.

haron’s V02max decline was less steep than Joe’s because she had less fitness to lose and was still active. A study of female track athletes who took three months off after their racing seasons showed they lost 15 percent of the VO2max they had reached during the race season. This means that Sharon’s aerobic fitness, after six months’ vacation, has returned to its original level of pre-training fitness—she’s lost all her cardiovascular conditioning.

Joe is even worse off. One study found that completely bedridden people lost their VO2max faster than if they were moderately active. This same study found that VO2max declines by a staggering 27 percent, a reduction of about one percent of VO2max per day over three weeks. Thus being bedridden encourages a much steeper decline than just being moderately active and not training. And the VO2max of very fit runners declines more and faster than those who are less fit.

Joe’s sub-maximal heart rate began to decline after the first 20 days of bed rest, and his sub-maximal stroke volume (the amount of blood ejected from his left ventricle with each heart beat) declined 25 percent. His maximal cardiac output (the maximum amount of blood pumped from the heart in one minute) also dropped 25 percent. The result was a decreased ability to transfer oxygenated blood from the lungs to the working muscles and return carbon dioxide to the lungs.

If this isn’t disheartening enough, after two to four weeks of detraining, both Joe and Sharon’s blood volume—and therefore oxygen-carrying capacity—decreased nine percent.

Also, their muscles lost capillaries, the small arteries that deliver oxygen to the working muscles (contributing to lower VO2 levels).

What about Joe and Sharon’s fuel levels? Glycogen—the fuel stored in muscles and the liver—is a major source of energy for endurance runners. Joe’s glycogen stores decreased by more than 40 percent after four weeks of inactivity, and Sharon’s only slightly less, around 30 percent.

And while Joe and Sharon were not running, they likely lost as much as 43 percent of their slow-twitch (endurance) muscle fibers. The majority of this reduction takes place in the first two to four weeks, but Joe’s loss will be steeper because of his complete inactivity. However, Sharon’s longer running layoff has resulted in a similar loss. Combined with these other myriad changes, Joe and Sharon would find their racing times significantly slower, almost at their pre-training levels.

Joe and Sharon’s situations illustrate how critical it is that runners never stop training entirely, even in off-season. Joe, being initially fitter than Sharon, faces a longer, more difficult battle to regain his lost fitness. It could take up to six months for Joe to completely retrain, due in part to his age. Evidence shows it takes longer to retrain as you age, because as we age we lose fast-twitch muscle fibers, fiber strength and muscle elasticity. Thus, our ability to contract our muscles at maximal or sub-maximal levels is reduced, especially during aerobic activity.

Joe’s return to training should be very gradual, because he is completely de-conditioned and severely debilitated from his illness. He should start walking two to three miles, several days each week, and gradually add jogging “bursts” of two to three minutes, with a two- to three-minute recovery walk. He can increase his jogging stints by two minutes every week, until he is running his former weekly mileage, which will take four to six months. It will require a few more months to regain his anaerobic threshold and maximal oxygen uptake levels. With his mileage base re-established, Joe will be ready for speed work by the seventh or eighth month.

Sharon also faces a long comeback trail but has the advantage of not being debilitated from illness and being younger. Therefore she’ll bounce back in three to four months. She can start jogging two to three miles a day, and add a mile to each run each week. By building up to weekly long runs of two to three hours for the last two to three months, Sharon will be ready for an ultra in six months.

Roy Stevenson has a master’s degree in coaching and exercise physiology from Ohio University. He competed in New Zealand championships on the track, road and cross country, and has coached hundreds of Seattle-area runners.