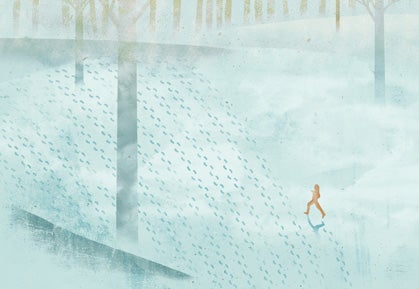 It’s winter. The trails are ankle deep in slippery mud and the days are short. You may welcome these changes as an excuse to slack off on your training—in fact this is the time to increase your training volume, especially if you aspire to run ultras. Why? “Off-season” training develops maximal oxygen uptake, improves economy of movement, improves cardiac output, increases blood volume, increases the capillary network that feeds the muscles and increases the volume of glycolytic and oxidative enzymes in the muscles—the very essence of aerobic activities.

To lay your foundation for becoming a stronger trail runner, employ three types of training: long, steady aerobic running, hill running and strength training. But the process takes a few months so don’t dally during the holidays.

Says Brian Morrison, 32, a second-place finisher at the 2007 White River 50 Mile National Championship, “Winter base building is absolutely critical to racing well through the spring and summer. These base miles prep your body for the more taxing mileage that follows in the race-season build up.”

Adam Lint, 27, of Seattle, Washington, puts in 100 to 120 miles per week during his winter conditioning phase. In 2008, his approach paid off with a third-place finish in the USA 100K Road Championship and a second in the White River 50-Mile Trail Championship. “Running is a year-round sport, and that is one of the things I love about it.  Even when resting it is important to stay active,” says Lint. “In 2008 I cross trained in the pool and in the gym on my easy days and after races.”

Getting your body used to moving continuously for long periods is the main requirement for distance running. Your off-season focus should be on running slower than in the racing season, and going for higher volume to maximize your aerobic conditioning, train your slow- and fast-twitch muscle fibers and “teach” your body to efficiently burn carbohydrate and fats. This endurance base will enable you to safely incorporate speedier training as you approach racing season.

“The key to base building is to keep it pretty easy,” says Morrison.  “A common mistake is to run overly hard in the winter and come out feeling flat and over-trained by spring.  I try to do one day a week of tempo running from three to six miles on flat terrain, while the rest of the week is very easy running.”

Gradually lengthening your long runs over a period of eight to 10 weeks should be your primary goal. A typical training schedule contains at least one long run (of 1.5 to 2.5 hours) per week and one or two medium-distance runs (of 1.2 to 1.5 hours). Recovery runs or cross-training workouts are 30 to 45 minutes. Every third or fourth week, cut back your running by 30 to 40 percent for recovery.

Phase 2: King of the Hills

The second phase entails building strength with a four- to six-week cycle that includes hill running. Hill training improves lactate tolerance and leg strength, increases your stride length and frequency on the flats, drives your VO2max sky high, further improves your running economy and—perhaps most important for trail runners—gives you confidence when you are facing a daunting uphill slog.

“Hill training is a very important component of trail running and becomes exponentially more important the hillier your target race course is,” says Morrison. “When I’m in peak training mode, I’ll run two ascents up a four-mile climb at threshold heart rate.  However, I find as much benefit to running the four-mile descent hard too; these long descents really build your quad strength.”

“Hill repeats allow me to get in quality fitness work without the pounding on the flats or downhills,” says Lint. “I do everything from short, one- to five-minute hill repeats on a gradual grade to four-mile repeats with lots of elevation gain.  These workouts also help me stay injury free.”

Eleven-year ultra- and road-racing veteran, Howard Nippert of Blacksburg, Virginia, plans his hill training to suit upcoming races. Says Nippert, “I try to plan runs similar to the terrain and profile I’ll race on, or even exaggerate them, that is, climb and descend more than necessary.”

Exercise scientists no longer believe that simply running is adequate for improving running performance. Research shows that resistance training strengthens fast-twitch muscle fibers (which come into play during the latter stages of ultras and while running uphill), improves neuromuscular coordination and balance, gives better resistance to muscular fatigue and reduces the risk of injury.

By training your muscles to deliver more power with each stride, the larger the range (or reserve) will be between your cruising and maximal efforts when trail running. This translates into cruising at a lower percentage of your maximum effort for a longer time. Strength training is best done concurrently with your aerobic- and hill-running phases.

Despite the reduced foot-strike impact of trail running, it’s harder on your hip, knee and ankle joints than flat road running because of the hills, rough, uneven terrain, tight corners and slippery ground. Thus, strengthening your “steering muscles” (the hip adductors, abductors, flexors and extensors) will improve your trail running tremendously, especially if you’ve never trained them before. Strengthening these stabilizers is one of the most underutilized training techniques for runners, yet can yield great benefits in just a few months of training.

Morrison lifts weights three days each week. “I like to incorporate some stability training as well,” he says. “For example, I do curls and presses while standing on a BOSU ball.”

Strength training should be performed two to three days a week, with at least one rest day between each session. If you are very fatigued and sore after a workout,  next time, split it into two workouts and allow two days rest between each.

Start with one set of eight to 12 repetitions of each exercise, increasing to two sets max as you improve. Lint does some “high-rep upper-body work and some stabilizing core work, using the BOSU ball, including sit-ups and oblique sit-ups.”

Three runners and their contrasting approaches to off-season training:

> Howard Nippert, winner of the 2005 JFK 50-Miler in 5:51:42 and the Rattlesnake 50K in 1998, does long runs of up to five hours during his conditioning/base-building phase. He follows that with a medium-long run or an interval/tempo/stamina workout.

Nippert runs seven days per week, often twice daily. He chooses two or three key races throughout the year and, “depending on when they occur, I may be in a training phase at any time. If it’s 10 to 15 weeks before a race, I am in a conditioning phase.”

> Some runners adapt to two or three long runs each week, while others struggle to do just one. Adam Lint belongs in the former category, running up to four long runs per week and it’s not unusual for him to do a 50-miler as a long run.

> On the other hand, Brian Morrison averages 50 to 60 miles a week during his winter conditioning, including a long run of 14 to 16 miles. Both Morrison and Lint hit the trails twice a week throughout the winter.

Get to the gym this winter for summer success

Lean back on machine with back firmly against pad. With ankles, knees and hips aligned, slowly straighten legs. Do not lock out your knees. Press heels against the platform through full range.

Stand upright with feet together, holding dumbbells at your sides. Slowly take a large step forward with one leg, bending both knees. Your rear knee should come close to the floor. Using your extended leg, push yourself back to the starting position. Advanced lunge: keep moving forward with each step, instead of returning to your original standing position.

Adjust seat so knees are aligned with axis of the machine. Lean back against pad, extend legs straight out to full extension, and slowly return.

Lie face down on bench with knee joints aligned with the axis of the machine. Adjust leg pad so that it is on lower part of calf. Hold handles securely and flex knees as far back as comfortable. Return slowly to straight-leg position.

Using calf-raise machine, place shoulders under pad and rise up on toes, then slowly lower back so your calf muscles are stretched.

• Adduction on machine or with exercise tubing (Hip adductors)

To use exercise tubing, tie one end of three-foot length to a table leg and place left foot through loop at other end. With left side facing table, stand on right foot and draw left foot towards your body midline, with straight legs. Slowly let foot move back to starting position. Exercise can also be done on a seated Nautilus adduction machine.

• Abduction on machine or with exercise tubing (Hip abductors)

Tie one end of three-foot length of tubing on a table leg and place right foot through loop at other end. With left side facing table, stand on left foot and draw right foot away from your body midline as far as possible from your right side, with straight legs. Slowly let right foot move back to starting position at midline.

Exercise can also be done on a seated Nautilus abduction machine.

Place two-inch-wide rubber mini-band around ankles. Choose light, medium or heavy band that enables you to complete this exercise. This is a “sideways shuffle” exercise. Walk sideways by extending one foot out sideways, then let other foot move in toward it. Move 20 side paces to your left then to your right.

Tie one end of three-foot length of tubing on a table leg and place right foot through loop at other end. With back to table, stand on left foot and draw right knee forward until thigh is parallel with floor. Slowly lower right foot to starting position.

When you can do 20 standard sit-ups, add five pounds weight by holding a the weight on your chest.

Plant feet firmly on floor, with buttocks, shoulders and head on bench. Grip dumbbells so that your hands are above your elbows. Push arms straight up, then pull dumbbells in together. Pull shoulder blades together and hold them there, while lowering arms so that upper arms are parallel with floor.

Plant feet firmly against the foot platform, legs slightly bent and trunk 90 degrees to the bench. Grip handles, with wrists facing downwards or inwards depending on handle style. Slowly pull the handle straight back toward your stomach. Keep your shoulder blades squeezed together through this action. Slowly return to start position without bending forward.

Sit on bench with bench back pulled up to support your back. Feet flat on floor and a dumbbell in each hand, out to your sides. Push dumbbells directly up over your elbows, and pull them in towards each other. Slowly lower dumbbells so that your upper arms are parallel to the floor.

This article appeared in our January 2011 issue.
Roy Stevenson has a master’s degree in exercise physiology and coaching, and teaches exercise science at Seattle University in Washington. He has coached hundreds of serious and recreational runners and triathletes in the Seattle area.

A Beginner’s Guide To Weightlifting For Trail Runners