How long does fitness last after time off?

I am wondering just how long my fitness “lasts.” I ran a trail marathon in June and a hard 50K mid-September. But I didn’t run much in the next month, just two or three, five-to-eight milers. I would like to do a fall race, but wonder if I have to re-build all the conditioning I worked so hard for in the summer?

How long your fitness lasts is multifactorial. Your training history and how long you’ve been at a particular level of fitness play major roles. Sports Scientist Alex Hutchinson provides this analogy: “If you’ve been putting in consistent training over several years, you have a big iceberg that can sustain itself for quite a long time, even if you ‘unplug the freezer’—i.e. stop training. On the other hand, if your training is mostly inconsistent starts and stops, you never build up more than a few ice cubes, which quickly melt as soon as they’re out of the freezer.”

If you choose to rest completely or are forced to the sidelines by an injury, research shows your fitness gradually decreases for 12 to 14 days. After that initial falloff, you’ll see an accelerated fitness decline over time, including your lactate threshold and your body’s ability to oxidize fat.

However, several lingering benefits are thankfully harder to shake. Says Hutchinson, “There are long-term structural adaptations like a larger heart and more capillaries to deliver oxygen to your muscles that will endure for many months without training. So it’s not a case of starting again from scratch.”

Experts agree the most effective way to maintain fitness during a training lull is to perform short, hard efforts. Says Hutchinson, “Some classic studies in the 1980s found that two hard runs a week were as effective as six slower runs for maintaining aerobic fitness.”

So minimize your time doing no training, and inject some shorter, harder sessions when you do train. But, be careful with your return to racing—the time off puts you at a greater risk of injury.

Comment on this article with your questions for the Coach before Monday, November 24th. If your question is featured in Ask the Coach in the next issue of our print magazine, you’ll win a 21-oz handheld from Orange Mud (below). (This contest has closed; thanks for your comments!) 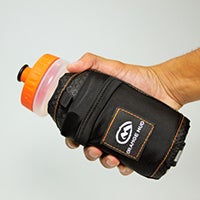 A Theory About Building Speed While Doing Long Races and Ultras

How Alcohol Tanks Your Heart Rate Variability and Sleep