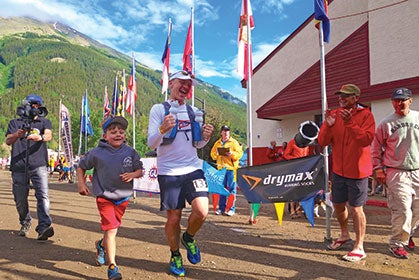 When I half-heartedly put in for the 2014 Hardrock 100 lottery, I had zero notions of actually running it. After all, with a total of more than 1000 trail runners vying for 140 precious spots on the starting line, my odds were as promising as a popsicle surviving on a summer sidewalk. Plus, my body was nowhere near racing shape. It was more of a pear shape.

In addition, my winter and spring calendar was already scripted: a demanding job, work travel and the final semester of an MBA program, all while trying to remain a committed dad and husband. I would not have the time to log 80-to-100-mile weeks on distant alpine trails. With some luck, I might muster six miles a day on flat, gravel paths around our suburban home.

And wouldn’t you know it—my name was drawn. These days, when you get a precious ticket to run the Hardrock 100, you seize it. I realized I would have to craft an unorthodox training plan to prepare for this beastly race, which climbs a total of 33,000 vertical feet, over technical terrain, mostly above an altitude of 11,000 feet in Colorado’s San Juan Mountains. Inspired by other trail runners with taxing schedules, I pieced together the “The Workingperson’s Guide to Kissing the Rock,” which was built around three cornerstones: intensity, specificity and reality.

Says Jason Koop, Director of Coaching with Carmichael Training Systems and two-time Hardrocker, “If you are crunched for time, focus on the intensity of your workouts versus the overall mileage.” He adds, “Intensity trumps volume because your total workload is going to be higher, and the higher your total workload, the bigger the adaptation.”

Because I tended to doze off in my college science classes, I asked for some clarification from Koop. “Working at high intensity—or at your lactate threshold—will produce the adaptations you need to cope with altitude,” he explains. Basically, he says, it increases your mitochondrial density (the greater the density, the faster and longer athletes can train) and red-blood-cell volume (reds contain hemoglobin, which transports oxygen throughout your body).

In 2013, Boulder-based endurance athlete Bob Africa, 42, put such a plan to the test, when he tackled the Leadman—a ridiculous challenge encompassing the Leadville Marathon, Silver Rush 50-Mile Bike or Run, a 10K race, the Leadville Trail 100-mile Mountain Bike and the Leadville Trail 100 Run in the same summer. Many factors kept him from heavy training, he explains, while rattling off a litany of them: “Running a company, a little girl, turning 40, knee surgery. I needed to change it up.”

For added intensity, Africa embraced the mantra, “Less is more and quality over quantity.” He immersed himself in CrossFit Endurance, a sport-specific off-shoot of the high-intensity training program CrossFit that mixes a running regimen with strength workouts and other CrossFit components to help the runner perform better despite running fewer training miles.

“It got me very fit, mentally and physically,” he explains. In 2013, Africa placed second overall in the Leadman competition. As if that weren’t enough, in 2014, with the same training approach, Africa took on the Leadman again—and won it, even though his longest training run had been just four hours.

2011 Hardrock finisher Ryan Cooper, 40, who lives in Frederick, Maryland, discovered that “intensity is a big factor when you don’t have a lot of time.” Married, with two young girls and a demanding job, Cooper spends two days a week at the gym, focusing on whole-body strengthening, comprising of “super sets” (no breaks between sets). The sets include body-weight and running-specific exercises (i.e. plyometrics) as well as free weights and machines. Cooper can only hit the trails once a week, but credits increased intensity (shorter distances at a faster pace) with getting him through Virginia’s difficult Grindstone 100 in 2014.

Myself, I began mixing in ½-mile, 200-foot-vertical hill repeats, doing 10 reps two to three times a week, pushing my pace into the anaerobic zone for short spells. I also sprinkled in up to five ¼-mile sprints during my morning five-milers.

It’s easy in theory: to run the world’s toughest mountain ultra, you should train on mountains. But what if your nearest mountain is a mole hill? The truth is, a very small percentage of the world lives near climbs as epic as those found at the Hardrock 100, so you must be creative.

Koop preaches to “simply get in all the vertical you can—it’s almost impossible to do too much vertical in preparation for a race like Hardrock.” Trails and roads can be “jerry-rigged” to make the vertical gain add up. As a rule of thumb, the vertical gain for your training should mimic the vertical ascent/descent per mile of your target race.

“Also, you can increase the intensity of a workout by adding a reasonable amount of weight (up to 10 pounds) to your pack,” he says.

Downtown Denver, where I work, is fairly flat. So, consistent with Koop’s advice, I snuck in vertical by taking the stairs every day. On lunchtime runs, I sought out high-rise hotels (thanks, Denver Hyatt!) and even parking garages for more simulated mountain climbing.

Our company’s nearby workout facility had treadmills that tilted to a 15-percent uphill grade. To add to my weekly vertical tally, I would hike for an hour at a time on them over lunch breaks, sometimes answering emails on my phone at the same time.

Despite your dreams of running with the big dogs, at some point, you should set realistic expectations and goals.

Colorado-based coach Cindy Stonesmith (www.ultrarunnertraining.com), who has coached ultra athletes to the finish of some of the world’s most difficult races, recommends “training races” as checkpoints leading up to your target race—preferably scheduled in increasing distance and difficulty. When training for Hardrock, for example, the online consensus seems to be that the runner should line up mountainous trail races building up from marathon distance to 50K up to 50 miles.

“If you’re sore or unable to recovery quickly from one of these stepping stone races,” says Stonesmith, “it’s a good indicator that your training isn’t matching your race goals.”

What should you do if your body says you’re not where you’d like to be? “Set a pace and heart-rate plan,” says Stonesmith. “By not going out too fast and sticking to overall time goal pace, you’ll ensure that you’re running in the right energy system that will take you to the finish line still smiling.”

In the 2014 Hardrock 100, I did not have a script for target heart rates (although it might have helped). Instead, I forced myself to walk early and often. I made sure that my hiking pace was easy enough to allow conversation with others around me. This required that I check my competitive urges at the door, but it also helped me to lay a foundation for a solid latter part of the race and, most importantly, a finisher’s medal. At Mile 27, I was around 75th place, already far behind even some mid-packers. When I crossed the finish and kissed the hallowed Hardrock, I was in 25th place and able to run.

Acclimatize … While You Sleep

A top reason many runners don’t see the finish line of the Hardrock 100—or many other mountain ultras—is that they are unprepared for the high altitude.

The optimal way to prepare is to live in the mountains or arrive at altitude a few weeks before the race—not options for most of us.

Luckily, there is an option that gives altitude-challenged athletes a fighting chance at mountain ultras—altitude sleeping chambers. Three weeks before my Hardrock race, I acquired a Hypoxico Altitude Training Systems model (www.hypoxico.com).

These tents form an envelope around your bed (adjustable according to bed size). A side unit the size of Star Wars’ R2-D2 pumps thin air into the tent and can be set to simulate altitudes up to 12,500 feet (an adapter lets you set it even higher).

The Idiot’s Guide to the science behind these chambers is that they amplify pulmonary oxygen absorption and enhance oxygen transportation through the body, thereby making your body more efficient up high.

During my “tent” time, I was able to sleep at the equivalent of 11,000 feet. My experience is purely anecdotal, but despite my low-mileage training and limited time spent above 9,000 feet prior to the big day, I enjoyed less discomfort at higher altitudes than in three previous Hardrock finishes.

It also appears that this is not merely a test study of one mediocre runner (me). Eventual 2014 Hardrock champion and record-setter Kilian Jornet utilized a Hypoxico tent. 2012 Hardrock champ Hal Koerner also slept in an altitude tent for weeks leading up to the race, and an increasing number of hopeful Hardrockers and ultra aspirants are following suit.

Despite not running more than 45 miles per week at his training peak, Garett Graubins managed to complete the 2014 Hardrock 100 in under 36 hours. This article originally appeared in our March 2015 issue.