Urban trail runners may yearn to escape into the wild, but the prospect of wildlife encounters can be unsettling for those who haven’t spent much time in rugged places. So Trail Runner talked to two experts—Steve Kozlowski, a wildlife biologist with Colorado’s White River National Forest, and Travis Wyman, a wildlife biological technician with Yellowstone National Park—about how trail runners can minimize the risk of negative encounters with bears, mountain lions, moose and other wild things. 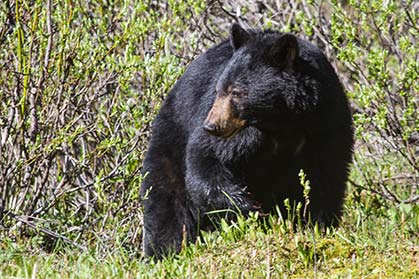 Few animals instill as much fear in backcountry users as bears. But the occasional well-publicized mauling notwithstanding, fatal bear attacks are actually quite rare.

The two North American bear species that runners south of the Arctic Circle may come across are black bears and grizzly bears. Black bears tend to be more timid around humans than grizzlies, so it’s important to be able to identify each species.

“Black bears aren’t always black,” says Kozlowski. “Black bears can vary from black to light brown, so the color is not a good way to distinguish.”

Instead, Kozlowski suggests, go by the bear’s face. Black bears are more canine in appearance, with an elongated snout that extends straight forward, and larger, pointier ears than grizzlies. Grizzlies have a flatter, rounder face; small, round ears; a distinctive shoulder hump, visible when walking; and gray-tipped fur that gives them their “grizzled” appearance. 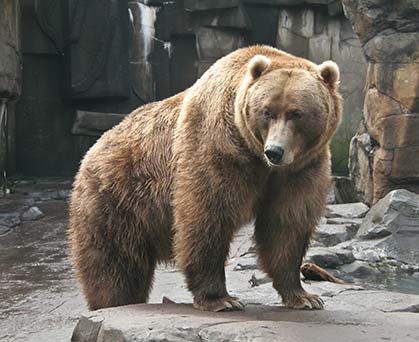 Where: Black bears, the more common of the two, can be found in the Northeast, the Appalachian Mountains, the Rocky Mountains, the Pacific Northwest, Alaska and most of Canada. In the continental U.S., grizzly habitat is limited to parts of Wyoming, Montana, Idaho and Washington State, especially the Greater Yellowstone Ecosystem. Grizzlies also roam Alaska and western Canada.

>Make Noise. Talking, clapping or singing on the trail, especially before blind corners, can alert a bear to your presence. Usually, the animal will amble off before you arrive.

>Stick together. Travel in groups of two or more, when possible. Greater numbers make more noise, and provide a further disincentive for bears to attack—as Wyman puts it, “There’s more of you to combat.”

>Avoid aggression. If you do see a bear, says Wyman, “The first thing, whether it sees you or not, is to stop.” Slowly back away while speaking in a nonaggressive tone to make your presence known, and take a wide detour. Calmly moving out of the bear’s space should demonstrate that you are not a threat.

>Play dead—only if attacked. If the bear does attack, drop to the ground, cover your neck and play dead. “Usually what [attacking] bears are doing is subduing a perceived threat,” says Wyman, and fighting back can intensify an animal’s defensive reaction. (The exception to this is when a black bear is stalking you as prey; more on that below.)

>Take stock of the situation. Bears may behave differently in certain circumstances. Surprising a bear, especially a mother with cubs, raises the likelihood that the animal will lash out defensively. And in rare cases, black bears have been known to prey on humans. (Such behavior has not been observed in grizzlies.) If a bear is stalking you, circling you, checking you out curiously or otherwise engaging you in an odd way, that may be a sign it considers you prey. Then, and only then, should you fight back. “Be super aggressive,” Wyman says, so the bear knows you won’t make an easy snack.

>Carry bear spray—and know how to use it. Bear spray—a highly concentrated form of pepper spray—has been shown to be highly effective in deterring bear attacks. If you choose to run with bear spray, keep it easily accessible. Wyman says some Yellowstone-area runners affix a canister to their hip belt, or carry one in their hand.

If charged by a bear, Wyman says, “Give it one quick blast” of spray when it gets within about 30 feet. Aim low to the ground, at the bear’s face, timing it so that the bear runs straight into the spray. If it continues to charge, empty the canister. 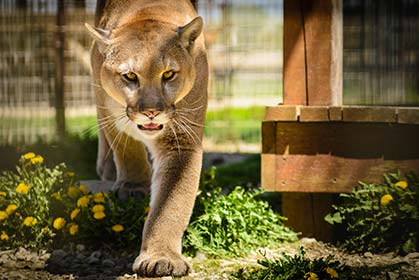 Mountain lions, also known as cougars or pumas, are famously stealthy; one has even been living in Hollywood’s Griffith Park since at least 2012, seemingly unbeknownst to the many humans who recreate in the park.

Most cougars will avoid humans, and if they don’t want to be seen, they probably won’t be. “They see you; you don’t see them,” says Kozlowski. “They’re pretty secretive.” In rare cases, though, mountain lions may stalk humans as prey.

When: Like many runners, these large cats are crepuscular—most active in the twilight hours of dusk and dawn—so if you’re running in cougar country, be aware of any reported sightings nearby, and keep your eyes and ears open on morning and evening runs.

Where: “Mountain lion” is something of a misnomer. Cougars can inhabit a variety of North American environments, including forests and marshes. Runners should take particular care in rocky, shrubby country where deer are common and in suburban areas that abut wilder regions, like the foothills of Los Angeles. Cougars’ current range extends from the Pacific as far east as Texas and the western edge of the Great Plains; a small indigenous population has also held on in the Florida swamps. Feats of feline ultraendurance are not unknown, though—cougar sightings have been reported in the Midwest and Appalachia, and one South Dakota cat even traveled 1500 miles before being killed on a Connecticut highway.

>Stay out in the open. Avoid game trails that lead into dark, narrow draws, where mountain lions sometimes ambush prey.

>Scan the ground. If you see a fresh kill or deer bones, you may have stumbled into a favored feeding spot; leave the area quickly.

>Get big. If a mountain lion is stalking you, make yourself appear as large and intimidating as possible. Says Kozlowski, “Stand tall, [but] do not threaten it unless it threatens you. Pick up a branch and wave it around. Shout with confidence”—not a crazy shriek, but “reprimanding, like you’re in charge,” as you would speak to a misbehaving dog.

>Don’t run. As with a bear, never run away from a mountain lion. Because it is a predator, “That will really turn it on,” Wyman says. “[Running] increases your chance of being attacked tenfold.”

>Don’t be easy prey. If a mountain lion attacks, it’s probably preying on you. “Fight like your life depends on it,” advises Wyman. 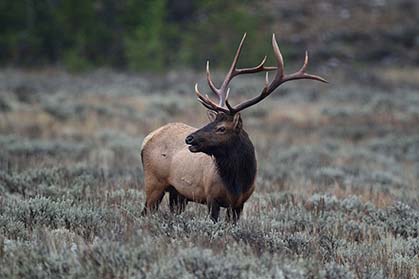 We’re not talking Bambi and Bullwinkle and domestic cattle here. These plant-eaters seem docile and friendly, but can do serious damage if provoked: Yellowstone’s bison population is responsible for more annual injuries to park visitors than are bears.

Elk are the smallest and most skittish of the three, but elk cows can get aggressive during calving season. In Yellowstone, says Wyman, elk cows come to park towns like Mammoth Hot Springs and stow their newborn calves in the bushes; unaware visitors have been charged by protective mothers. Moose, though rarer than elk, are more dangerous: at up to 1,800 pounds, they can do more damage, and are far less likely to run away.

Elk and moose attack by rearing up and bringing their hooves, which can reach a human’s head or chest, down hard. “They basically try to run you over,” Kozlowski says.

In addition to calving season, elk and moose can be dangerous during the rut, when bulls spar for access to mates; getting between a male and rutting female is inadvisable, to say the least. 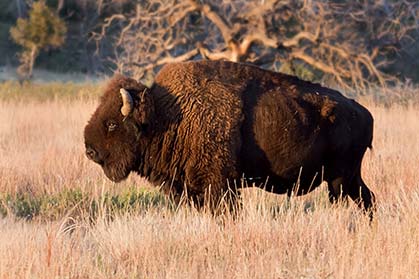 Bison are the surprisingly agile linebackers of the American prairie, 2,000-pound masses of flesh that can sprint 40 miles an hour. When challenged, they stand their ground—they’re the biggest land mammals on the continent—and have been known to charge humans who get too close. As with members of the deer family, hormonal bison bulls are particularly aggressive during the rut.

When: Elk and moose calve in late spring and rut in early fall. (The exact times vary by location.) The Yellowstone bison calving occurs in late April-early May, and the rut in mid- to late summer.

Where: Elk populations are concentrated in the Mountain West and Pacific Northwest. Moose are found in most of Canada and Alaska, as well as the interior Northwest, the upper Midwest and the Northeast. Bison are mostly limited to ranches and preserves; runners are most likely to encounter them in Yellowstone National Park. 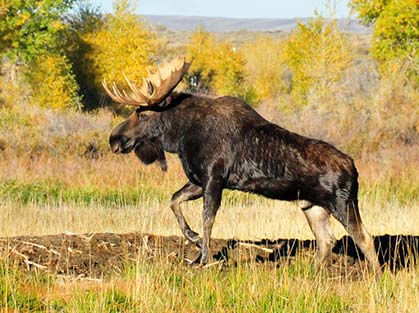 >Stay back. Yellowstone National Park regulations recommend a distance of at least 25 yards for non-ursine wildlife, including bison; any closer, and the animal could feel threatened. While elk are more likely to run off, moose and especially bison tend to stand their ground.

>Get out of there. If challenged or charged by one of these animals, run away. Seek higher ground, and try to put some cover, like trees or rocks, between you and the aggressor. “It’s not a predator thing like a bear,” says Wyman. “It’s ‘I want you to get out of here.’” Fleeing from an elk, moose or bison can help defuse a tense situation, rather than exacerbating the danger as it would with a bear or cougar. 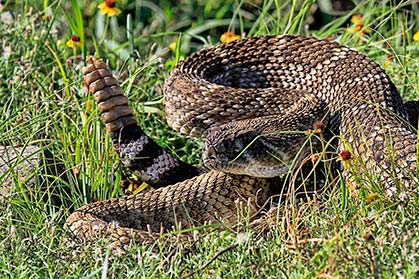 Most American snakes are harmless, but a few varieties carry potentially lethal venom, rattlesnakes being the most common. Though species of rattler are found all over the U.S., runners are most likely to encounter them on trails in the Southwest.

Rattlesnakes have a triangular head and a jointed rattle at the end of their tail, which they vibrate as a warning. Often, snakes that look like rattlers are actually harmless bull snakes, says Kozlowski. Though they don’t have rattles, bull snakes shake their tails and coil up in imitation of rattlers to scare off potential threats.

>Look down. Rattlesnakes won’t attack humans unprovoked, but will act defensively if threatened. Watch out for snakes on the trail, and give them a wide berth. Kozlowski recommends at least five feet, outside of their strike zone.

>When in doubt, steer clear. Distinguishing bulls from rattlers can be tough for nonexperts, so it’s best to stay away from anything that shakes its tail at you.

>Tread softly, and forget the big stick. Don’t prod a rattlesnake with a stick; it won’t move, but will get angry and possibly attack.

Meet The Runners Making Space For Queer Athletes On The Trails