A female trail running in the Dolomite mountains of Italy.

In trail- and ultrarunning parlance, I’m what’s known as a “flatlander.”

Cursed by low elevation, lack of vert and between four and eight months of winter each year, my home base of Minneapolis is hardly conducive to training for high-altitude races with relentless climbs and descents, let alone a race like the Western States 100, where those two factors are compounded by scorching heat.

Yet Scott Jurek, now 41, famously trained for his first Western States Endurance Run in the frigid northern reaches—and low-lying elevation—of the upper Midwest. (He won that race, then the six Western States that followed.) Countless runners from all over the country train for and complete races in conditions far different than those of their “home” trails, and many even compete at a high level.

We asked a few of them how to prepare for races with altitude, elevation change, heat or technical terrain—or, failing that, how to best cope with those challenges come race day—in your own backyard, when your backyard doesn’t have all the trappings of an epic race course.

Even the best-laid training plans can be undone when your goal race is several thousand feet higher than where you train. Lower oxygen levels won’t let you function at your highest level, although the fitter you are, the better you’ll handle it. So don’t neglect your training.

The best way to prepare for altitude is to spend time at altitude, or simulating it. If your job and family situation allows for it, travel to the race location or an area with similar elevation a week or two ahead of time; spending a week at altitude a month or so in advance will also help your preparation. If you are single or have an extremely accommodating partner, and can afford it, sleeping in an altitude tent will let you simulate sleeping at altitude if you can’t actually get up high. In other words, the more time you can spend at altitude, the better—to a point.

If you can only get to the race location a few days, rather than a week or more, in advance, don’t. Show up the night before, says Ian Sharman, 34, who came from the near-sea-level training base of Walnut Creek, California, to win the 2013 Leadville Trail 100, a race with a minimum elevation of 9,200 feet. He was also third at that race in 2014.

“Your body won’t be adapted to altitude, but won’t have a chance to feel sick from the initial exposure to altitude [either],” he says of showing up as soon as possible to the race start. “Generally, [arriving two to six days in advance] is the sweet spot for feeling bad on race day, where your body reacts negatively to being at altitude but hasn’t had time to adapt and create many more red blood cells.”

Come race day, don’t go out too hard—you’ll pay for it worse than usual, says David Roche, 26, of Sunnyvale, California. Roche and his wife, Megan, 24, train near sea level in California’s Bay Area but both won the 2014 Jupiter Peak Steeplechase in Utah, which tops out at over 10,000 feet.

“Avoid redlining early in the race,” he says. “At sea level, you can go over that line and come back, but at altitude, you have one max effort.”

“I think two-thirds of an ounce of fluids per pound of body weight is a good rule of thumb,” says Roche; he opens and closes each day with 16 ounces of water or energy drink, and then downs 32 ounces of fluids after a run and 32 ounces at some other point in the day.

For better or for worse, staying hydrated at altitude also means refraining from a pre-race beer, even if that’s your routine.

“Any alcohol consumption may want to wait until post race,” Roche says. “High-altitude beers come with an extra-strong kick that is absolutely delightful, so long as you aren’t maxing out your heart rate the next morning.”

There is one additional tip for simulating altitude, which I gleaned from Jurek himself at a book signing: run in humidity. According to him, it will make you suck wind, and work a lot harder to run the same pace or distance—just like running in thin air. 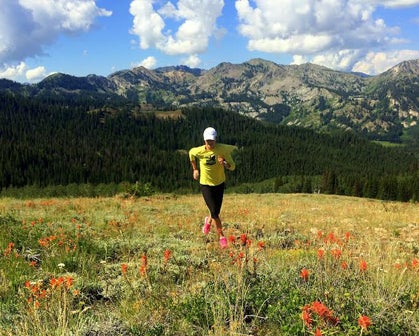 At mile five of the 2013 North Face Endurance Challenge (TNF) 50 Mile in San Francisco, I knew I was in for a long day. After one long climb and one long descent, my quads felt like I had spent the morning doing Olympic lifting reps. By mile 40, I was wincing and running gingerly on the downhills, which would not relent until the very end of the race.

We have hills in Minnesota, but they tend to be steep and short, requiring quick bursts of strength and strong lungs rather than the muscular endurance a long, gradual slog in the mountains or the Marin Headlands will demand. How can we flatlanders prevent our legs from turning to rubber as we crest climbs, and from being pulverized as we bomb back down?

I asked my neighbor Chris Lundstrom, 39, who placed third at the TNF 50 in 2009 and seventh in 2010. (He is also working toward his Ph.D. in kinesiology and holds a USA Track & Field coaching certification.) For uphills, he says, treadmills—as much as you might despise them—allow you to simulate almost any incline you’ll encounter in a race, however steep or long the climb.

“The inclines should mimic the course that you are training for, so if it’s a long gradual one, you can go at a constant incline, or if it’s more irregular, you can increase and decrease the incline each minute,” he says. “For most mountain courses, I recommend inclines of 10-15%, with some segments at lesser inclines interspersed.” He recommends sets of long treadmill repeats, such as three 10-minute repeats with three to five minutes of recovery in between.

RELATED: Training To Be A Strong Downhill Runner

To prepare your legs for quad-shredding descents, Lundstrom says eccentric overload training will mimic the eccentric contractions your quads and calves experience on downhills, when your musculature descends into chaos. “The muscle is contracting as it lengthens, absorbing the impact of landing, which can be much greater running downhill,” he says. “Eccentric contractions cause more muscle damage than concentric contractions, so that is why the downhills are often what get people in trouble.”

He recommends three types of exercises for eccentric overload training. First, strength training that focuses on the slow, eccentric phase of the lift—usually the descent. “An example would be a leg press where you lift the leg to a two count and lower it to a ten count,” he says.

Second, plyometric training, which targets the muscles most prone to damage during downhill running. “This includes repeated jumps, bounds and hops at maximal effort and velocity, with as little time spent on the ground as possible,” Lundstrom says. “Start with a few exercises, such as squat jumps, single leg forward hops, and alternate leg bounding, with just a few steps. You can add exercises and reps as you grow accustomed to the workouts.”

Third, fast downhill running, for however long you can manage it. “While a flatlander may not be able to find the very long downhills you find in the mountains, most people have access to a hill that takes at least a minute or two to run down, says Lundstrom. “Do downhill repeats that focus on good form that minimizes braking, but also on faster pace. The faster you go the more stress you are putting on your legs, so begin cautiously and add speed and volume of downhill running over a period of weeks or months.”

If you’re training for a race in the spring or early summer, chances are you’ll be logging a lot of miles in temperatures colder than those you’ll see on race day. Some races, like Western States, are so notoriously hot in the middle of the day that some preparation for heat is necessary for almost everyone.

Sharman’s Bay Area base usually has a temperate climate—great for running comfortably day in and day out, but not ideal for preparing to race 100 miles in 100-degree heat. Yet Sharman has placed as high as fourth at Western States, and was fourth in 2013, the second-hottest year on record.

He says the key is to acclimate your body to the sort of heat it will face while running—and his method is sure to get the attention of your neighbors.

“The best way to do this is to run in the hottest part of the day and wear multiple layers of clothing, covering as much skin as possible,” Sharman says. “Hoodies are good options and the aim is to get really sweaty and uncomfortable to force your body to adapt to extremely hot conditions.”

If that’s just too much for you, he says, spending time in the heat of a sauna or something similar can also help—just not as much as actually running while hot. And even if you live in a cold, snowbound state, there are usually enough warm-to-hot days before a late spring or early summer race to start training your body for the heat—you’ll just have to avoid the temptation to spoil yourself by running early or late in the day, when temperatures are more pleasant.

Even if you aren’t training for a particularly hot race, fitting in some heat training can have benefits for your all-around fitness. For one thing, it will teach your body to sweat better, enabling it to better regulate heat.

RELATED: An Expert Training Plan For Your First 50K

What if the race for which you’re training is on trails replete with rocks and roots, where getting into a rhythm is a pipe dream and any attempts to look at the scenery will likely end in a faceplant? Fine, if you can regularly train on trails like that to hone your foot-eye coordination and your sense of how to attack the terrain. But what if you can’t?

“We train mostly on Bay Area trails, which any Italian or Central Pennsylvanian trail runner would consider roads through pretty trees,” says Megan Roche, who, along with her husband, David, has won races all over the country, on a variety of terrain.

To prepare for more technical offerings, she says, she and David do several things as much as possible. First? “We hike together,” she says. “Being fast is the most important thing, so it’s okay to run on roads or buffed-out trails, but there are so many little things that need to get strengthened for more technical races. If we go on an epic hike and follow our puppy’s line, we’re bound to get into just the right amount of trouble to prepare for race day.”

Second, Roche says, they do some maintenance off the trails, since running on more technical terrain can require using ancillary and supportive muscles in your legs and core that smooth running alone might not activate or strengthen. “We do lunges and squats, and we take the stairs,” she explains. “I think the best way to prepare for a 40% grade is to keep your legs strong.”

And come race day? “In races, it’s essential to believe in yourself,” Roche says. “A rocky field might seem unrunable, but if you just go for it, it almost always works out. And if it doesn’t, that makes for a really good story over post-race IPA.”

Strong Downhills Late in Races May Determine the Fastest Finishers