How to avoid heat-induced illnesses 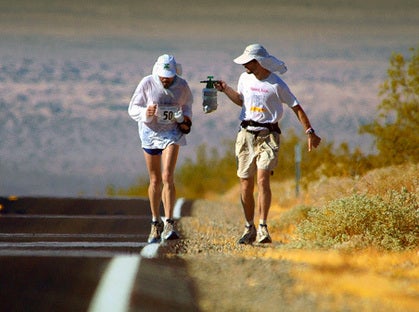 On an 86-degree day in Fort Benning, Georgia, sports-medicine doctor Wade Lillegard was watching military troops train when an 18-year-old recruit suddenly crumpled during a five-mile run. The young man was slurring his speech and not sweating though his temperature was 108 degrees. Suffering a heat stroke, he lapsed into a coma, awakening three days later with failing liver and kidneys and damage to his hypothalamus, a part of the brain that regulates body temperature and sweat rate. The soldier recovered but will remain more susceptible to heat illness.

In addition to heat stroke, which can not only end your race, but can cause permanent damage or even death, are less serious conditions such as cramps, dehydration and heat exhaustion.

Running in hot weather is not only uncomfortable, it places extraordinary stress on the cardiovascular system, because blood is directed away from the internal organs to working muscles and the skin’s surface, drawing excess heat away from the core and outside the body. “The body has competing goals [cooling you down or moving you forward], so it prioritizes,” says Lillegard. As a result, your heart rate increases, but your aerobic capacity decreases.

Humidity compounds heat’s effects on your performance level, making evaporative cooling (when sweat evaporates and cools the body) less efficient because evaporation cannot occur quickly enough to dissipate excess body heat. Consequently, the outside temperature feels even hotter than it actually is. And while heavy sweating is a sign of a healthy thermoregulatory system, losing large amounts of water increases your risk of dehydration, a major contributor to heat illness among runners.

Replace What You Lose

Create a hydration schedule to replace the water and electrolytes lost through sweating while running. “I drink one to two 20-ounce bottles of water or electrolyte drink like nuun (www.nuun.com) an hour, taking small sips every two minutes,” says Lisa Smith-Batchen, coach and two-time winner of the 135-mile Badwater Ultramarathon in Death Valley, California. “And if it gets really hot, I take two or three Endurolyte capsules (www.hammernutrition.com) or one SaltStick (www.SaltStick.com) an hour on top of that.”

Smith-Batchen warns that heat can render your favorite food and drinks unappetizing, so train your stomach to tolerate fuel with hot-weather training runs. And if stomach cramps or nausea set in, slow your pace and up your electrolyte and water intake.

While it is possible to adapt to hot climes (after about eight days the thermoregulatory system increases sweat production), no amount of acclimation, e.g. training in a sauna or under heavy clothing layers, will make you immune to heat’s energy-sapping effects.

The best line of defense is avoidance. Harvey plans her team’s workouts to miss the hottest time of day, when the mercury often hits the 90s. “We do tempo work or intervals in the morning or on trails under the trees,” she says.

If they must train in extreme heat, her athletes reduce the workout intensity (staying well below their maximum heart rates), without compromising the workout’s quality since running slower in hot weather produces the same fitness gains as running faster in cool conditions. Your body composition, age, mental toughness and general conditioning all play a role in how much you should reduce running intensity, though Lillegard suggests a minimum 25-percent reduction. “If you’re running at a perceived exertion of moderately hard, meaning you can carry on a conversation, then you’re in a safe heart-rate zone,” he says.

In Badwater’s 120-degree heat, Smith-Batchen stays at or below 80 percent of her maximum heart rate. “I’ve made the mistake of running too fast in the heat of the day, only to be exhausted later in the race when the sun goes down and I should be able to speed up,” she says. “So my hot-weather race motto is, `Go slow to go fast!'”

Tips For Beating the Heat

:: Pre-hydrate before a hot run, consuming 16 ounces of electrolyte sports drink two hours before your run and another eight to 16 ounces 15 minutes before starting.

:: Place baggies of ice under your hat and inside your clothes near major arteries (jogbra and shorts).

:: Suck on an ice cube to prevent parched mouth.

:: Occasionally douse yourself with water (as long as it’s not your drinking water). In a race, have a crew member spray you with water.

:: Wear a white or light-colored polyester or other sweat-wicking shirt [see Trail Tested, page 66 for a review of sun-protective shirts].

:: Wear an ice bandana and a light-colored, sweat-wicking hat with visor and neck flap.

HEAT EXHAUSTION is characterized by profuse sweating, nausea (and possibly vomiting), weak legs, fatigue, rapid pulse, cramps, lightheadedness and/or headache. You may also experience cold skin and goose bumps, though your body temperature is 100 to 104 degrees. Stop running immediately, seek shade and medical attention, elevate your feet above your heart, loosen any tight clothing and consume large amounts of electrolyte drinks. Avoid further heat exposure for at least 24 to 48 hours.

HEAT STROKE. If warning signs of heat exhaustion are ignored, the body eventually loses the ability to cool itself altogether and the condition evolves into heat stroke. The symptoms are similar to those of heat exhaustion but quickly progress to include bizarre behavior, fuzzy thinking, convulsions, seizures or even coma. At this stage, the body temperature is 104 or higher but sweating has stopped. Emergency treatment involves getting out of sun, immersion in cool water and receiving intravenous fluids. Further medical attention at a hospital is critical to preventing life-threatening and permanent muscle, liver and kidney damage.

The Difference Between Zero-Sugar and Electrolyte Sports Drinks