Grab a GPS and go geocaching 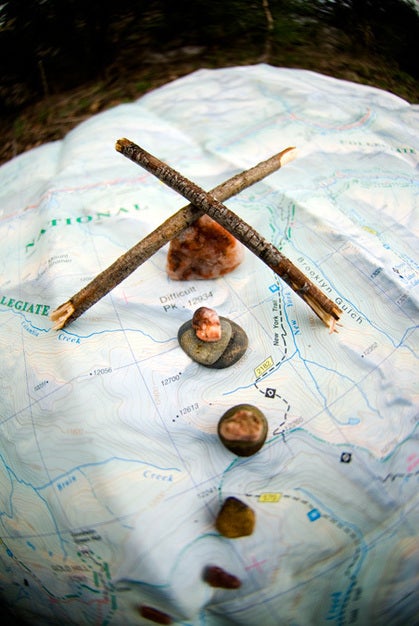 Annie Love, 29, runs briskly along her favorite loop trail around Seattle’s Green Lake then suddenly veers off in the direction the global positioning system (GPS) in her hand is indicating. She’s hot on the trail of GC180ZE, a “geocache” hidden somewhere in Woodland Park and one of almost 6000 in the city. Love heads south until she reaches an upright dead tree. Bingo! She digs through a pile of leaves to find a small box, signs the tiny log book inside, replaces the container and runs off in search of the next hidden treasure.

“I’ve discovered some of my favorite urban trails through geocaching,” says Love.

A high-tech version of hide and seek, geocaching involves logging onto one of the sport’s websites, such as www.geocaching.com, and searching by zip code or region the location of local caches hidden by other “geocachers” (anyone who joins the online community and searches for or hides geocaches, or “caches” for short). Select a single or string of caches along a trail or scattered throughout a park and download their GPS coordinates (longitude and latitude) to your handheld GPS receiver. Then lace up your running shoes and follow the receiver’s directions to those locations to uncover the hidden treasure.

In its simplest form, a cache is a paper scroll to which you add your name— a geocacher’s “I was here” log book. Traditionally, a cache is a Tupperware container or ammo can holding random items such as a Rubik’s cube, pocketknife, gift certificate or even money. Some geocachers take delight in constructing camouflaged containers that blend into the environment, such as a hollowed-out pinecone, false sprinkler or fake rock.

Geocaching was created in May 2000, after the United States government opened 24 satellite channels (used for GPS navigation) to the public. Computer consultant Dave Ulmer placed a black bucket in the woods outside Portland, then posted the bucket’s coordinates online and announced the challenge. A few days later two people navigated their way to the bucket, making it the world’s first geocache.

“We estimate two to three million active geocachers worldwide with the majority in the U.S. and Canada,” says Shauna Maggs, director of marketing for the sport’s leading website, www.geocaching.com, which has information on over 500,000 caches.

Personal trainer and adventure racer Kim Kavasch of Albuquerque, New Mexico, sharpens her orienteering skills (such as reading land features and navigating with topographic maps) while training in the Sandia foothills. “Running down geocaches makes a day of training more fun and leaves you exhausted and exhilarated,” she says.

Jim Kuiper of Downers Grove, Illinois, hides as well as seeks, having placed 16 caches around the state. “Matching running with geocaching was inevitable for me,” says the avid trail runner and geographic-information systems technician. Since GPS coordinates provide only distance and direction from your location, Kuiper studies aerial photos or topographic maps for cliffs and rivers that might obstruct his route. “And I try to be ready for bushwhacking and hazards such as poison ivy,” he says.

Geocaching gives Scott Crellin’s running workouts a destination-based purpose. “I go farther and faster to grab another cache,” says Crellin, who typically finds 10 to 15 caches during a 15-mile run near his home in San Diego, California. He once located 31 caches over 14 miles. “I look at maps online for strings of caches stretched along a route long enough to make a good run,” he says.

He and other runners carry trinkets like mini first-aid kits, batteries or foreign currency to trade, with the hope of making the next geocacher opening the container say, “Cool!”

GET THE GEAR. Basic, easy-to-use handheld GPS receivers begin at $100. Those with additional features like an electronic compass, topographic maps, extra memory or enhanced reception, range from $400 to $1000. GPS watches, like the Garmin Forerunner, have many of these features, although you must manually enter data, which can be time consuming.

Visit Navicache.com, Terra-chacing.com or website for your state to find listings of local caches—you may discover a cache (or many) within a mile of your house. Download the geocache’s GPS coordinates (called a waypoint) and cache notes to your handheld receiver and plan your route.

GET RUNNING. Follow the receiver’s directional arrow and watch the distance between you and the cache decrease as you close in. You can make it easier by decrypting additional hints posted on geocaching websites, but why spoil the hunt?

GET TO THE GOODS. Remember that GPS can only take you so far. “Within 30 feet, stop looking at the screen and start searching for the cache,” says Mark Collins, of Beaverton, Oregon. He recently found his 1450th cache and aspires to find them in all 48 contiguous states. Look for rock piles or a stump that could conceal a cache, but never underestimate some geocachers’ ingeniousness to make it as difficult as possible.

GO BY THE RULES. Sign the log, but don’t move the cache. And if you take something, leave something.

Save Time (and Stress) on the Trail with Gaia GPS