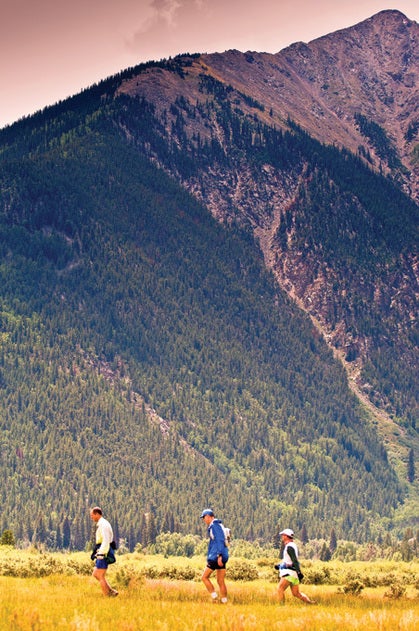 When runners cross the finish line of the Leadville Trail 100, a broad-shouldered beast of a race between 9200 and 12,600 feet in the Colorado Rockies, they receive a medal, hug from Race Director Merilee O’Neal and an escort to the medical tent, just 20 yards away. Inside the army-green canvas tent, it feels like a M.A.S.H. unit. Filthy runners are supine, many wearing oxygen masks and draped with wool blankets. Chunky coughs and soft moans reverberate.

After completing the 2008 race, Joe Kulak, who lives in Oreland, Pennsylvania (elev. 259 feet), registered an 80. Friends helped him over to the oxygen tanks, where he sucked on the facemask for an hour.

In extreme cases, high-altitude pulmonary edema (swelling or fluid accumulation in the lungs) or cerebral edema (fluid in the brain—a malady which may prove fatal) may occur. Fortunately, these circumstances are rare, and nobody has ever died during the race.

Still, high altitude scares away even the most ambitious runners—especially those living at low elevations. But with the proper approach, even runners from New York City or the Bay Area can excel in rarified air—and enjoy the experience.

It’s nearly impossible to dispute the physiological effects of running at altitude, and few people are more qualified to spell them out than Jack Daniels, Ph.D. Daniels is Head Distance Coach at The Center for High Altitude Training at Northern Arizona University. He has coached 31 individual NCAA National Champions and 131 All Americans. He was also named the NCAA Cross Country Coach of the Century and was the altitude consultant for the USATF team at the 1968 Olympic Games in Mexico City (elev. 7349 feet).

There is one cold, hard, non-negotiable truth to high-altitude mountain running: there is no substitute for training high. “Outside of running on a treadmill in a pressure chamber,” says Daniels, “there’s not much you can do [at sea level].” But don’t be discouraged—there are training and tactical options that can make a difference.

“The main issue is the higher you go the lower the barometric pressure,” says Daniels. “Each liter of blood carries less oxygen than at sea level, and the amount of work you can do is less.”

That is why lower-altitude runners may feel fine early in a race, but fatigue sooner than someone properly acclimatized. And the higher the altitude, the greater the effects.

Between sea level and 2000 feet, there is no difference in athletic performance, explains Daniels. In fact, the difference between running at 2000 feet and 5000 feet is not major, either, and that is welcome news to runners eyeing races in lower peaks, such as the Appalachians.

This accounts for many stories of runners performing moderately well up to a certain altitude, then hitting a wall. When they drop below that threshold, their energy returns.

Janet Hamilton, a registered clinical exercise physiologist near Atlanta, has also studied the effects of high altitude on athletes. “If you can’t get to altitude several months in advance — that is, if you have a job and a life,” she says, “your next-best choice is to run the event within 24 hours of arriving.”

Here’s why. At altitude, there is less oxygen being bound to the hemoglobin in red blood cells. When your body recognizes this, its response is to hyperventilate—breathe more—in an attempt to collect more oxygen. Its next effort is “hemo-concentration,” where it “dumps” plasma (essentially the fluid portion of your blood). This occurs through the body’s natural fluid loss at altitude.

“That process of hemo-concentration takes a little over 24 hours,” says Hamilton, “And the only way the body can eventually deal with this dilemma is to slow you down.”

While Daniels says there is no direct substitute for training at altitude for a high-altitude race, he offers this advice: “Running in the heat at sea level compares to running at altitude.” He says it taxes the body’s systems, forcing them to become more efficient.

Hamilton concurs: “Training in the heat, your body needs to allocate blood to different areas—to exercising muscles and to the skin for cooling, and starts to retain fluid to make more plasma, which increases your blood volume. That might be an advantage at altitude, since your body actually loses blood volume up high.”

Nearly every coach cautions runners aspiring to high-altitude races to temper their expectations and to train harder than they would for a lower-altitude event. Indeed, athletes who experience the most success at training low and racing high all credit rigorous training programs.

“Do short, hard intervals, such as two-minute hill repeats, to boost your aerobic threshold,” says Doug Bush, a sports coach and founder of www.endurancefactor.com.

Roxanne Zobava, 32, of Atlanta, Georgia, does not fit the profile of a runner who would win the 2008 Inca Trail Marathon in course-record time. It’s not that she lacks talent – she has taken the trail-running community by storm, most recently winning the 2008 Great Eastern Endurance Run 50K in Charlottesville, Virginia. It’s that Zobava lives at low altitude and the 27.5-mile Inca Trail Marathon treads between 8000 and 13,700 feet.

Zobava simply trained extra hard. “I ran 80 to 100 miles weekly and did lots of hill training and stair work,” she says. “I hit steep hills on sections of the Appalachian Trail until I was completely out of breath.”

New Yorker Chip Tilden, 39, also brings intensity to his training while preparing for his annual target race, the Pikes Peak Marathon, a demonic event in Manitou Springs, Colorado, that climbs and descends a total of 12,000 feet and tops out at 14,110 feet.

“I do a lot of Stairmaster training and build up my mileage,” he says, while describing his two main training locales: Central Park and the YMCA. Tilden has completed three straight Pikes Peaks.

So, with the right preparation, even a New Yorker can run to the summit of the country’s most famous peak and then back down. “Fear not the heights,” says Tilden. “It can be intimidating. Go at it with the energy and belief that you can conquer it.”

“I’ll be fine if I arrive four days ahead of time and hike around.”

“Arrive the day before. Run the race. Go home.”

“Don’t tell anybody, but I take Viagra to combat the effects of high altitude.”

“Lightheadedness means the altitude is taking a toll.”

The Optimal Plan to Success

The following is Dr. Jack Daniels’ ultimate high-altitude-race training plan, and mirrors the one his athletes used to prepare for the 1968 Olympic Games in Mexico City’s thin air.

:: Report to altitude at least three weeks in advance and pursue your normal training schedule (i.e. do not cut back and do not take the first week easy). Drink a lot more fluids (high altitudes equate to drier climates). “The first week, you’ll notice two or three pounds of weight loss,” says Daniels. “And it’s all water.”

:: Five or six days before the race, return to low altitude or, better yet, sea level to replenish the body.

:: Re-ascend the day before or day of the race. In 1968, Daniels’ athletes improved their times after going to lower altitude before race day.

Everything You Need To Know About Tempo Runs