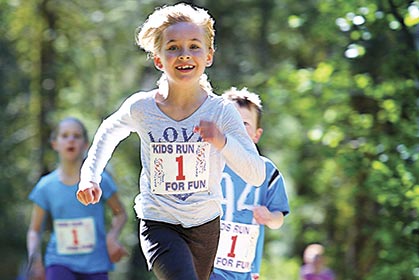 I was lacing up my shoes, moments away from freedom from the kids, when my 8-year-old daughter asked the question: “Can I come with you?”

I hesitated. I had taken her road running, but trails were my escape. Was I ready to give up my “me time”?

On the other hand, I lacked a good reason to have her stay home; our morning schedule was open, and I knew she was capable of at least a short trail run.

With some reluctance, I agreed to my daughter’s company. Once on the trails together, she was wowed by her surroundings and noticed far more than I did. Run with a kid and you’ll discover how much time you spend thinking, thinking, thinking, when you’re on your own. The problem solving can be good, but it’s also refreshing to take a break and see the world through a child’s eyes.

It’s been a couple of years since that first trail run with my daughter, and now, trail running is at the top of my list of family activities. Here’s why.

The Wilderness Is Welcoming

Whether you’re running in the woods or through a meadow, there’s a feeling of privacy that for kids who otherwise don’t want to be seen hanging out with a parent can negate that adolescent issue.

Kids (much like adults!) who have been dragged along on tedious road runs may be far more eager to run on trails. My daughter never complains in the woods, because she’s so happily engrossed in
her surroundings.

Priscilla Nelson, a trail runner and friend of mine from Duxbury, Vermont, has four kids ages 4 to 10. She enjoys trail running with her oldest, Tanum.

“We notice a lot of things,” says Nelson, “[like] leaves or where water’s coming from,” adding that Tanum will stop to pick up things like rocks and bright-colored leaves. They’ll also stop, on occasion, to glimpse wildlife, including toads, deer and fox.

Chris Harges of Fairfax, California, is director of global marketing for Mountain Hardwear and Montrail and an avid mountain biker. He and his 12-year-old daughter, Kate, never considered themselves runners, but, on family hikes, they kept finding themselves running the last mile or so when they were feeling tired and in need of a pick-me-up. Kate enjoyed the excitement of the fast finale and eventually suggested to her dad that they hit the trails running.

“I hated running on roads,” says Chris, “but when you run on trails, you feel like a wolf or a superhero.”

“We like to laugh when we’re on runs,” Kate adds, explaining how the funny stories she and her dad exchange often serve as a welcome distraction on challenging climbs.

A Chance to Connect

I was initially surprised by how much chattier my daughter is on the trails than on the roads. A lot of our road runs are in town with distractions from traffic and street crossings. On the trails, we relax right away and fall into conversation much like I do while running with a friend. When questions come up, I find it easier to respond while trail running than during chore time at home or while in the car.

While Nelson’s youngest three kids are spunky and athletic, they haven’t (yet) shown an interest in trail running. The result is bonus one-on-one time for Nelson and her daughter. They run side by side, when possible, with Tanum setting the pace.

The Nelsons have trail access right out the door of their home. They also explored trails while visiting Utah and Colorado last summer. At a 2013 race up Vail Mountain, the Berry Picker Trail Run, Nelson says her family hiked up to cheer her on at the finish.

How to Get Your Kid Running

The 8-to-12 age range is prime for introducing kids to trail running, since kids this age are not only eager to explore, but also have developed enough physically to sustain running, rather than walking, at least a few miles. If your kid is like a border collie with endless endurance, you can start a little earlier. As kids get older, their schedules get much busier, and they have less time (and often less interest) for trying something new. If you have an older child who has already shown a preference for other sports, remind him or her that trail running makes for great cross training.

2. Train on Your Own Time

If you’re competitive and your child’s pace is slower, do your own workout first and have your run together be cool-down time. With your own workout out of the way, you’ll be a more relaxed running partner.

Keep your first few runs on the short side so you can assess your child’s trail stamina and comfort on varied terrain. It can be tempting to keep going a little farther when all is going well, but it’s better to have kids wanting more than to fade at the mid-point.

Let kids be the lead runner so they can set the pace and see the surroundings rather than your back. Being out front helps kids feel like they have some choice in what they’re doing rather than just following along.

5. Try All Types of Terrain

If you have access to trails with various types of terrain, try exposing your kids to all types and see what they like. Many kids are agile and love rock hopping or jumping over roots. Smooth terrain may be a safe bet initially, but varied terrain may keep kids more engaged.

Theresa Apple, a high-school cross-country coach and director of the Nike Green Mountain Running Camp for teens, teaches her runners to “loop and regroup” upon reaching intersections. Either they turn back to meet others or they wait at the trail junction. Kids are encouraged to survey their surroundings so they recognize the intersections on their return.

7. Plan for the Unexpected

Get in the habit of carrying water and on-the-go food on every run with your child. This is your insurance if you underestimate how long a run will take, and offers flexibility when you’re ready to tack on mileage spontaneously.

Heidi Hill is the author of Fit Family and a freelance writer specializing in stories related to sports, fitness and family. This article originally appeared in our December 2014 issue.

How To Run Faster On Technical Trails

Training To Be A Strong Downhill Runner