How dangerous is running on high-pollution days? 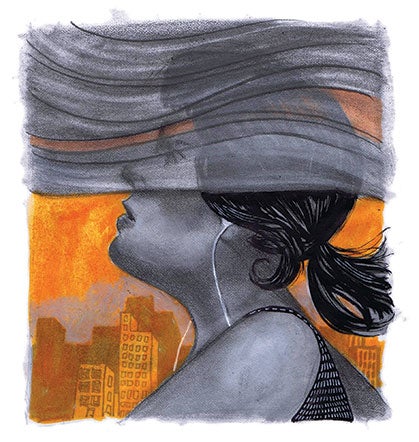 In 2008, then marathon-world-record holder, Haile Gebrselassie of Ethiopia, decided not to run in the Beijing Olympics. Even though he would only be running for just over two hours, Beijing’s air pollution and its attendant risk of long-term damage outweighed the prospect of a probable Olympic Medal.

To run or not to run? This is a question many of us living in the polluted pools of our cities ask ourselves on a daily basis. We’ve been peeing in the pool for so long now that the World Health Organization attributes nearly one-million deaths per year to inhaling polluted air.

In the 1990s, Brigham Young University economics professor C. Arden Pope’s research found that higher levels of tiny particles in the air are associated with increased mortality rates. Air pollution has been shown to worsen respiratory issues, and cause cardiovascular damage (leading to heart attacks, strokes and heart disease) and infants to have lower birth weights.

What Pollutes Our Air?

The atmospheric layer closest to Earth is called the troposphere. It contains the air  we breathe. Human activities, from vehicle exhaust to industrial emissions, create the two biggest concerns for our health: ground- level ozone and particulate matter.

Ground-level ozone occurs when engine and fuel gases in the air react in the presence of heat and sunlight. Ozone levels increase  in cities when the air is still, the sun is bright and the temperature is warm. Ozone is therefore worse in the summer because of the ripe conditions.

Particulate matter is a general term describing microscopic particles floating in the air. The particles are so small they can only be seen with an electron microscope; however, when a lot of them are present, you get a visible blanket of smog, e.g. the kind you see in Salt Lake City during a winter inversion.

When you run you breathe in huge volumes of air—10 to 20 percent more than someone sitting on the couch—exposing you to greater levels of pollutants. The pollution penetrates deep into the lungs, where it creates inflammation and oxidative stress (a harmful byproduct of your cells producing energy), and can contribute to conditions such as asthma and chronic obstructive pulmonary disease. That’s why, during high-pollution summer days, you may hear warnings about not exercising outdoors.

As runners, our heavy breathing is usually done through the mouth, which bypasses the filtering benefits of breathing through the nose. People with conditions such as asthma, cystic fibrosis, chronic lung disease and other respiratory problems will likely be more affected by exercising in polluted air. However, a 2004 review of worldwide pollution studies concluded it affects us all; exercising in low concentrations of pollution was just as bad as simply living (not exercising) in highly polluted areas.

However, Luisa Giles from the Environmental Physiology Lab at the University of British Columbia believes, “The body of research isn’t big enough to make a solid statement either way.” There is also contradictory research that shows the acute effects are possibly lessened if the subject is fit. One recent study found that there could be long-term benefits to exercise, even in pollution, because exercise helps mitigate the inflammatory effects of the toxic air.

Is there a line where the air is so polluted that we should just stay home and not go for a run? “The science doesn’t necessarily tell us if the air pollution is x, then I need  to do y,” says Giles. However, most experts agree that you shouldn’t simply stop running outside, but instead be cautious of running in high-vehicle-traffic areas, using more care as the Air Quality Index increases.

Air on the Right Side | TIPS FOR RUNNING IN SMOG ZONES

Trail runners should avoid highly polluted streets and do what they love—hit the singletrack. The farther you are from the source of the pollution the better the air quality.

If you must run city roads on high-pollution days, consider wearing  a mask.

High ozone-pollution levels require sunlight and heat, so get out early in the day before the ozone rises to harmful levels.