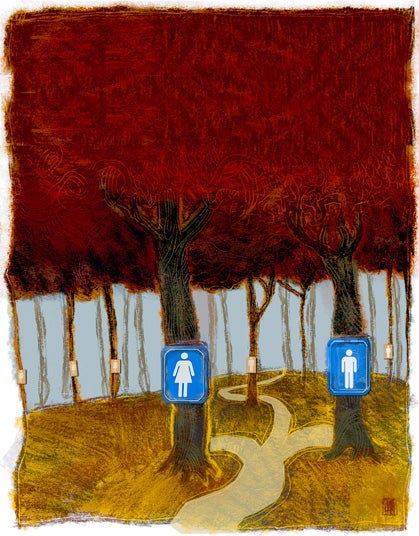 New runners are shocked and repulsed when they hear about it, but seasoned distance runners shrug nonchalantly, immune to embarrassment. They know that relieving themselves publicly and in their clothes is just a fact of the distance runner’s life. Though the practice is less common in races longer than marathons, those racing to the finish line or dueling with a competitor in ultra-distance races are known to forgo seclusion as well. Ultrarunner Krissy Moehl, 30, recalls her first ultra race, the 2000 Chuckanut 50K, where she found herself on course-record pace and needing to urinate: “I came from a track background where every second counts, and I didn’t want to take the time to stop.”

Stepping primly off the trail to do your business in private could cost you at least a minute or two. Multiply that by several stops in a marathon and you can realize the potential time savings. Ladies especially have even more to lose—they’ve got to pop a squat on exhausted legs. And although men can just turn their backs and take aim, that doesn’t stop many of them from keeping their pace and relieving themselves in their running briefs.

Elite runner Jane Wiebe, 50, of Homer, Alaska, recalls urinating during the 1979 Honolulu Marathon, her first win. “I needed to pee and it was pouring rain, so it seemed harmless enough, but it was very, very difficult to get my body to go along with the idea of peeing while running,” says Wiebe. “I did accomplish it eventually, and won the race, which led to numerous invitations that led to the apex of my marathon career.” Wiebe went on to win, among others, the Deseret News, Emerald City (twice) and Stockholm marathons, and placed sixth in Boston and second in Tokyo.
Going the Distance

Ultrarunners usually have enough time to find a bush, and because races can last 24 hours or more it’s best that they do stop during the earlier parts of a race. “Urine changes the pH of skin,” says Mayo Clinic urologist Christopher Wolter. “It breaks down the stratum corium—the most superficial layer of skin—and leads to chafing.” When urine dries, it leaves behind byproducts that sweat or rain don’t, and these can cause a dermatitis reaction, especially if your skin cracks.

Therefore, Wolter cautions against an ultra-distance cycle of wet-dry-wet-dry. Instead, save the shorts wetting for those last miles. Indeed, after peeing during her first ultra, Moehl asserts, “Never again! The shower after that race was the most painful ever. The chafing that the wet shorts caused was unbelievable.”

If you’re apprehensive about the practice but serious enough about your running to give it a try, here are few tips to make that wet spot less noticeable—and painful:

If you’re a trail runner in a shorter race, you have an advantage over road runners in the public urination department—privacy. You’re not likely to encounter a throng of fans spanning your entire race, like at the Boston Marathon. But if you are caught in the act, just continue running with pride. After all, you’ve just proven yourself to be a hardcore distance runner, one that stops for nothing—not even nature’s call.

If you’re running a 50K or longer, chances are you’ll need to relieve more than just your bladder. But you’ll need to pay more attention to how you dispose of your waste, since fecal matter is more toxic, and thus less environmentally unfriendly, than urine.

:: Always thoroughly bury your waste at least 200 feet away from any water source in a “cat-hole,” a hole six to eight inches deep; simply use a sharp rock or the heel of your shoe to dig it. In arid lands, avoid washes and dig your hole on a south-facing slope slightly shallower so the sun can hit it and break down pathogens.

:: Bury toilet paper in your cat-hole unless you’re in the desert, in which case you should pack it out. In arid climates, toilet paper decomposes much more slowly, so there is a chance wildlife will discover it or it will wash out in a storm. Also consider “natural” toilet paper—rocks, leaves and snow are all options.

:: Wildlife also like the salts in your urine, so dilute it either with water or by peeing on gravel or pine needles.