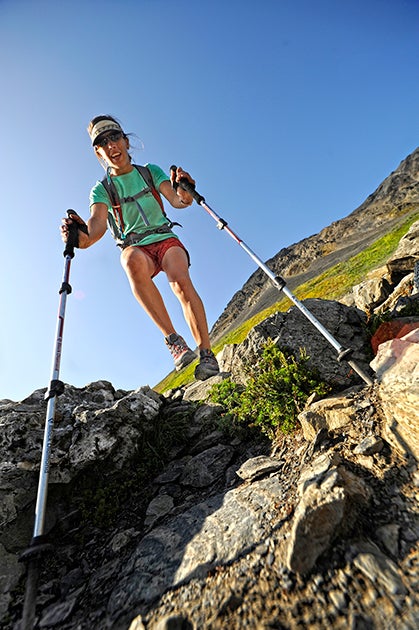 This article originally appeared in our June 2010 issue. Want more? Subscribe to Trail Runner for just $2.75 an issue.

“This is cheating!” exclaimed Karl Meltzer, as he flew through the Grouse Gulch aid station during Colorado’s grueling Hardrock 100-miler. Meltzer was stunned by the helpfulness of the trekking poles he’d picked up seven miles earlier. While he had intended to experiment with the poles for only the preceding section over 14,000-foot Handies Peak, Meltzer ran with them for another 58 miles en route to breaking the counter-clockwise course record (Hardrock annually alternates directions) by nearly two hours. It was the first time he had ever run with trekking poles.

Meltzer’s use of poles was big news in the United States, but “sticks” are commonplace in Europe and many top runners use them at the 166-kilometer Ultra Trail du Mont Blanc (UTMB).

After Meltzer’s record-breaking run last summer, adjustable-length poles began catching on at U.S. trail races. In fact, barely a month after Hardrock, three top-10 Leadville 100-mile runners—Garett Graubins, Andy Jones-Wilkins and yours truly—used poles for the first time in a race.  Seventh-place Leadville finisher Graubins noted, “I liked the trekking poles. They made me feel like less of a pure runner, but they certainly helped on two tough climbs.”

Trekking poles are most useful when climbing. It’s easy to envision a runner on a steep trail, stooped over with hands on knees in an attempt to recruit their arms for propulsion. Now imagine a pole-planting runner gaining those upper-body strength benefits without bending over.  Some runners also find that poles promote a quicker, more efficient cadence when climbing.

Krissy Moehl won the 2009 UTMB using poles for the first time in a race.  When asked if poles helped, she replied, “Definitely! I cranked on those things, especially in the later miles. There are three significant climbs in the last 30 miles, and I was able to really pull on the poles.”

In a longer race, not only could the increased climbing rate help your time, but the poles could leave you with more in the tank late in the race. After Leadville, Graubins said, “I think they saved my legs a tiny bit with each step. And, during a 100-mile race, that sort of molecular-level conservation adds up.”

Gulch aid station during Colorado’s grueling Hardrock 100-miler. Meltzer was stunned by the helpfulness of the trekking poles he’d picked up seven miles earlier. While he had intended to experiment with the poles for only the preceding section over 14,000-foot Handies Peak, Meltzer ran with them for another 58 miles en route to breaking the counter-clockwise course record (Hardrock annually alternates directions) by nearly two hours. It was the first time he had ever run with trekking poles.

Don’t put the poles away before heading down a steep or technical trail. They enhance both downhill stability and confidence, not to mention take the strain off blown quads or a tweaked knee. As a bonus, an expert user slaloms down switchbacks by pushing off the outside of the turn with a pole.

Adverse terrain and conditions can also warrant using poles. For instance, they can add stability when crossing a stream or skirting a puddle, and provide extra traction in mud and slippery conditions. Germany’s Hans Dieter Weisshaar, finisher of around 50 100-milers using trekking poles, recently stopped using them, and dropped out of last year’s McNaughton 100. “It was mud, mud, mud, thick and creamy and slippery,” said Weisshaar. “Most likely with poles I would have finished.”

A pole can turn into a skewer—for example, if you trip and fall on a pointy grip or stab yourself in the lower leg. And toting unused trekking poles (some runners prefer not to use them on flats or mellow downhills) can be awkward.  If you carry them in one or both hands, you’re not free to hold water bottles, eat gels or snap photos from a ridge top. Otherwise, you’ve got to figure out how to stow them in or on a pack you’re wearing.

First adjust the poles to the correct length. With your arm at your side, bend your elbow to 90 degrees and adjust the pole so it is perpendicular to the ground.

Phil Villeneuve, a Nordic skier who also uses poles while running, gives the following advice on climbing technique: “Maximize efficiency by synchronizing opposite foot and pole strikes and pushing-pulling at the same time. It should feel like a natural motion. The poles should be planted even with or slightly behind the foot. The hips should be forward, with the chest and head up. There should be no (or very little) bend at the hips.” He adds that, initially, you should expect sore triceps, biceps and shoulders the next day.

Remember to be courteous when using poles and be aware that some trail races bar their use, such as the Western States and Angeles Crest 100-milers.