Some new twists on trail running 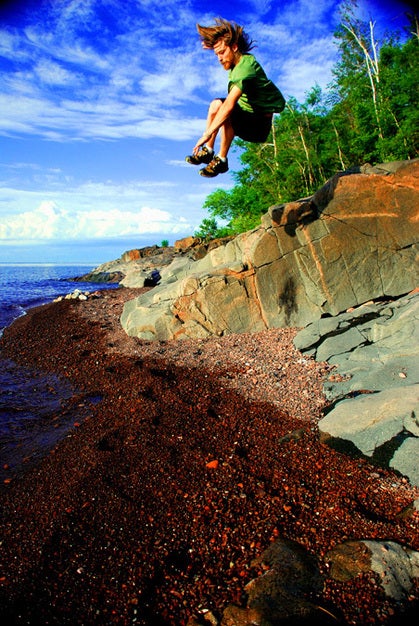 A few years ago I was running on Mount Pirongia in New Zealand with my friends Robbie Walsh and James Cook, when Robbie suddenly sprinted up a tree and did a back-flip. He landed awkwardly and fell over, rolled up with a huge dopey grin on his face, exclaimed, “Cool!” then sprinted toward a large rock outcropping 20 meters off trail.

“I’m going to jump off this rock!” he replied, just before kicking off a tree and propelling himself up the rock face.

I looked over at James, hoping that he might know why Robbie had apparently gone off the deep end, literally. But he just shrugged his shoulders, ran into the forest and spun a 360 off a log.

At the time I had no idea that Robbie and James were avid “free runners.” I thought they were just crazy.

“People have been skipping and jumping since the Stone Age,” explains Walsh, 25, of Duluth, Minnesota. “Children do it without being taught how. It is just human nature to run around in the woods and play. And that’s essentially what free running is.”

The term “free running” was coined in the 1980s by the Frenchman and free-running pioneer, Sébastien Foucan. The strangely ambiguous and open-ended term refers to a style of running that places an emphasis on aesthetics and a runner’s complete freedom of movement.

“Free running is more of a mindset than an activity,” says Cook, 23, also of Duluth, Minnesota. It incorporates a variety of movements such as flips, jumps, rolls and spins, as well as any number of other acrobatic moves to break up the regulated patterns of running.

Free running has its roots in the city, but runners like Walsh and Cook have taken the urban gymnastic moves to the trails.

“I started trail free running when I finally got fed up seeing cool features I wanted to hit on my bike and snowboard, so I just started using them on runs,” says Walsh. “You’ll run a trail a hundred times and as your skills grow, you start seeing new features and new possibilities.”

At first, free running seemed strange, almost childish, but I had so much fun the first time I tried it that I now devote at least one run a week to it. My only goal is to keep moving and have fun. On these runs, I usually never go farther than three miles, but they have not only helped my trail running through increasing my stamina, coordination and flexibility, but also my climbing, whitewater kayaking and snowboarding skills.

“It’s the best cross training out there,” says Walsh. “It improves your body awareness like nothing else, and all you need is a good pair of shoes and a good imagination.”

I started free running by trying to follow Walsh and Cook, a couple of experienced and particularly daring free runners. I wouldn’t recommend staring this way.

Begin by adding an occasional simple “trick.” A high skip off a rock or a few well-timed tree stalls can transform the normal point-A-to-point-B run into a more physically demanding and adventuresome experience.

As you become more comfortable interacting with trail features, you can start taking more calculated risks.

Tricks of the Trade

Tree/Rock Stall. Run straight up a tree or steep rock face as far as you can, let your body pause (you should feel weightlessness just before gravity pulls you back down) and then hop off before you fall on your face.

Rolling. It sounds simple enough, but rolling on the trail can hurt if you’re not careful. Sharp rocks and large roots generally prove disadvantageous when rolling. After you get the hang of it, try rolling more than once, but don’t get too dizzy.

Jumping. Start by looking for natural transitions that will soften your landing, e.g. a gradual rise followed by a slight decline. This will also help you keep your rhythm and be easier on your joints. Rocks and roots usually provide a solid footing to launch from. Always check the landing zone before you jump.

Add a spin. When you feel comfortable jumping, try throwing in a 360-degree spin, but start at slow running speed.

Tweak it. Got the spins down? Twist your body in mid-air so that you become horizontal with the ground while spinning. This is an advanced maneuver that takes commitment, so first master it jumping into a pool or lake.

This article appeared in our February 2009 issue.

Dave Costello, 21, is a writer and photographer living in Duluth, Minnesota.