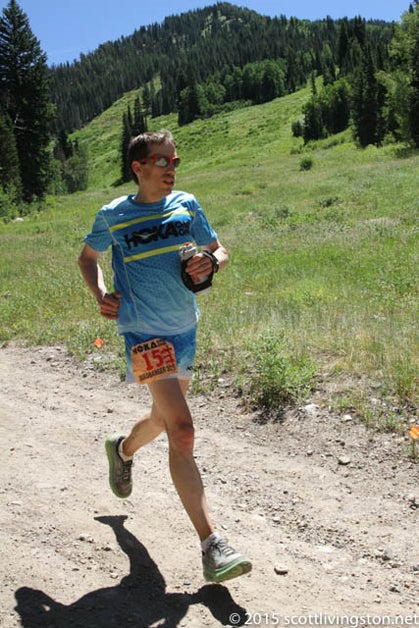 We’ve written before on the importance of not racing too frequently. But sometimes, things happen – a cool opportunity to run a bucket-list race in the mountains comes up, or a group of friends is traveling to a race – and you can’t control when. Sometimes, you’ll want to run two races in one month, or on consecutive weeks, because you’re a runner, and it’s what you do, and life is short.

If you’re not a professional runner, it’s okay if you don’t run your absolute best every time you toe the line. But there are some things you can do to ensure you have the most enjoyable experience at each race you run—and can get back to running fairly quickly after.

For some advice on running well frequently, we turned to Timothy Parr, 33, of Leadville, Colorado. At July’s Speedgoat races in Utah, he raced three grueling mountain courses on three consecutive days. He won Friday’s vertical mile, which featured roughly a mile of climbing over a short course; placed fifth in the brutal 50K race Saturday; and won Sunday’s “Quadbanger,” an 11-mile, all-downhill race in which athletes took a chairlift to the top of the ski hill and ran down, then repeated it multiple times.

The following weekend, he won the 26.2-mile Tushar Trail Race, also in Utah.

In other words, if running frequently in the mountains were a college major, Parr would’ve earned his Ph.D. this summer. Here’s what he had to say about recovery, mental toughness, and how he adjusts his training for frequent racing:

Every day after the race I took a hot shower to stretch out and warm up my leg muscles. This technique works really well for me.

I was also sure to eat and get a good meal as soon as I could. This often entailed eating four or five smaller meals after the races in the early afternoon through dinner.

I tried to get as much rest as possible. This meant, in addition to the sleep at night, I also had a few hours of lounging around doing next to nothing in the afternoons. I spent the next four days low-key, with two days of no running and two days with short easy runs. This got me ready for the Tushar Marathon the following weekend.

After the Vertical Mile, I felt okay. It was an uphill race so I had not destroyed my legs, not like a downhill race can. For the 50K I felt sluggish for sure, but made sure to eat and drink consistently. This helped me run well. I kept telling myself “one thing at a time,” whether it was one race or even getting through the next hill.

I think the races were harder mentally than physically. I started the Quadbanger conservatively and allowed my muscles time to stretch out and warm up. By halfway down the first hill, I was no longer concerned with being tired, I was concerned with racing. Physically I was tired, but the races were equivalent to a hard few days of training.

I’ve modified my training to accommodate [back-to-back racing]. To be ready … your body needs to be able to take a beating. A good training method I’ve found is to try running long on back-to-back days, something like three hours hard one day followed by an easy three-plus hours the next day. However, with all the racing, I’ve had to cut down on my long runs.

I love racing and sometimes I love training … [but] you need to enjoy both. Sometimes if I don’t want to go run, I’ll find a beautiful training run to help mentally, or I’ll call up a friend and run in a group.

I also tend to break my training up so I can go enjoy other activities. Normally, that means mountain climbing for me, but for others it could be biking or kayaking, or any number of activities. Overall, you need to want to race. Without this fundamental undertone then it becomes easy to burn out. By the end of the season I’ll be ready for a break from racing but until then I’ll enjoy the racing!

A Theory About Building Speed While Doing Long Races and Ultras