Your mind runs your race, for better or worse

Jerry is a competitive trail runner who keeps a training log, allows for plenty of rest … 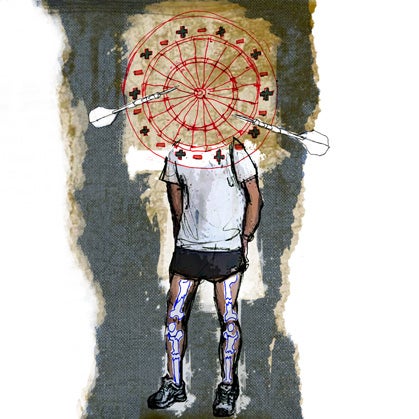 Jerry is a competitive trail runner who keeps a training log, allows for plenty of rest between runs, eats a balanced diet listens to his body. And, yet, he was overly anxious at the starting line of his most recent trail race. Negativity consumed his thoughts: I have to do well, but I hate this heat. I don’t think I can beat Frank. I don’t have enough energy to finish.

Before the gun had even sounded, Jerry’s mind was running a race of its own. A few miles into the race, feeling emotionally drained, he dropped out. Despite such textbook preparedness, Jerry had missed a vital part of training: his mind.

Mental training is the science of improving and enhancing human performance by developing skills such as goal setting, relaxation, visualization and coping with performance anxiety. It is the combination of mental and physical training that best prepares an athlete.

Here, we examine four common race-day mental mistakes and how to counteract them.

Mistake 1: Worrying about what you cannot control
I can’t beat Susan
. After all this rain the trails are going to be too muddy. If you allow yourself to be consumed by anything out of your control, you will grow frustrated and waste emotional energy.

“When I ran the 2011 The North Face Ultra Trail du Mont Blanc in Chamonix, France, a storm came in and threw off the race start by several hours,” says Krissy Moehl, an accomplished ultrarunner in Seattle, Washington. “I had trouble letting go of what my splits were supposed to be, and dropped out of the race.”

WHAT TO DO INSTEAD. When you think of something out of your control, such as bad weather on race day, replace the thought with something you can control. Since Moehl was unable to shift her focus to something she could control, like simply running from aid station to aid station, the race became too overwhelming to complete. “I learned that you have to be prepared to give only what you have on that certain day,” she says, “not what you would have been able to give had circumstances been different.”

Mistake 2: Focusing on the outcome
Obsessing over a specific outcome, like running a PR or qualifying for another race, may cause frustration, because you can only control the process of getting to the finish-line, rather than the finish itself. You may run your best race and still not run as well as you wanted. You must be prepared to accept that outcome.

WHAT TO DO INSTEAD. “Mental energy is similar to muscular energy,” says Luke Humphrey, running coach and professional marathoner with the Hansons-Brooks Distance Project in Rochester Hills, Michigan. “Muscle glycogen is limited so we conserve it till we really need it. Mental energy functions similarly. Don’t waste mental energy thinking about a race’s outcome. Focus on running relaxed and in a good rhythm. Then late in the race when things are really hard, you will have mental-energy reserves.”

Steve DeKoker, an avid runner and head of Brooks Sport’s Inspire Daily program in Seattle, Washington, breaks a race down. “Focus on small goals within a race or long run,” he says. “ I compartmentalize my mental anxiety into segments, and then 26.2 miles, for example, is only 26 individual miles, eight 5Ks or two sets of 13.1-milers.”

Do not make something as familiar as a race become an anxiety source. Adds elite mountain runner Alex Nichols, 26, of Colorado Springs, Colorado, “During races I try to only think about being relaxed and fast. As soon as I start to worry I lose running efficiency. I run my best races when I run relaxed.”

Mistake #4: Using negative words for motivation
Don’t stop. I can’t get passed. While self talk is important during a race, negative words may trigger performance-harming emotions. For example, telling yourself “Don’t stop” might bring attention to your fatigue.

According to a 2000 study comparing negative and positive self talk with tennis players, Dr. Judy Van Raalte and colleagues at Springfield College in Massachusetts, found that negative self talk often stems from mistakes during a poor performance and can inhibit later performances. We’ve all had bad races. And, if we’re not careful, we can let them get in the way of a potentially excellent performance.

WHAT TO DO INSTEAD. Shift focus away from negative (pressure) words or phrases such as don’t, won’t or have to. Use positive words like calm and cool or strong and smooth.

Dr. Janet Shaw, an ultrarunner and exercise physiologist at the University of Utah in Salt Lake City envisioned herself deflecting negativity during a rough patch in her first 100-mile race. “I envisioned Wonder Woman using her bracelets to deflect bullets. But instead of bullets, I deflected my negative thoughts,” she says.

For more tips, visit the Association for Applied Sport Psychology on the web at www.appliedsportpsych.org.