Nowadays, you see running pictures everywhere—Instagram, Facebook, magazines, blogs, websites. And that is not surprising, especially when they feature running off the roads. Trail running takes place in some of the most beautiful settings, so it’s natural to want to capture your friends and fellow runners out in nature doing what they love.

Even though you don’t possess the knowledge and gear professionals use, following a few simple guidelines will help you to up your photo game and be on your way to social-media glory.

It isn’t necessary to shoot a fancy DSLR or mirrorless interchangeable-lens camera. In fact, a late-gen smartphone is capable of capturing excellent, sharp images, and has the bonus that most people carry them everywhere they go. As the saying goes, the best camera is the one you have with you.

While keeping things on the small and light side, a significant step up in versatility and image quality is a higher-end point-and-shoot camera, such as a Sony RX100 or similar, which usually offers optical zooming as well as higher megapixels and better low-light performance. You can shoot in manual mode and save to RAW files for greater processing flexibility.

In general, seek clean backgrounds, i.e. ones without a lot of clutter such as scrappy vegetation, dead trees or man-made structures. If you can find open views, water crossings or interesting sweeps of trail among grasses or lightly treed terrain, you’re off to a good start.

Think about what it is you are trying to convey. Is it the difficulty of the climbs? Beautiful flowing singletrack? An interesting person or feature? Huge ridgelines with big mountain views? A little planning goes a long way. 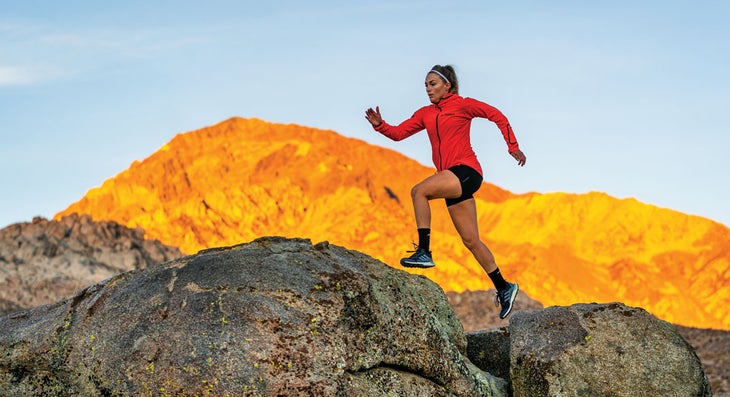 Click here to learn about the 2019 Trail Runner Photo in beautiful Aspen, Colorado, October 6-9, in the height of the fall colors!

The best times of day to shoot are usually sunrise and sunset, as the light quality is soft and pleasing, the so-called “golden light.”

Another plus is that these times offer the opportunity to shoot “backlit,” meaning the sun is lower in the sky, and generally you would place it behind or to the side of your subject. Doing so will cast a beautiful “rim light” on your subject, providing a dreamy overall look while highlighting ridges and other landforms, trees or grasses.

If you want more contrast and richer color in your images at this time of day, then shooting front lit is the answer. If you’re using a phone, front lit will be much easier to shoot, as those cameras don’t offer as much flexibility in processing to pull the details out of the shadows that a backlit image would produce.

Universally, the worst time of day to shoot is midday, when the sun is directly overhead. Shadows are harsh, especially over people’s faces, and the light is bright and washed out. … Unless it is overcast, where the clouds can provide a natural “light box,” evening out and softening the light.

Equally as vexing as midday sun is shooting in mottled light, such as you will find in forests, where contrasting bright light and dark shadow won’t allow your subject to standout from the background.

One-Leg Pirate: This happens when the lower back leg is obscured by the upper leg, appearing that the leg is cut off.

Tree Head: Avoid images with trees or other objects seemingly coming out of the subject’s head.

The Dumpy Landing Shot: Avoid capturing the landing position; rather, shoot for take-off or mid-stride images.

In terms of image composition, i.e. where you place the primary subject in the frame, aspiring photographers should embrace “the rule of thirds,” which basically avoids placing your subject in the middle of the frame.

The rule of thirds divides the frame, vertically and horizontally, into thirds, and anywhere these lines intersect is a good location to put your subject. If your runner is coming into the frame from right to left, putting them in the right third will make it look like they are running into the image.

Also, experiment with angles. Try getting low to the ground, which can help make your subject stand out against the sky or background. Shooting high, like on a hillside above your subject can also provide a nice aerial-like view of your subject, especially if there is a scenic background behind them. Shooting from the side can emphasize a good stride.

A final thing to consider is what type of action or pose are you going for. Are you looking for peak action to accentuate athleticism? If so, choose a section of trail that can bring that out. Capturing a runner on a fast downhill going around a curve in the trail is one possibility. Jumping across, or splashing through a creek while shooting low to the water is another good trick. A technical trail can offer lots of possibilities as well, as long as it’s not so technical that the runner looks like they are scared or tentative.

Don’t be shy about “coaching” your runner(s), even badasses, encouraging them to have their heads up, a pleasant expression, eyes open and relaxed hand position (as if they are holding a potato chip between their thumbs and forefingers).

One thing that will help greatly is shooting in burst mode. Burst mode takes a series of pictures rapidly, therefore allowing you to choose the one that shows off your runner’s form or expression the best. Take-off or mid-stride shots are usually best, as the landing position can often look “dumpy” or “saggy.”

And bright clothes are almost always more appealing than dark ones.

As a final thought, the only way to get better is to get out there and practice—shoot tons of images. And, then, edit them ruthlessly. Unless an image happens to capture a memorable moment that can’t be replicated, get rid of the sub-par shots.

Howie Stern is one of our sport’s most prolific and published photographers.

Click here to learn about the 2019 Trail Runner Photo in beautiful Aspen, Colorado, October 6-9, in the height of the fall colors!

A Ukrainian and a Russian Are Currently Running 3,100 Miles Around a New York City Block for Peace