How you handle the downhills can make or break your next trail race. We asked a really good downhill runner how you can improve your technique. 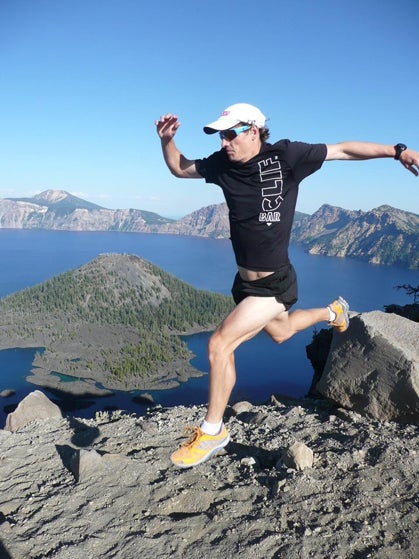 It’s easy to take downhill running for granted. Gravity does the work, and a conscientious runner training for his or her first trail ultra might consider uphill strengthening a better use of training time.

But as anyone who has descended stairs gingerly the day after a trail race can tell you, downhill running is not something to neglect. Poor form is not only inefficient but can blow out your quads long before the finish line, and un-practiced downhill runners can freeze up on technical footing, afraid of a potentially disastrous faceplant.

Running downhills smoothly and quickly will not only be easier on your body – it will save you loads of time in a race that features significant vertical change.

“Downhills are a chance to cover ground quickly with a low heart rate and effort level, burning fewer calories per mile,” says Ian Sharman, 34, who placed seventh at last month’s Western States 100, a course with a net downhill of several thousand feet. (Sharman also coaches athletes at SharmanUltra.com.) “The better a runner becomes, the less they need to brake, and hence the more efficient their use of potential energy becomes.”

That’s why Sharman dedicates a lot of training time on Mount Diablo near his home base of Walnut Creek, California – not just for the climbing, but also to focus on running downhill quickly, smoothly and efficiently.

“When a runner learns through practice to run faster downhill, the mental processing time to decide where to place the next footstep becomes quicker as coordination improves,” says Sharman. “This allows a runner to increase cadence and absorb less impact with every step. Plus, changing direction becomes more rapid, as well as involving less force, because a near full-stop isn’t required again and again.”

We asked Sharman about technique – something he says is more important to speed and efficiency in downhill running than it is in any other aspect of trail running. He offered the following three points of focus:

1. High cadence. “Ideally [land] closer to the front of the foot so the leg doesn’t waste time going ahead of the body on the forward swing. This also forces better posture since it’s much harder to lean backwards or land heavily on the heel.”

2. Landing softly. “Linked to the high cadence, soft and fast footfalls mean that even if the ground isn’t stable, the other foot takes on the weight of the body almost immediately. Then even if the next step is also unstable, again, the ground contact time is minimal, and [the runner] moves on to the next step to get back the stability quickly.”

3. Losing control – a little bit. “Getting out of the comfort zone means the brain works overtime to improve the synaptic connections [and] speed the ability to decide where to step next.”

Sharman says the only real way to improve your downhill running technique (and consequently, your efficiency and speed) is to practice repeatedly, ideally pushing the boundaries of control on occasion. “This is where the learning occurs, not by keeping things slow and steady,” he says.

As for a specific workout? Sharman suggests finding a steep, technical section of hill that will take at least one minute to run down fast. Do fast, one-minute reps to push the envelope on your technical downhill technique. Alternatively, you can find a slightly longer section (Sharman suggests one that will take five minutes) to do a single, longer rep “at an uncomfortably fast pace,” he says, to improve your form as you fatigue from longer downhills.