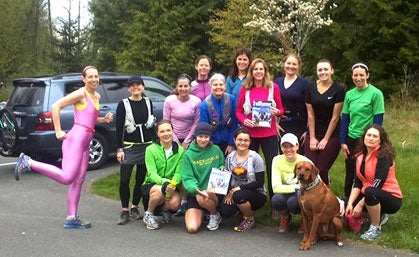 We ran a story on women’s trail-running groups throughout the world in our June 2013 issue. In interviewing the founders of each group, we asked them to share some advice for others interested in starting their own running group—women-specific or otherwise! Here are some of their words of wisdom:

Support Is the Key

Starting a running group requires few things—and they’re all free! You need a love of running, a desire to find other people who like to be with you when you are stinky, struggling or need a push/a hug/or both, the flexibility to change your pace, distance or training plan in order to help your running mates.

Having reliable members who help you run the group runs also helps immensely. One of our WOOT members, Kathleen, was the heart of our group and invited every woman she saw, whether at the grocery store or out eating at a restaurant, to come out and try it. With her friendly persistence, our membership exploded. Another member, Amy, chose the trail we would run every week, enticing women out with alliterative run names that made us all laugh.

Starting a running group is one of the most amazing things I have ever done. But this would not happened without the support from my family and the core WOOT group, who came out and joined in our trail adventures.

I always give the same advice to people who want to start a group. Be consistent. Be there. Never give up. Even if no one shows up.

There was a time December of 2011, when I think I had four weeks where no one showed up, and it was really depressing—but I just kept on going and staying positive. As soon as the race season started in 2012, the fire was burning and there were some great new people who joined up and lives got less busy for some of the stalwart members. And that’s the beauty of our group: it’s flexible but consistent in excellence.

I did, however, start gently suggesting that the fair-weather runners who were afraid of headlamps promise me they’d show up at least once in December of 2012. That made them better runners, too—because getting comfortable running at night is really important for 100-milers or if you’re going to pace someone in 100.

I had fun creating an inviting brand and feel for the High Heel Running Group website 1.5 years ago. The initial response was fantastic. My Facebook debut was more than I could have imagined, especially since I was not a member of the trail-running community before I started the group. Local store owners and race organizers actively spread the word via Facebook and other venues, and I watched membership climb to 150 in a few days. The trail-running community is wonderful.

Build what you would want, and they will come. The runners are out there, and they want to contribute. And a website and/or the networking aspect of Facebook makes it so easy. The first time I tried to form a small group was pre-Facebook. I advertised myself on Craigslist, thinking no one would answer my ad among the others for massage groups and so on. I had 40 responses in three hours. But that group dwindled after a few months, because I had no Facebook page and no website that showed the vision and the group.

How To Run The Western States 100