Tough, but not too tough, love 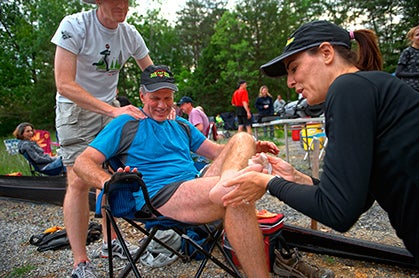 Twenty-Four Hours of Absolution—sounds like a catchy name for a new ultramarathon.

It’s not. In the case of Devon Crosby-Helms and her support crew, it applies to her upcoming run in California’s Western States 100 Endurance Run. When the race starts at 5 a.m., June 26, Crosby-Helms will have 24 hours in which she will not be held responsible by her support-crew members for crankiness, neediness or acts of selfishness. It’s a rule she also employs when she crews for others—as she did for another top female ultrarunner Krissy Moehl at last year’s Western States.

“By giving the runner ‘absolution,’ it takes out the interpersonal conflict or hurt feelings that could arise,” says Crosby-Helms.

An ultrarunner and his or her crew face sleep deprivation, physical exhaustion, potentially inclement weather and other stresses inherent to competition. While such conditions can bring out the best in a person, they can also bring out the worst. In short, a thick skin is vital. But that is just one of the important attributes of a good ultramarathon crew member.

What a Crew Member Does

“My crew members swap out my water bottles, and give me my nutrition and any change of clothing or gear,” says Crosby-Helms, who holds the course record for the

JFK 50 and is among the favorites at Western States. “They treat any contingencies such as blisters and stomach upset.”

But those are just the physical needs. When an ultrarunner is 30, 50 or 85 miles into a race, he is vulnerable mentally and emotionally. A good crew recognizes and addresses those issues too.

Caleb Chatfield of the Kansas City Trail Nerds says his crew members “are responsible for helping me keep my head on my shoulders and giving me something to look forward to at aid stations.”

The importance of a crew to an ultrarunner cannot be overstated. Veteran endurance athlete Lisa Smith-Batchen of Alta, Wyoming, who is midst of an effort to run 50 miles in all 50 states puts it succinctly, “Your crew is your life line.”

Moehl says a good crew member has three primary traits: she is organized, optimistic and nurturing. “But without being ‘a softy,’” she adds.

Organization is critical. In order to succeed, the runner has to be focused on the task at hand—simply running. If a runner is distracted by anything else, he won’t be at his best. It’s the crew member’s job to do the thinking. And, what’s more, to think like the runner.

“You want someone who is capable of attention to detail, so he’ll remember to hand you your favorite cookie at the seventh aid station,” says Jasper Halekas, who placed fourth at last year’s Western States.

And here is where it gets tricky. Even while the crew member is handing his runner a cookie, he has to avoid “babying” the runner. The mind of that runner may be telling hm to quit. The crew member has to veto that thought process and get the athlete to believe in the value of pushing on.

“I pick people who know me and care about me but, more importantly, people who will kick my butt when necessary,” says Smith-Batchen.

Chatfield says there are other important intangibles: “Someone who will allow me to jabber and can put up with my banter. It gets really weird at times.”

Getting the Most from Your Crew

While race-day organization is the responsibility of the crew, pre-race-day planning falls to the runner. Like a dress-rehearsal, this meeting will help ensure that your crew handles things in the manner you want them handled.

“Have a detailed race plan and a list of what you are going to need at each access point,” says Halekas. “Go over it in advance to make sure everyone is on the same page.”

That point is echoed by everyone, some of whom create detailed spreadsheets spelling out their needs for their crew members.

Says Chatfield, “Usually I have everything laid out in advance so all they need to do is follow instructions and give me nutrition when and where I need it.”

Infighting on the crew can lead to an unpleasant day on the trails. That’s why Smith-Batchen takes her pre-race day planning a step further. She creates a hierarchy to limit confusion.

“I pick one person who is the lead crew member. The crew needs to follow my instructions, provide what I need and help me stick to my plan.”

When the Going Gets Tough

It’s almost a given. There is going to be at least one ugly period during an ultramarathon. “Your crew needs to understand what you are going through and be able to ease you along through rough patches,” says Moehl. “A crew member with an uber-positive attitude doesn’t even listen when the runner starts whining or complaining. At Western States last year [Moehl finished second], even if I looked like death, my crew made me feel like a rock star leaving every single aid station.”

“A motherly type is also key for me,” says Chatfield. “It comforts me knowing there is a motherly persona in the mix.”

Crosby-Helms sums it up, “Runners can be cranky and needy, and are by definition selfish.”

Beyond the Finish Line

Even if you employ Crosby-Helms’ 24-Hours of Absolution Rule, you have a responsibility to your crew. Treat them well before and after the race.

Halekas stresses, “Thank them profusely. Treat them to dinner. Buy them presents. Being a crew person is thankless work, but the right crew can save you minutes or even hours in a race.”

Crewing, like ultrarunning itself, is tough. As with an ultramarathon, there will be those who question why anyone would ever want to be part of a crew. But that mindset overlooks the truth of the matter. As a crew member, you are contributing to the success of a fellow human being. His success is your success. You accomplish a goal—where it be winning or just finishing—together.

Otherwise, why would an elite like Krissy Moehl be content on “the sidelines” of an event like the Western States 100? Moehl doesn’t see it as a burden but as an opportunity. “I get to crew for Devon at Western this year for the first time. It is going to be awesome.”

This article was originally published in our August 2010 issue.