Winter got you down? Buck up. Here’s how to make the most of trail running in the colder months 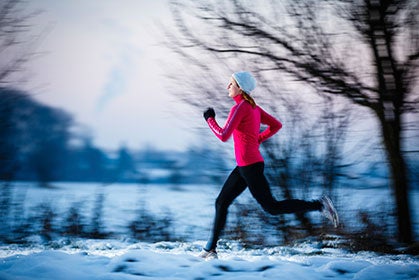 Sure, harsh winter weather can make your favorite trail inhospitable. The snow and ice can wreak havoc on your goal mileage and pace, and you’re practically inviting an injury from slipping and falling. It can be tempting to throw in the towel and hit a treadmill all winter, or to sit inside and despair at being cooped up.

But if you approach it with the right mindset, winter running can be something you look forward to. Here are a few ways to do that:

If you get enough snow, it can completely blanket your favorite stretches of singletrack. Once it gets packed down by hikers, other runners or even fat-tire bikes, it becomes some of the smoothest and most runnable terrain around.

Even if the snow isn’t packed, a good layer of powder can transform your favorite trail into a seemingly new place. On the same route you run all summer, you’ll find yourself trudging on the uphills and flying down descents with unprecedented braking ability and confidence. The scenery is different—and probably quieter and more serene—as well.

So you can’t move at the same clip on a snowy trail as on a dry one? That’s okay—the extra effort of running in snow means you can base your training off of time rather than distance. If you can run six miles in one hour on a dry trail, running four miles in one hour in deep snow on the same trail will give you a comparable training stimulus.

Running on snow and ice can provide some bonus strength training, too. “The uneven, slippery terrain is more of a full-body workout, even if the pace is slow, engaging more muscles, especially in the core,” says Ian Sharman, 34, of Walnut Creek, California, a professional runner and running coach who won the Rocky Raccoon 100-miler in January.

Plus, Sharman says, slogging through bad weather can help make you mentally tough. “You can’t choose your weather conditions on race day,” he says, and running in rough conditions can prepare you if adverse weather hits your goal race.

Sometimes the snowpack isn’t great, and a couple of melts and re-freezes leave the singletrack covered in ice. With the right traction, you can run over the same hill and dale with minimal risk of slipping–though we aren’t just talking about the spirally YakTrax you see people walking and running in on the roads. Kahtoola and YakTrax both make slip-on spikes modeled after mountaineering crampons that can handle all but the steepest, iciest downhill bombs.

For a more economical solution that is probably sitting in your garage, screw several sheet-metal spikes into the bottom of your shoes to provide extra grip on the ice. But if you do this, make sure to A) use an older pair of shoes, or a pair you otherwise don’t mind permanently designating your “ice shoes,” and B) use short screws. You don’t want them poking through the bottom of your feet as well.

If the trails really are impassable, don’t sweat it. Try hitting the pavement. You might enjoy it.

Unless your city has a world-class snow-removal service—as some northern cities do—the sidewalks and paths will probably be covered in snow and ice as well. So you’ll find yourself trudging more than clipping along at a metronomic pace, changing gears frequently and watching your footing. Sound familiar? That’s right: winter road running is a lot like trail running at any time of year. So embrace it, and you just might find yourself looking forward to the change of seasons next November.