How to deal with threatening canine encounters

Suddenly bursting through a thicket, some 15 feet to our right, was a black-and-white spotted dog, baring its teeth … 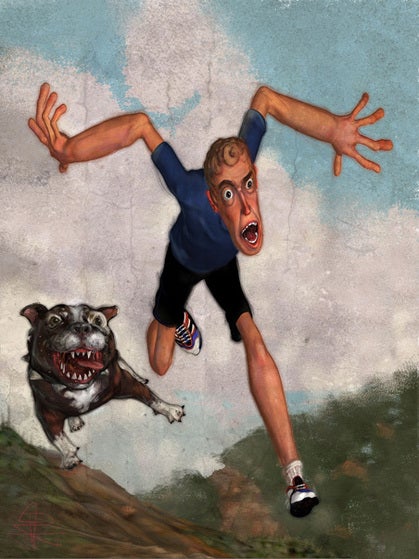 We descended the switchbacks zigzagging down Lookout Mountain outside of Chattanooga, Tennessee. The winding trail gave way to a gravel path behind a line of houses and trailers. We were eight miles in on a 26-mile training run that promised to take five or more hours to complete. My training partner and I talked, enjoying the momentary break from technical footing.

Suddenly bursting through a thicket, some 15 feet to our right, was a black-and-white spotted dog, baring its teeth, and another wild-eyed companion behind it. They lunged toward us, snarling and barking. We had nothing but our water bottles to defend ourselves. We shouted at the dogs, which brought the owner out of a dilapidated trailer to retrieve them, and we were able to back away and move on down the trail. This is a scenario all too familiar for runners.

Long-time runner Karen Smith was not so fortunate. In December of 2009, she was attacked while running less than a mile from her home in Franklin, Tennessee. Smith laced up her shoes and headed out her door as she had done many times, to run a route she knew well and on which she felt safe. On this day, though, Smith spotted the unmistakable shape of a pit bull watching her from a porch as she passed.

In an instant, the animal was in motion, charging toward her. The pit bull launched himself, snapping and biting. Smith was knocked into a ditch and the dog latched onto her leg. “As I was getting up, I got bit in the calf. I started yelling for help,” she says. In the vicious attack, she was bitten several more times, once on the nose. Smith eventually managed to break free and run to a neighbor’s house. She was taken to the ER and received numerous stitches. The dog was euthanized and the owners had to pay Smith’s medical bills.

Smith is back to running, and says, “I love trail running. It is very therapeutic until I see a dog off its leash!”

Teresa Lewin, K-9 specialist for 30 years and VP of Doggone Safe Inc. (www.doggonesafe.com), feels that with more runners on trails than ever, runners coming in contact with unrestrained dogs is a growing problem. “It really is a matter of getting to the [dog] owner’s heart,” says Lewin. “It is their responsibility to love their dog enough to keep them from having the ability to hurt someone.”

Lewin says the enforcement and even existence of leash laws varies greatly. So, you must have a plan of action if you encounter an aggressive, unleashed dog. Lewin recommends the “be a tree” approach to calm a barking or curious dog that is not showing the threat of eminent attack.

“Move away from the dog, turning sideways to it, and avoid direct eye contact,” she says. “Shout. `No!’ or, `Sit!’ with authority. Hold anything you can in front of you to put distance between you and the dog. A stick, a water bottle, a jacket or even a hat can deter a barking dog. Never turn your back to the dog. Back away slowly as soon as the opportunity presents itself.”

For runners unwilling to take a passive approach to personal defense, there are a number of protection devices and products on the market. Lewin warns, “These are only as good as the user and can offer a false sense of security in a dangerous situation. If you are going to carry something, know how to use it.”Dog spray and pepper gel are the most common choices for runners and can be powerful deterrents (Mace Muzzle Dog Pepper Spray is available at www.mace.com; Sabre Pepper Gel is available at www.sabrered.com). Gels are less vulnerable to wind but require greater accuracy than spray. It is important to safely test the spray or gel. Know how it will react in wind; is it a stream or a cloudburst? How far will it reach? The first time you press the button should not be when a charging dog is in front of you.

Dog “dazers” (the Dazer II is available at www.amazon.com) utilize sound waves to deter an attack; results with dazers are mixed. Extendable batons (available at www.defensedevices.com) are telescopic, heavy-duty weapons that can protract from a few inches to nearly two feet. Check with local authorities before carrying a baton.

Be Aware Out There